We are discussing two stocks, VRL and SKT, which operate in the media and entertainment segment. In the recent past, both the stocks have delivered negative performance. Letâs have a look at these stocks.

Sale of Edge at an enterprise value of $32.3 million

The company has informed the sale of wholly-owned promotional solution agency Edge Loyalty Systems Pty to Blackhawk Network (Australia) Pty Ltd for an enterprise value of A$32.3 million. The funds will be used to reduce VRL group debt.

VRL notes that iPic Entertainment Inc (NASDAQ: IPIC), in which the former has a stake of 24.4% has missed a scheduled interest payment for its credit facility. This may further create a default-like scenario for iPic Entertainment.

Dividends: The Board has today declared a fully franked final FY2019 dividend of 5 cents per share.

Outlook: The company has implemented Cost reduction program during FY19, and the management is confident of delivering annualised savings in excess of $10 million across the VRL group. The management cited high-yield ticket strategy demonstrates the customerâs willingness to pay for quality experiences. VRL will launch in a new campaign that will sell the entire suite of attractions and the Village Roadshow Theme Park umbrella brand in September. FY20 will see increased capital expenditure for cinema exhibition segment, led by several upgrades across Village and Event circuits, and the development of the new M-City site at Clayton, Victoria.

Recently, with a market update SKT has informed regarding the change in management of the company. Due to the retirement of Chairman Peter Macourt, the company has decided to appoint Philip Bowman as the new Chairman commencing September 1, 2019.

FY19 Financial Highlights: The company posted revenue at NZ$795.126 million, a decline of 6.7% on y-o-y and posted higher net loss at NZ$ 607.837 million compared to a net loss of NZ$240.674 million during FY18. The net loss includes goodwill impairment charges of NZ$670 million, asset impairments of NZ$44 million and NZ$5 million of other non-recurring costs. EBITDA during FY19 stood at NZ$230.168 million as compared to NZ$285.810 million in previous year. SKT reported FY19 current assets at NZ$160.756 million including cash and cash equivalents at NZ$4.283 million, trade and other receivables at NZ$61.996 million and programme rights inventory of NZ$89,458 million. Property, plant and equipment of the company stood at $ NZ163.217 million followed by intangible assets at NZ$ 50.485 million and goodwill at NZ$395.331 million, respectively. Total equity of SKT stood at NZ$351.568 million as on 30June 2019. The business generated net cash from operating activities at NZ$178.026 million and cash used in investing activities stood at NZ$69.78 millions. 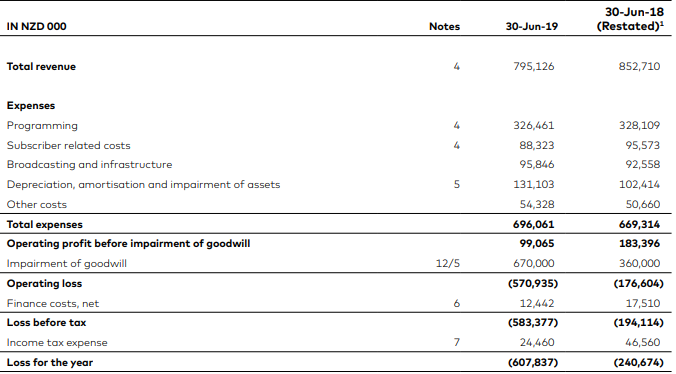 Revenue from advertising sales declined 9.2% at NZ$51.8 million in FY19 primarily due to weakening of market conditions in advertising expenditure. Installation and other revenues also declined by 10.8% y-o-y and came at NZ$14.9 million.

Outlook: The management cited that the current ARPU pressure is likely to continue in FY20 and estimates higher content costs in entertainment and sporting rights for FY20. The company is looking to increase market share across the streaming service segment while the management will also focus on costs controlling strategies to improve operational performances.

CLICK HERE FOR YOUR FREE REPORT!
Tags:
ASX: VRL ASX: SKT
All pictures are copyright to their respective owner(s).Kalkinemedia.com does not claim ownership of any of the pictures displayed on this website unless stated otherwise. Some of the images used on this website are taken from the web and are believed to be in public domain. We have used reasonable efforts to accredit the source (public domain/CC0 status) to where it was found and indicated it below the image.