Copper-gold exploration company, Raiden Resources, operates in Eastern Europe. Its tenements are located in Serbia & Bulgaria, which remains a low cost, mining friendly jurisdiction with relatively underexplored areas. The company has a market capitalisation of ~A$3.69 million, with approximately 410.43 million shares outstanding. 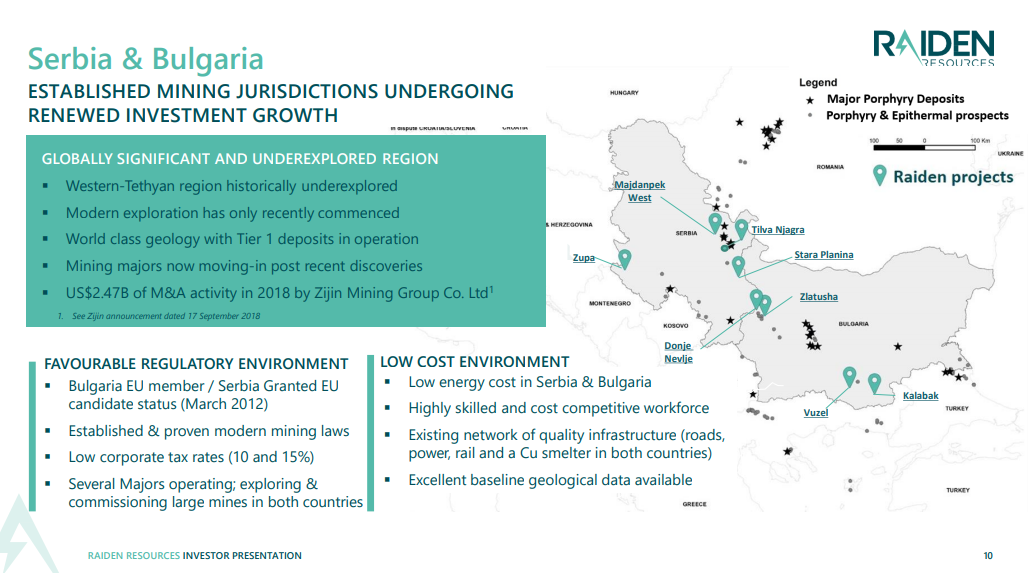 On 20 August 2019, the company released a presentation titled âGrowth Story in a World Class Copper-Gold Beltâ. Accordingly, the company holds approximately 694km2 ground holding in one of the most prolific copper-gold belts with 8 projects secured across Bulgaria and Serbia. Besides, most of the projects are in prolific Tertiary & Cretaceous belts which are dominated by majors, and additional opportunities are under review and applications have been filed.

Reportedly, the global Mineral Exploration spending has declined by nearly 70% since 2012, and major companies despite their cash positions have all but stopped their exploration programs. Meanwhile, Exploration refocussed on brownfield settings, delivering only small incremental resource increases.

Besides, greenfields exploration is the main generator of Tier 1 discoveries and has been almost reduced to zero since 2012. The copper supply would be in the deficit from 2021 onwards, and junior companies now account for 70 percent of global discoveries.

Further, the peak discoveries occurred several years prior to peak spending, due to the huge competitive advantage early movers have in terms of securing quality ground and skills, and Raiden is positioning itself for belt-scale strategic acquisitions in the near term.

Reportedly, the company has the option to earn 75% at the project level, and it is located at 191 km2 in prospective & underexplored porphyry/epithermal belt. Besides, Ada Tepe (Dundee precious Metals â in production) and Rozino (Velocity Minerals) gold deposits both within 10km of license. Further, the company has identified at least two unexplored epithermal gold and porphyry copper prospects.

Reportedly, the company holds an option to buy out 100% of the project (26.5km2), and the advanced epithermal gold target has been defined by the historical drilling & channel sampling. Besides, the main target zone remains untested by drilling, and it represents significant potential for a large gold mineralised system. Now, the company is awaiting final permits by the Ministry of Energy to commence work at the project.

Reportedly, the project includes 85km2 exploration permit in an emerging Pb-Zn-Cu district, which is wholly owned by Raiden. Besides, the project area is considered as highly prospective for polymetallic skarn and manto-type replacement mineralisation. The project is located in a belt, which is experiencing a revival with new high-grade discoveries in Bosnia. Further, the company is targeting skarn/replacement mineralisation on the contact zone with porphyry intrusion and mantos overlying blind intrusives.

Now, the soil program is underway while results are expected in Aug/Sept 2019, and the geophysical survey would define the drill targets, which is expected before the end of the year.

Reportedly, the project is a Joint Venture between Raiden and local company, and the company has an option to buy 100% for â¬0.3 million. It includes two high-priority targets, Aldinac & Gradiste. Besides, the company is targeting structural and intrusion related mineralisation, and reconnaissance drill program was completed, which returned anomalous grades of gold and copper within a large alteration & deformed zone.

Now, the company intends to undertake the follow-up program, including mapping & trenching designed to understand structural controls on mineralisation, and the follow-up drill campaigns have been planned.

Reportedly, the project includes 76 km2 exploration permit adjacent to the high grade Coka Marin deposit and the operating Majdanpek copper mine. In Q3 2018, Rio Tinto completed a helicopter electromagnetic survey (VTEM) covering the entire permit - where several drill targets were defined. Besides, Phase 1 Drilling was completed by Rio Tinto while results are pending, and the company has a free-carried interest in the project.

Reportedly, Western Srednogorie Volcanic Belt has an analogous geological setting to the Timok and Panagurishte districts. The district hosts several outcropping porphyry and epithermal prospects in Cretaceous Volcanics. Besides, no systematic application of modern geochemistry or geophysics has been conducted to date, and the last exploration was in 90âs. The company is currently the largest landholder in the district, and it holds the bulk of the available and prospective geology in the district.

Reportedly, the company could earn up to 75%, and the project has 195 Km2 exploration permit. The project hosts highly prospective Cretaceous geology â seven known epithermal & porphyry occurrences with positive historical drilling. Besides, no modern exploration has been conducted since the â90âs - no airborne geophysics or systematic modern geochemistry has been conducted over the permit.

Now, the company is undertaking data reviews, field program planning, and work would commence following final approvals from the Ministry of Energy.

Reportedly, the project is located in 74 km2 exploration permit under renewal (100% Raiden). The historic mapping & magnetic survey suggests comparable geology to the Cretaceous Timok Magmatic Complex (TMC). Besides, the Yugoslav State had completed two scout holes in the 1960s, both returning anomalous Cu values, and there is significant potential for porphyry & preserved epithermal mineralisation.