Poseidon Nickel Limited (ASX: POS) is an Australian Securities Exchange listed nickel producer and explorer. The business portfolio of the company includes various projects such as Lake Johnston Project, which contains around 10 Exploration Licences (EL) and two general purpose licences along with 10 mining leases. The other projects of the company are Mt Windarra and Black Swan. The Black Swan operations cover an open pit mine-Black Swan, an underground mine-Silver Swan and a Black Swan sulphide concentrator.

Poseidon Nickel Limited announced on 12th June 2019 that the company intersected high-grade nickel sulphides at Silver Swan, which in turn, signifies the continuation of high-grade nickel intercepts at the underground mine.

Such results from Silver Swan Underground Mine are important for the company, as they provide the basis for resource revisions for the Silver Swan project in August 2019. Moreover, Silver Swan is important for a restart of the operations at Black Swan. Silver Swan, which historically delivered some of the highest-grade nickel sulphide assays in the world, is scheduled for completion in June 201, with the remaining assays set for release in July 2019.

POS recently completed initial drilling activities at the Black Swan deposit. The company plans to consider the completed program with the outcomes of Silver Swan’s current 3,000-metre drilling program, as part of the mine-life extension and optimisation of the restart program.

The significant results received by the company are as:

POS delivered a return of -9.52 per cent in one year (as per yesterday’s close), and the YTD (Year-to-date) return on the company’s share stands at -11.63 per cent. However, the one-month returns are positive and are at 2.70 per cent.

Raiden Resources Limited (ASX: RDN), a copper and gold explorer and miner, presented historical trench and drill data on Vuzel Project in Bulgaria reviewed by the company. An exploration program conducted by Gramex generated the data. The program included geochemical soil sampling and geological and alteration mapping. Apart from that, the program contained small drilling coupled with a channel rock chip sampling over the outcropping mineralisation areas.

The significant results of channel rock chip sampling include:

The other results from various trenches are as:

Gramex drilled four holes, which accounted for a total of 530 metres. The four holes intercepted mineralisation and encouraged the company to confirm that the mineralisation by the surface sampling (as shown under rock ship sampling) extends to depth.

However, the drilling did not intercept significant results, and as per the company, it was due to the vague positioning of the drill collars, as they were not positioned in positions that adequately test the highest-grade zone as defined in the trenching.

The results of four drill holes are as:

Anson Resources Limited (ASX: ASN), a lithium chemical developer and the host of Paradox Brine Project, announced on 12th June 2019 on ASX that the company calculated exploration targets of 484 million to 792 million tonnes of brine for four Clastic Zones sampled by ASN during the drilling at its Paradox Brine Project.

As per the company, the targets are conceptual in nature as the exploration is insufficient to classify the target as per the JORC code.

The results of the four clastic zones are as:

The detailed results are as: 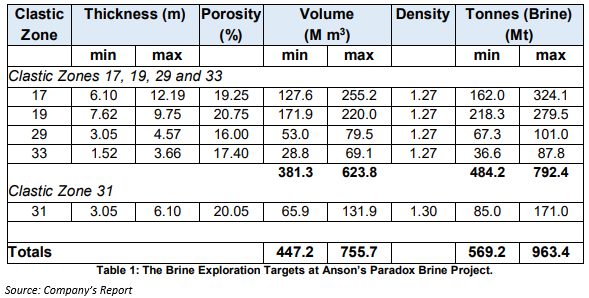