An exploration company, PepinNini Lithium Limited (ASX: PNN) is focused on the exploration of battery minerals; lithium in Argentina and Nickel-Cobalt in Australia. The company's projects are based in the lithium triangle of South America, where 59 per cent of global lithium reserves are found with 33 per cent of the high-grade reserves.

Through its wholly-owned Argentine entity, PepinNini SA, the company holds nine mining leases (mina), totalling 208km2 in the western part of Salta Province, NW Argentina, all occurring within the recognised "Lithium Triangle", which covers parts of Argentina, Chile and Bolivia.

In Salta, the company’s established exploration team has undertaken exploration on the Rincon and Incahuasi Projects. The geophysical TEM (time domain electromagnetic) survey carried out over Incahuasi Salar surface has indicated two distinct zones; firstly, a halite surface layer with a conductive potential brine bearing layer below and secondly a saturated conductive zone from the surface and potentially brine bearing.

In March 2019, the company commenced the brine sampling from monitoring boreholes on the Rincon Project. As part of the process, the company intends to clean the boreholes of drilling fluids and sampling at specific depths for aquifer horizons.

Furthermore, the company also holds four mining leases over 6,840ha, which are prospective for copper and gold, the Santa Ines Project.

During the March quarter, the company raised $1.5 million before costs via private placement and entitlement issue. These funds will be used for re-sampling of monitoring boreholes for brine grade and geochemistry, drilling boreholes (up to 2) for aquifer testing, brine grades and resource statement, analysis of samples, resource modelling and estimation. In parallel, the funds will be used for the general working capital requirements of the company. 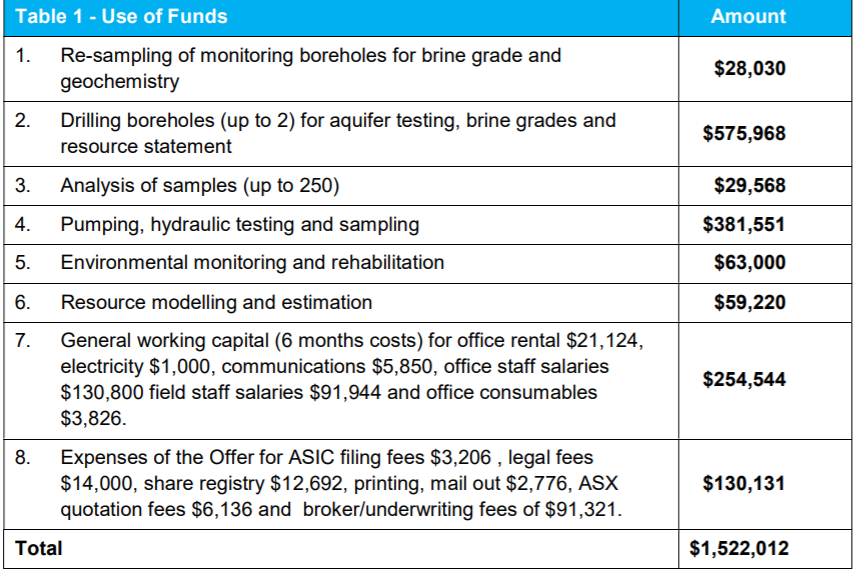 Use of Funds (Source: Company Reports)

The company is focused on cost reduction by minimising overheads where possible and after testing projects divesting those with limited or low potential. The management and staff of the company are also very supportive as they remained committed to the company on reduced salaries to ensure the maximum funds possible are directed towards exploration.