Zip Co Limited (ASX: Z1P) is engaged in the provision of point-of-sale credit and payment solutions to consumers and provide a variety of integrated retail finance solutions to merchants across numerous industries. Lately, the company and its subsidiary, Zipmoney Payments Pty Ltd have been into legal proceedings related to the use of the Zip marks, which according to Firstmac Limited is the infringement of Firstmacâs âZIPâ trademark. The company stated that it has used the Zip mark since June 2013 and Firstmac never raised the issue earlier. According to Zip Co, Firstmac had already ceased offering the âZIPâ home loan product before Zip Co started using the trademark for its business.

In another announcement released to the exchange, the company updated on the appointment of David Franks as the new Company Secretary in place of Andrew Bursill. In another recent announcement, the company highlighted a partnership with Kmart Australia Ltd for offering Zip interest free payments to its customers. The partnership helped increase the companyâs customer base.

Nearmap Ltd (ASX: NEA) is engaged in the business of online aerial photomapping through its 100% owned subsidiaries, Nearmap Australia Pty Ltd, Nearmap US, Inc and Nearmap Remote Sensing US, Inc. The company recently released a notice stating the issuance of 333,000 fully paid ordinary shares on conversion of options to a KMP (Key Management Personnel) of the company. The shares were issued for a consideration of $0.82 per share.

In another announcement, the company reported the launch of its 3D online and beta version artificial intelligence products. The first product launched was Nearmap 3D, which allows customers to stream and export 3D imagery through MapBrowser web application, on-demand at massive scale. The company is also launching the beta version of its artificial intelligence product to provide better customer experience.

For the first half of the financial year 2019, the company reported strong growth in group annualised contract value at $78.3 million, up 42% Y-o-Y, with 107% growth reported in the US and 23% in Australia. As per the management, the companyâs Australian business is working on becoming a market leader and the U.S business is also gaining significant market traction. Revenue during the period reported a rise of 45% on pcp at $35.48 million. Net loss after tax for the period stood at $1.97 million, down 70% on pcp. The company reaffirmed the group cash balance guidance of $81.3 million for FY19. 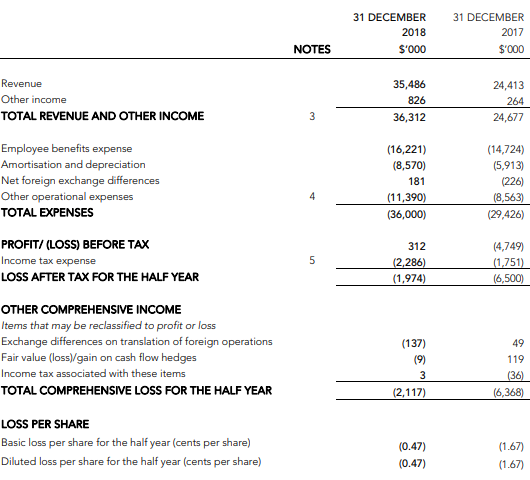 The company recently signed a 7-year contract with Duke Health, a leading US academic medical center.

For H1 FY19, the company reported revenues of $25.3 million, up 59.4% on the prior corresponding period. Revenues in Europe reported a rise of 204%, with Australia and North America revenues witnessed a rise of 30% and 40%, respectively. The underlying profit after tax stood at $9.2 million, up 79.9% on pcp. EBIT margin during the period increased to 51.8%. During the period, a fully franked interim dividend of 3.5 cents per share was declared. In addition, the company also announced a special fully franked dividend of 2.5 cents per share. 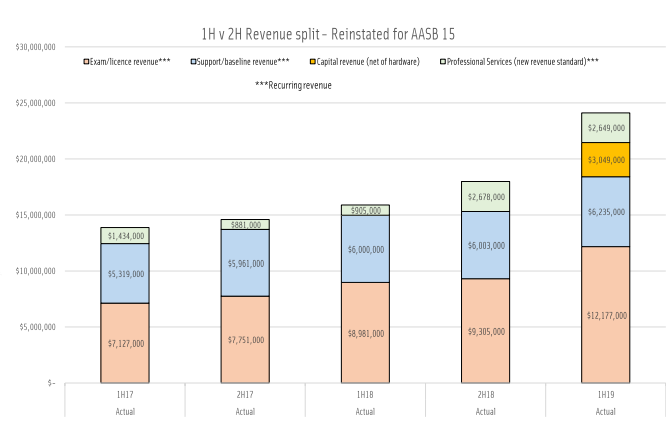 Nanosonics Limited (ASX: NAN) is primarily engaged in the manufacturing and distribution of the trophonÂ® EPR ultrasound probe disinfector and its associated consumables and accessories. The company also conducts research, development and commercialisation of infection control and decontamination products and related technologies. The company recently updated the exchange on the exercise of performance rights and the issue of shares. 5,023 performance rights were exercised under the Nanosonics Omnibus Equity Plan, 5,023 fully paid shares were issued into Nanosonics Deferred Employee Share Plan Trust and 120,205 performance rights were granted under the Nanosonics Omnibus Equity Plan.

During the first half of the financial year 2019, the company generated sales of $40.7 million, up 36% on the prior corresponding period. The companyâs cash balance during the period increased by $1.8 million to $71.3 million. The period also saw a launch of trophonÂ® in North America, Europe and Australia. Another agreement for distribution in Finland, Spain, Denmark and Portugal was executed with GE Healthcare. Appointment of a new distributor in Switzerland also led to geographical expansion.

Silver Lake Resources Limited (ASX: SLR) is primarily engaged in gold mining and processing from the Mount Monger Camp, gold exploration and evaluation of projects. The company recently reverted to ASXâs query regarding an increase in the price of SLRâs securities and an increase in the trade volumes on 17th and 18th June 2019. The company updated that this was a consequence of an increase of around 85% during Q2 re-weighting of the VanEck Vectors Junior Gold Miners ETF.

In an announcement to the exchange, the company updated on the recent drilling activity at Tank South on the SAT Trend at the Aldiss Mining Centre. The company reported that the drilling has provided spectacular gold intersections. These were the widest high-grade intersections ever reported by Silver Lake from Aldiss.

Champion Iron Ltd (ASX: CIA) is involved in the exploration, development and production of iron ore. The company recently released the results for the financial year ended 31st March 2019.

The period saw revenue generation of $655.1 million after the shipment of its first vessel of iron ore concentrate on 1st April 2018. EBITDA for the period was reported at $278.2 million as compared to a loss of $80 million in the prior year due to the absence of commercial production in FY18. Net income for the period stood at $147.6 million against the net loss of $107.3 million in FY18. The companyâs EBITDA margin for FY19 was 42% along with an EPS of $0.20. FY19 saw an operating cash flow amounted to $176.7 million as compared to the fund utilisation of $131.6 million in FY18.

The companyâs growth initiatives during the period included the acquisition of RQâs 36.8% equity interest in QIO, operator of Bloom Lake Mining Complex. The acquisition was completed for a consideration of C$211 million. The company also planned a positive feasibility study for Phase 2 expansion at Bloom Lake. Another initiative included the signing of an agreement with Caisse de dÃ©pÃ´t et placement du QuÃ©bec for preferred share offering for a consideration of C$185 million and fully underwritten credit facility of US$200 million with Bank of Nova Scotia and SociÃ©tÃ© GÃ©nÃ©rale.