The mining industry in Australia has recently been a victim of macroeconomic instability accompanied by regulatory and compliance changes. Top three priorities to mitigate the impact of the above challenges have been the focus on stakeholder expectations, controlling operating costs and access to key talent. Let us have a look at how the following stocks in the industry have been performing recently.

Lynas Corporation Limited (ASX: LYC) is involved in the business of rare earth mineral extraction, primarily in Australia and Malaysia and also in the development of rare earth deposits.

June Quarter Updates: During the quarter, the company generated operating cash flow of $37 million, despite low market pricing for NdPr (Neodymium Praseodymium). At the end of the period, the company had a cash balance of $89.7 million as compared to the closing cash balance of $67.1 million in the March quarter.

The company has seen a drastic improvement in its competitiveness through an increase in production capacity to 7.2 ktpa of NdPr, after the introduction of Lynas NEXT. The company now offers a wide range of products with continuous improvement in the processing costs. As per market data, demand for NdPr is also expected to increase rapidly from 2021.

Lynas 2025: The company expects to grow simultaneously with the growth in the market by establishing a larger business to meet the forecasted demand growth. Through capacity expansion, the company is targeting production of 10,500 tpa NdPr by 2025. In addition, it has a $500 million capital raising plan, which will enhance the long term shareholder value. Through changes in the production, improved portfolio pricing and continued cost efficiencies, the company seek to enhance its earnings over the period.

Financial Highlights: In FY19, the company reported total production of 362 koz at an All-in Sustaining cost of $1,080/oz. The period was marked by a record production and cash flow for Simberi. In addition, the company continued deep drilling and exploration at Gwalia. Operational cash contribution for the period was reported at $284 million as compared to $349 million in FY18. Cash contribution from Simberi amounted to $98 million in FY19 as compared to $82 million in FY18. The company has $111 million of cash at bank at the end of the period.

The acquisition of Atlantic Gold during the year has provided the company with an expansion pipeline and exploration potential, adding a low cost operation to the business. 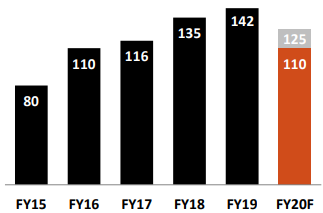 5-Year Strategy: Over a period of five years, the company aims to diversify its production base and create a portfolio of robust operations. SBM aims to strengthen its operations through a quality growth pipeline and continuous people engagement to achieve extraordinary results.

New Business Goals: By generating energy out of non-metallic residue produced from the shredding process, the company aims to expand its operations into waste-to-energy. Currently, installation of 7 plants is being planned within a period of 10 years. The company also aims to expand its business model into other parts of the world by adopting the expertise from the JV with LMS Energy. Over a tenure of six years, SGM plans to acquire or build sites with a minimum capacity of 50 megawatts.

Alacer Gold Corp (ASX: AQG) is engaged in the mining and exploration of mineral deposits in Turkey. The company recently released an announcement for the issue of CHESS Depository Interests for the purpose of transfer of securities between CDIs and common shares listed on TSX.

In another recent update, the company announced that its sulphide plant passed the lendersâ completion test. This led to the release of the parent guarantee and reduction of interest rate margin to 3.50% - 3.70%.

Financial Highlights: During the six months ended 30th June 2019, the company reported gold production of 188,853 ounces, comprising 95,234 ounces from the oxide plant and 93,619 ounces from the sulphide plant. During the period, AISC amounted to $692/ounce. This led to a reduction of $54 million in net debt. During the period, the company sold 192,260 ounces of gold, resulting in proceeds of $252 million. Cash flow from operating activities was reported at $59.8 million. 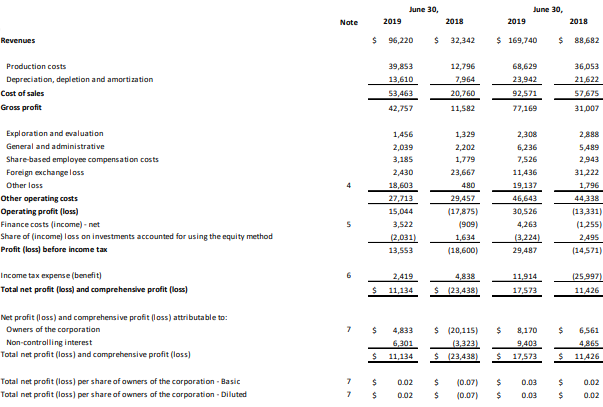 During the 12 months to 30th June 2019, the company reported production of 305,436 oz at an AISC of US$924/oz. In the June quarter, the company made significant progress with the achievement of sustained rates of commercial production at the Syama Underground Mine.

FY19 Guidance: The company revised the previous production guidance of 300 koz in FY19 to 400 koz. FY19 cost guidance was also revised from US$990/oz to US$960/oz. Annualised FY19 production and cost guidance stands at 490 koz and US$920, respectively.