The infant formula market is progressing well and working towards the country’s economy. Let’s have a look at three infant formula stocks A2M, BAL and WHA with their recent updates.

A consumer staples sector company, The a2 Milk Company Limited (ASX: A2M) sells, produces and markets infant formula and branded dairy products for the consumers across the globe. On 21st June 2019, the company updated the market about the announcement made by China’s State Administration of Market Regulation and bureaus and other ministries highlighting the successful implementation of e-commerce legislation related to all goods and services transacted through e-commerce platforms.

The announcement consists of the following key focus points:

In the Macquarie Australia Conference Presentation, the company reported its operational and financial performance. The macro consumer trends such as increased consumer demand for health and wellness products, the growing middle class in Asia and food safety, naturalness and provenance have fueled the company’s momentum. A2M continues to be well supported by its strategic supply partners like Synlait and Fonterra. While The a2 Milk Company Limited inked a five-year minimum supply agreement with Synlait and has exclusive supply rights for infant nutrition into ANZ and China, it has emerging markets and multi-product partnership with Fonterra and is building capacity to support future growth with the development of milk pools in Australia and New Zealand.

The company earlier noted the appointment of Chief Financial Officer for its China segment.

In 1H FY19, the group reported robust financial results with continued momentum and market share position in each region. The group revenue witnessed a rise of 42% on the pcp and stood at NZ$938 million in 3Q FY19, which represented continued sales growth in nutritional products and liquid milk. In 1H FY19, the group reported revenues and EBITDA of NZ$613.1 million and NZ$218.4 million, respectively, reflecting growth of around 41.0% and 52.7% on pcp. 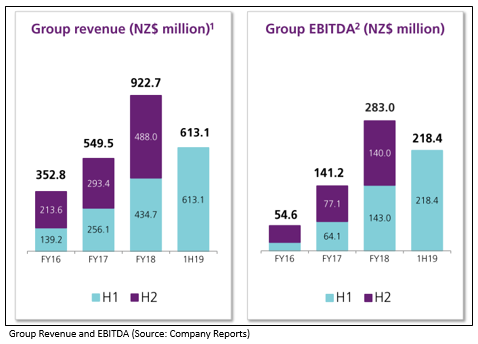 A2M invested heavily in both internal and external capabilities in 1H FY19, which has continued in the second half and the company intends to continue the flow of investments in FY20 as well. A2M is reinvesting the benefits of scale into increased marketing activities in 2H on the back of growing market share in China and a strong first half performance, which will develop brand awareness, predominantly in the USA and China.

Bellamy's Australia Limited (ASX: BAL) is a distributor and producer of branded food products. It was officially listed on ASX in 2014. Recently, the company via release communicated that the State Administration of Market Regulation has approved a label and artwork change in the currently registered ViPlus Dairy’s bovine formula-series. The change in label and artwork approved the Bellamy’s owned trademarks, brand and artwork. In addition, the formula-series will be sold and marketed by the company and its network of distributors and will be manufactured at the ViPlus Dairy facility, which is located in Toora, Victoria.

The company will be investing $4 million to $6 million depending on the performance in order to transition the products and to secure a long-term production capacity with ViPlus.

The company in another announcement stated that one of its substantial holders, namely JPMorgan Chase &Co. and its affiliates made a change in their holding from 5.01% to 6.71% on 4th March 2019.

The financial results of the company were impacted by lower revenues and scale. In its core business, it witnessed a decline of 24.9% in revenue because of SAMR delay, slower category and reduced trade inventory. The direct costs were impacted by supply chain changes and scale and are expected to return to around 5% of revenues. The Camperdown facility was adversely impacted by external third-party revenue timing and is expected to breakeven for the full year. 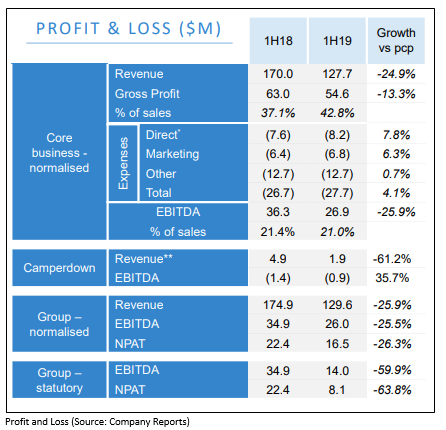 The Group’s cash position witnessed a substantial rise by $7 million to $95 million. The cash conversion in the period was impacted by the cyclical phasing of creditor payment cycles and structural changes in the company’s supply chain as a result of direct sourcing strategy. 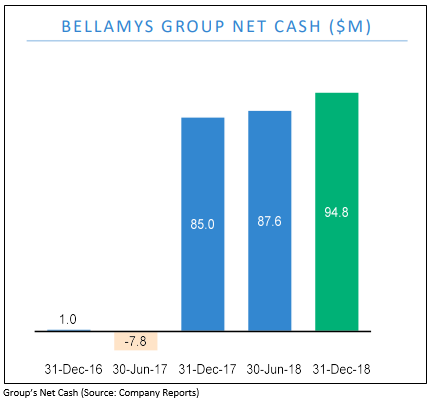 Following the results reported in 1H FY19 and early Q3 trading, the company is expecting the full year group revenues to be in the range of $275 million to $300 million. The company revised its FY19 group EBITDA margin guidance to be in the range of 18% to 22% on a normalised basis, which reflects an increased investment by the company in its marketing and China team. The company continues to maintain zero debts levels with open access to $40 million debt facility.

The company’s liquidity position (Current ratio) amounted to 4.84x in 1H FY19 against the industry median of 1.42x. This represents that the company is in a sound position to address its short-term obligation compared to the broader industry. The gross margin, EBITDA margin and net margin for the period stood at 27.2%, 1.6% and 6.3%, respectively. (Source: Thomson Reuters).

Wattle Health Australia Limited (ASX:WHA) is involved in sourcing, development and marketing of healthy dairy foodstuffs. It was officially listed on ASX in 2017. On 21st June 2019, the company inked an extension with Mason Group Holdings Ltd till 31st July 2019 in order to conclude the proposed acquisition of Blend and Pack, which is a CNCA accredited manufacturing facility.

About Blend and Pack

It is a first CNCA accredited dairy product manufacturer involved in the processing of the dried dairy products for international nutritional dairy and major domestic companies.

In another announcement made on 9th May 2019, the company noted that it will dismiss the undrawn Prospere Advisors Ltd loan, announced on 14th June 2018, to partly finance the construction of the organic spray drying facility through Corio Bay Dairy Group Ltd.

CBDG is a joint venture agreement between Organic Dairy Famers of Australia, Niche Dairy and Wattle Health Australia Limited to manufacture Australia’s first dedicated organic nutritional spray dryer. The construction of organic nutritional spray dryer is in the process of taking shape with the commissioning of the plant scheduled in the first half of 2020 and remains within budget.

In the first quarter of the calendar year 2019, the company finalised a supply agreement with International Supplies and Distribution Co for the supply of dried dairy baby formula into the Chinese market. During the quarter, CBDG has signed a contract to supply Australia’s first commercial quantity of Organic A2 fresh milk to be processed into dried organic base dairy products. The net cash inflow from the operating activities for the period amounted to $1.56 million, including administrative and corporate expenses, staff costs and advertising and marketing spend of $6.6 million, $7.46 million, and $4.44 million, respectively. 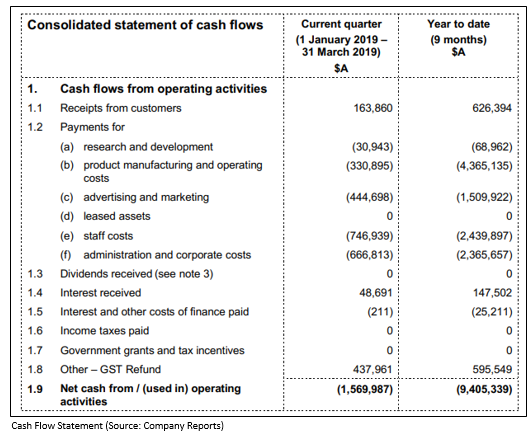 The company’s liquidity position (Current ratio) stood at 12.94x in 1H FY19 when compared to the industry median of 1.42x. This represents that the company is in a sound position in order to address its short-term obligation compared to the broader industry. (Source: Thomson Reuters)

Let’s look at the comparison of five-year returns generated by milk formula manufacturing companies. The a2 Milk Company Limited witnessed a huge return of 446.50%, while BAL and WHA generated returns of 107.30% and 174.33%, respectively.