Afterpay Pty Limited, a subsidiary of a technology-driven payments company, Afterpay Touch Group Limited (ASX: APT), was recently given notice by AUSTRAC, an Australian government financial intelligence agency, to carry out an audit in respect of its AML/CTF compliance.

In terms of this notice, the company now submitted details of 3 candidates to AUSTRAC to conduct the external audit, as announced on Wednesday, 26th June 2019. In addition, the company has put in place a dedicated Sub-Committee, which will assist and report to the Afterpay Board with regards to the oversight and management of the external audit process.

On AUSTRAC notice, the company has assured that it recognises the importance of work undertaken by AUSTRAC and reiterated that it welcomes the opportunity to continue to work in tandem and constructively with AUSTRAC. The company sees this process as an opportunity to make sure that it is in compliance with AML/CTF.

Following the AUSTRAC Notice, the company has now decided to defer its recently announced share purchase plan until the final audit report and its recommendations are being considered by the company.

It is to be noted that the Record Date of 7th June 2019 for SPP will continue to be the same and SPP will be capped at $30 million. Furthermore, the company is planning to issue shares at the lower end of $23.00, being the Placement price, and the 5-day VWAP (volume weighted average price) of the companyâs shares up to the Closing Date of SPP.

Today, the company also announced its Co-Foundersâ intentions related to the Future Share Sales. As per the companyâs release, both the Co-Founders Anthony Eisen and Nick Molnar are excited about the potential to build an Australian-listed global technology company and in addition, the company has assured that Anthony and Nick do not intend to sell any further shares during the next financial year.

At the time of receiving AUSTRAC notice, Afterpay assured that it has undertaken various measures to strengthen Afterpayâs AML/CTF framework, including in focus areas identified in the Notice. In parallel, the company has informed that it is continuing to invest in further AML/CTF compliance enhancements and do not expect any impact in a way the customers and merchants are currently experiencing the Afterpay service.

The company understands that the Buy Now Pay Later industry is new to the regulators, which is why the company intends to work closely with AUSTRAC for developing appropriate compliance regime, which will be specific to the companyâs business.

On the operational front, the company has been performing strongly with underlying sales of $4.7 billion for 11 months to 31 May 2019, 143% higher than pcp. At the end of May 2019, the company had over 4.3 million active customers, representing a growth of around 7,900 new customers per day since 31st December 2018. In the US market, for 11 months to 31st May 2019, Afterpay underlying sales were around $780 million driven by the customer and merchant demand. 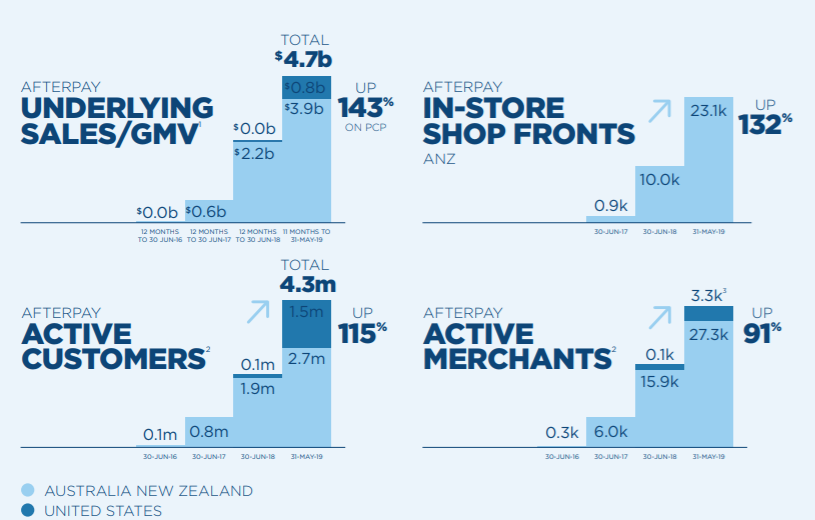 A financial solutions provider, FlexiGroup Limited (ASX: FXL) is focused on driving its customer value propositions through improved usage of technology to deliver great user experiences, cost efficiencies and simplification. The company has a strong track record of financing Australian and New Zealand lifestyles through humm platform. The company supports its customers in financing their lifestyles as humm gives them the ability to finance in a way that helps with the affordability and management of their household budget. Various fashion retailers, home improvement retailers and health providers have joined the humm community.

During the first half of the financial year 2019, the company gained 272k new customers for its products, resulting in an active customer base of 1.24 million and along with this, the company also added 5,000 new retail partners to its network, which increased its valued partnerships with retailers across Australia and New Zealand to 62,000.

During the period, the company announced its first retail apparel fashion partnership with Premier Retail which is a leading global operator of the retail brands with a portfolio of more than 1,200 stores spanning Australia, New Zealand, Asia and Europe.

During the half year period, the corporate debt increased by $47 million on a Y-o-Y basis and gearing increased to 70% from 44% in pcp. The company further stated that it will continue to optimise its business through simplification, consolidation of platforms, refining funding structures and the continued integration of the group functions.

Zip Co Limited (ASX: Z1P) and its subsidiary, Zipmoney Payments Pty Ltd have been notified that Firstmac Limited has started proceedings in the Federal Court against Zip Co Limited alleging infringement of Firstmacâs âZIPâ trademark, which is registered in respect of financial affairs. Zip Co Limited has been using the Zip marks extensively since the business began six years ago in June 2013 and has since partnered with more than 14,000 retailers at more than 30,000 points of acceptance and has more than 1.2 million customers.

To defend the proceeding, Zip has engaged law firm, Corrs Chambers Westgarth and assured investors that it will continue to be able to use its trademarks. The company also communicated that it is concerned by the recent activity of Loans.com.au Pty Ltd related to the home loan and debit card products being promoted by reference to âZIPâ. The company is now deciding an action to be taken in relation to this conduct.

The company recently appointed highly experienced David Franks as Company Secretary, stepping into the shoes of Andrew Bursill. In his over 20 years of experience, David Franks held various senior level roles in various listed and unlisted public and private companies.