Popular Stocks Sometimes prevailing conditions or the new developments in the market in an individual company or industry affects the shares’ trading volumes and price movements. These movements generally occur due to events that may materially affect the fundamentals of the companies. Let’s look at the examples of such cases, where the stocks had witnessed popularity due to material developments that trigger the investment sentiments of investors, which can be either negative or positive: Let’s have a look at the two popular stocks as follows: Resolute Mining Limited (ASX: RSG) Resolute Mining Limited (ASX: RSG) is a gold exploration company based in Australia. RSG is an experienced player in the business and had operated in nine gold mines across Africa & Australia with a production of 8 million ounces of gold. RSG has demonstrated continuous twenty-five years of gold production and is one of the largest gold miners listed on ASX. Recently, the miner had been focusing on its gold hedging program and the Syama Automation Project. RSG has released information pertaining to the activities of the above-mentioned project and program. On 6 June 2019, RSG announced that it had forward sold 30,000 ounces of gold at an average price of US$1,337 per ounce, and the delivery is scheduled of 5,000 ounces between July 2019 and December 2019. It was reported that the RSG has capitalised on the prevailing rates of the gold market to secure price certainty for a part of upcoming US Dollar revenues from the Syama Gold Mine in Mali. As per the announcement, the company’s forward gold sales program had sold 35,000 ounces of gold at an average price of US$1,323 per ounce, before the sale of recent 30,000 ounces sale. Also, Resolute’s gold book now consists of 160,000 ounces, scheduled to deliver out per month till June 2020, and these 160,000 ounces include 65,000 ounces in US$ and 95,000 ounces in A$. Upcoming Initiatives The company’s recent presentation was released on 23 May 2019, wherein the innovation capabilities of RSG had been showcased. RSG is gradually transforming its mining operation into automated mining through its ongoing Syama Automation Project at Syama Gold Mine in Africa. It is reported that automation would improve the efficiency in controlling production, optimising the process and reduce costs. 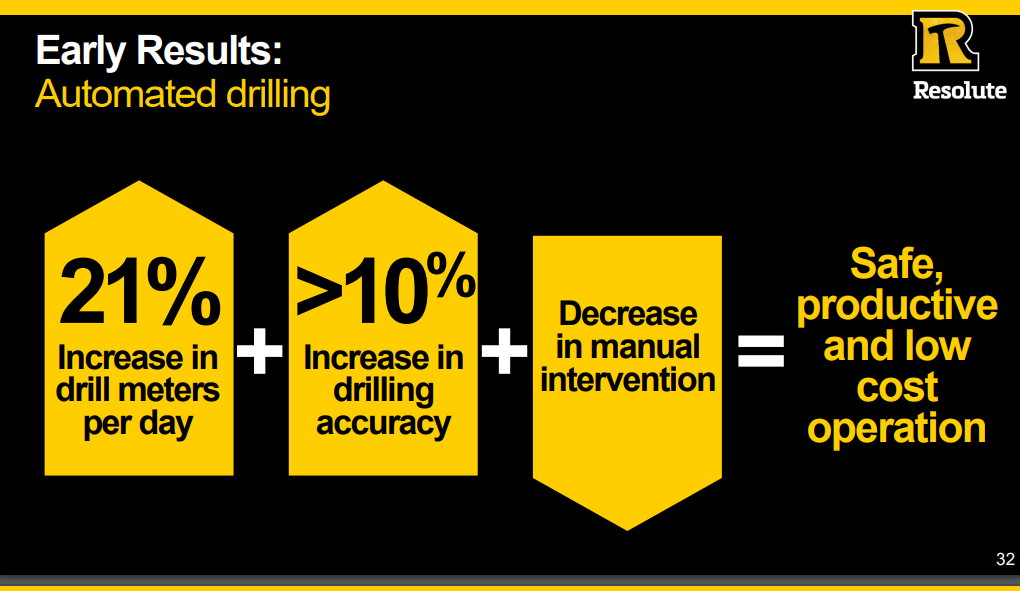 Early Results from Automation (Source: Company’s Austmine 2019 Presentation) As per the presentation, the Optimised Automated Production consists of – Automated mine, which is remotely operated for autonomous drilling and haulage; meanwhile, the other is digital mine, which would track and visualise the operations along with task scheduling and optimisation. Also, automate mine would result in a gain of 15-20% and digital mine would result in a gain of 10-15%. The stock of the company last traded at A$1 (as on 11 June 2019), down by 1.478% from the previous close. Performance of the stock in the periods of one-year, six-month, three-month and one-month are -21.32%, +1%, -9.78% and -7.73%, respectively. Bank of Queensland Limited (ASX: BOQ) Bank of Queensland Limited (ASX: BOQ) is based in Queensland, Australia. It is one of the leading regional banks of Australia, which is ranked one among hundred companies based on market capitalisation on Australia Security Exchange. Virgin Money Australia, BOQ Finance, BOQ Specialist and St Andrew’s Insurance are the group companies which comes under the BOQ. Leadership Changes Recently, BOQ announced Mr George Frazis as its Managing Director & CEO with effect from 5 September 2019. It is reported that Mr George Frazis has spent 17 years in banking, with Westpac New Zealand, St George Banking Group, NAB, CBA and BCG and he had begun his career with the Royal Australian Air Force. BOQ had also announced that Mr Roger Davis would retire from the bank, post the release of full-year results in October 2019, and his subsequent retirement from the Board is also scheduled at the end of October 2019. It was also reported that Mr Patrick Allaway had been selected as the Chairman Elect, and the Board is thankful to Mr Davis for his eleven years of service to the Board, during the one among the most transformative periods in financial services. Financial Review On 22 May 2019, the bank released half-year letter to shareholders by the Chairman, Mr Roger Davis. The letter intended to update on the bank regarding the first six months of BOQ’s 2019 financial year, wherein significant changes in the regulatory requirements and customer expectations leading to higher costs were incurred at BOQ as the focus on conduct, compliance and meeting customer and community expectations were increasing. Reportedly, these significant changes in the regulatory requirements were the result of Final Report from the Royal Commission. The bank also provided an expected schedule of 2019 financial calendar.

2019 Financial Calendar (Source: Chairman’s Letter to Shareholders, May 2019) As per the letter, the industry has been facing ongoing reductions in house prices in the major cities and earnings had been impacted by several revenue headwinds, which had contributed to weaker than expected financial performance for the February 2019 half period. 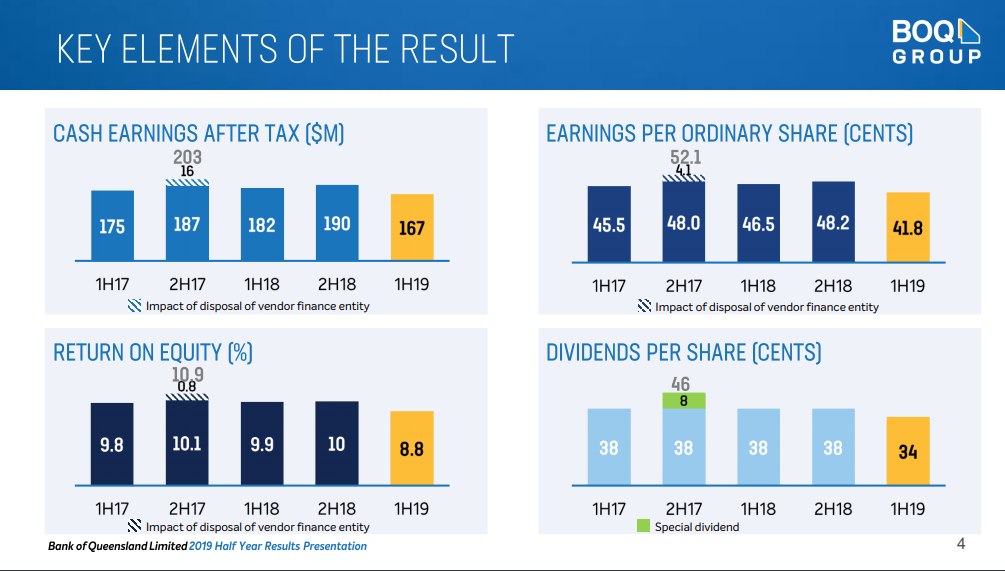 Key Earning Figures (Source: HY Investor Presentation, April 2019) In the half-year period ending on 28 February 2019 results, released in April, BOQ reported a decrease of 8% in cash earnings after the tax of $167 million in 1H19 against $182 million in 1H18; this was followed by a 10% decrease in basic cash EPS to 41.8 cents in 1H19 against 46.5 cents in 1H18. The bank announced a fully franked first-half dividend of 34 cents per share down (paid on 22 May 2019) down by 4 cents per share against the previous corresponding period. On 11 June 2019, the stock of the company closed the market session, at A$ 9.57 up by 0.631% from the previous close. The performance of the stock in the periods of one-year, six-month, three-month and one-month are -5.65%, -2.36%, +3.48% and +7.7%, respectively. The annual dividend yield of the stock is currently at 7.57%, and its year-to-date return is at +0.85%. Disclaimer This website is a service of Kalkine Media Pty. Ltd. A.C.N. 629 651 672. The website has been prepared for informational purposes only and is not intended to be used as a complete source of information on any particular company. Kalkine Media does not in any way endorse or recommend individuals, products or services that may be discussed on this site. Our publications are NOT a solicitation or recommendation to buy, sell or hold. We are neither licensed nor qualified to provide investment advice.
All pictures are copyright to their respective owner(s).Kalkinemedia.com does not claim ownership of any of the pictures displayed on this website unless stated otherwise. Some of the images used on this website are taken from the web and are believed to be in public domain. We have used reasonable efforts to accredit the source (public domain/CC0 status) to where it was found and indicated it below the image.