Generally, companies engaged in mining are susceptible to underlying projects, changing regulations, government interference and volatility in terms of metal prices, among others. The development of projects and commencement of mining takes a long period to convert the process into revenue. The news related to the development of the projects is highly price sensitive and hence, impact the performance of a stock. The earnings are highly dependent on asset/project development. The financials also tend to be highly volatile in terms of operating and net profits and the earnings are highly dependent on the asset/project development. Here, let’s discuss two stocks, OGC and WSA with their recent updates.

OceanaGold Corporation (ASX: OGC) is engaged in the production of gold, with assets spread in the US, New Zealand and the Philippines. On the North Island and South Island of New Zealand, OGC operates the Waihi Gold Mine and Macraes Goldfield (the largest gold mine in the country). OGC also operates the Haile Gold Mine, which is a high-margin asset situated in the US.

The Nueva Vizcaya Governor ordered the local government to prohibit any activities of OGC. As per the order, a local government unit prohibited a truck to access the mine site on 1st July 2019. Although the operation is continuing, OGC stopped the movement of the truck to alleviate the further escalation of the matter. However, the company updated that this prohibition has not disturbed the shipments of copper concentrate supply.

The company recently negated the rumour related to the halted operation of Didipio Mine. The company clarified that in the month of March 2018, it had applied for the renewal of Financial or Technical Assistance Agreement with the Government of the Philippines, which was confirmed on 20th June 2019. OGC also stated that it intends to operate the mines as per the regulations and laws, and will fulfil its role and responsibilities within its pact with the Philippine government.

The company in another update informed investors about the change of interest for its substantial holder, Van Eck Associates Corporation, which has reduced its voting power from 12.52% to 11.51%.

Highlights of FY18 Performance: OGC in FY18, generated operating cash flow of $346 million, which also included $96 million in 4Q. The company generated ~$121 million of free cash flow during the period with a cash balance of $108 million, an increase of 47%. The net debt on the balance sheet declined 59%, depicting a strong cash flow. The annual turnover for the period stood at $773 million, posting a growth of 7% as compared to the prior period. FY18 EBITDA stood at $364 million, with an adjusted net profit of $124 million. The company saw an EBITDA margin of 47% for the period and is achieving positive returns on the invested capital.

The company announced its first dividend for 2019 of $0.01 per security with a total distributable dividend of ~$6.2 million. The payment of the dividend was made on April 26, 2019.

Going forward, OceanaGold anticipates the Horseshoe Underground Project to begin the production in late 2020 or early 2021.

Western Areas Limited (ASX: WSA) handles the mining, processing and sale of nickel sulphide concentrate. The company very recently updated that the initial capital works at the Odysseus Project are finished as per the plan and budget. With this, the company is on track to deliver its first nickel ore in the early part of 2023.

The company recently updated the market about the laboratory assays for Phase I of 2019 drill program for the Mt Alexander Project. The company revealed about the findings of further thick intercepts of high-grade nickel-copper cobalt-PGE sulphide mineralisation.

1H19 Performance Highlights: The company delivered excellent production growth from the Forrestania operations, which is progressing well for the Odysseus Project after the release of DFS (definitive feasibility study). The period was quite unstable in terms of nickel prices and the anticipated rise in the unit cost of nickel production was broadly similar to the guidance given for FY2019. WAS enjoys the debt free status on the balance sheet, which provides further space for funding its active growth projects like Odysseus, along with exploration in the near term.

Top line for the company came in at $123.7 million with an average realised price of nickel increased by 9% to $7.45/lb. The company, for the period, reported NPAT (Net Profit After Tax) of $150k. Operating cash flow for the period stood at $43 million with cash at bank of $134.3 million. 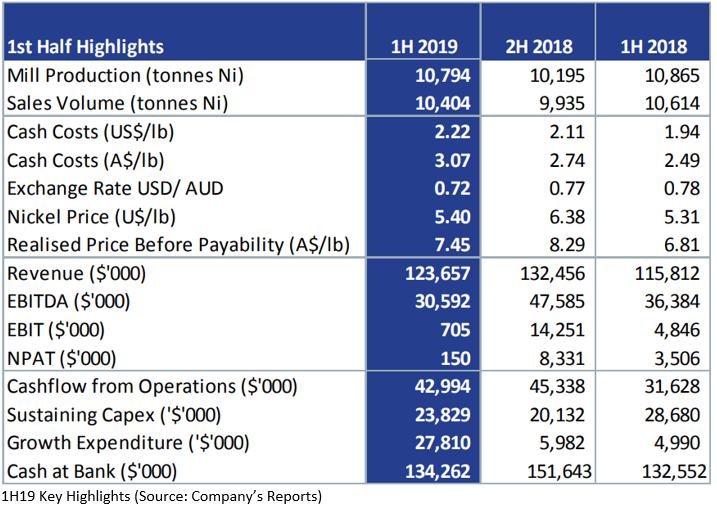