Gold Extraction, as the name suggests, is a process in which the extraction of gold takes place from its ore.

About Gold mining: Extraction of gold through mining is known as gold mining. The mining process begins with the identification of the best places where companies can commence their mining process based on the ore samples collected by the geologists. Once the mining engineers locate the place where the gold is situated followed by the understanding of the materials surrounding it, the mining process begins. In case the gold is situated at or closer to the surface, then these mining engineers use open-pit mining technique for the extraction of gold.

In case the gold is located much below the surface, then these mining engineers follow underground mining approaches to extract gold.

In this piece of article, we would cover the recent updates of two gold stocks OceanaGold Corporation and Resolute Mining Limited.

About the company: OceanaGold Corporation (ASX: OGC) is an international, mid-tier gold mining company from the metals and mining sector. Its assets are located in the US, Philippines and New Zealand. 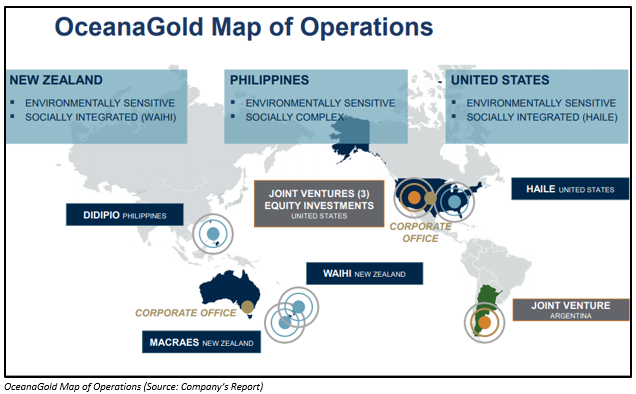 Recent Update/s: On 27 June 2019, OceanaGold Corporation announced that reports stating that the company has halted operation are false. The company confirmed that the Didipio Mine is under operation.

Further, in the month of March 2018, the company had filed its request with the Philippine Government to renew its Financial or Technical Assistance Contract. On 20 June 2019, the company received confirmation from the Mines and Geosciences Bureau (“MGB”) that Didipio operation is allowed to continue with its operation after the renewal of the Financial or Technical Assistance Agreement by the Philippine Government. The company will operate as per the rule and would also obey with its duties as per its agreement with the Philippine government.

The Didipio mine has delivered substantial socio-economic benefits to the Barangay of Didipio, adjacent communities, the Philippines as well as provinces of Nueva Vizcaya and Quirino. It generates service for 1,500 workers. Out of these 1,500 workers, 95% belongs to Philippine which includes more than 50% from the local communities along with thousands of additional livelihood opportunities/indirect jobs via partnerships with cooperatives as well as social development organizations.

In the recent AGM which was held on 14 June 2019, the company provided its 2018 highlights. The company made a record annual revenue. Around $121 million in free cash flow was generated. It achieved production & cost guidance for the 7th successive year. Its net debt declined by 59%.

On the other hand, cash balance increased by 47% on a yearly basis. The company was recognized as the third best performing gold producer. The company reported solid exploration results, especially at WAIHI and WKP.

Balance Sheet Overview as at 31/03/2019: The company had total liquidity of $137 million. Comprising of $50 million of undrawn credit facility, and available cash was $87 million. The net debt for the period was $99 million.

About the company: Resolute Mining Limited (ASX: RSG) is a successful dividend-paying gold miner which has above thirty years of experience as an explorer, developer, and operator of gold mines situated in Australia and Africa which has produced above 8Moz of gold. The company is the owner of three gold mines, namely Syama Gold Mine in Mali, Bibiani Gold Mine in Ghana and Ravenswood Gold Mine in Australia. Syama gold mines produces above 300,000oz of gold yearly from prevailing processing infrastructure. It's Ravenswood gold mine is a consistent performer and is an integral part of the business of the company for more than 10 years.

Recent Update/s: On 27 June 2019, the company announced that its Syama Underground Mine was able to achieve commercial rates of ore production since mining and hauling above 80 per cent of nameplate capacity.

Further, the Syama Underground Mine would be the first fully automatic underground gold mine in the world which will produce 46k tonnes of ore in a week when it is in full capacity. Using its fully integrated automated mine fleet, the company would be able to produce 2.4 million tonnes of ore annually. All the important aspects of the mine are now functional, and the daily ore haulage rates are frequently more than 5k tonnes in a single day.

In June 2019 quarter, there was significant progress seen in the growth rates, drill and blast performance as well as the availability of sublevel cave drawpoint. The blasted ore tonnage increased significantly which was mined for June 2019 quarter. Based on the present performance, ore hauled to the run-of-mine pad during the June 2019 quarter would be ~ 320,000 tonnes which are more than double the hauled tonnes in the March 2019 quarter. The improvement in the haulage was the outcome of the development of extra production slots which led to the number of active stoping areas to grow from 6 to 12 during the period of the prevailing quarter.

The underground pumping systems of the company at present is installed entirely and is functional. The Syama Underground Automation System’s commissioning is under progress. The operators in the surface control room could control the underground production units over blasting, shift-change and periods of re-entry, in the absence of staffs in the underground mine. Apart from this, the fibre optic backbone and mine-wide wireless network is also finalized from the portal down to the 1055 haulage level and is linked to the surface control room. Thus, the network helps the operators to have a check as well as control the production of mine in real time.

Recently, the company released its London Stock Exchange Listing presentation on 20 June 2019. In the main market of the LSE, the company trades under the ticker code RSG. The shares of the company can be transferred fully between ASX and LSE. The listing of the company on LSE would enhance the profile of the company in international markets. 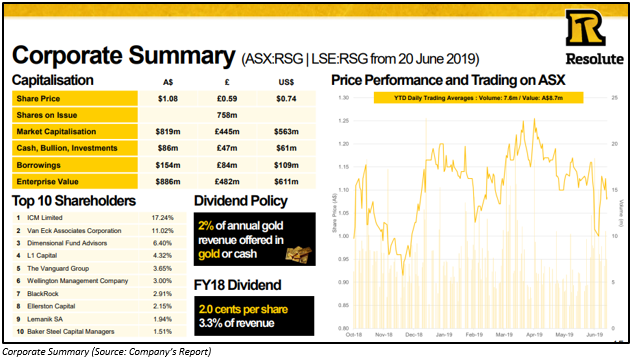 The presentation also highlighted that the company is committed to working safely at each point of time and also to improve the way of working. It is accountable to the people with whom it works, the quality of work as per business expectation. The company is responsible for the families of its employees, the way employees treat each other and at the same time learning from the mistakes. The company also allows its employees to speak up and also share ideas. The employees can stop anything if they find it as unsafe.