Is KTA next to fire with Copper & Gold in the Lachlan Fold? Shallow Gold intercepts discovered

Junior gold explorer, with projects located in the Lachlan fold belt-the hottest gold exploration address in Australia, Krakatoa Resources Limited (ASX:KTA) has just announced significant results gleaned from historic drilling nearly 30 years ago across the north extension of the Quartz Ridge Mine. The Quartz Ridge mine is placed within the Krakatoa’s fully-owned Turon Project, located near Bathurst, New South Wales. Turon was acquired via non-dilutive application in November 2019.

Micro-Cap Krakatoa Stock was up a massive 25% on ASX post the announcement.

Although production figures from Quartz Reef are scarce, historical high grade production from past operations were sizeable enough to support a town with three hotels, racetrack, store, post office and school.

Whilst the drilling results came from the old mine to the north, the southern extent of the known strike reports spectacular rock chip grades. See Figure 1 below in green shaded labels. 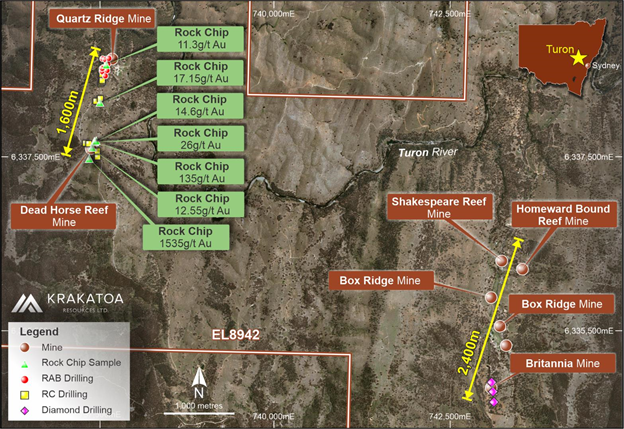 Past explorers reported numerous significant gold grades from chip and mullock sampling, including 1,535g/t, 135g/t, 26g/t, 14.6g/t, 12.55g/t and 11.3 g/t Au, distributed along the length of the gold workings. The outstanding chip result of 1,535g/t gold lies south of Dead Horse Reef and remains untested by drilling. Confidence in the open strike length is strengthened by a peak value of 11.3g/t gold from a chip sample north of the Quartz Ridge Mine, near the currently described RAB drilling. 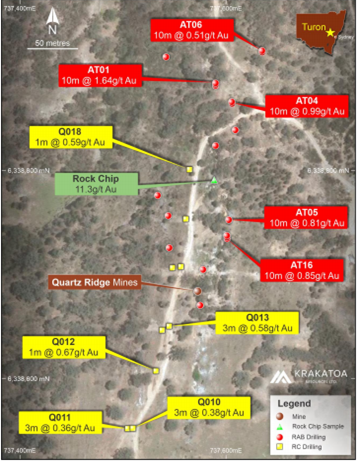 Quartz Ridge represents an exciting shallow exploitable opportunity for the Company where multiple walk- up drill targets with significant gold tenor are identified.

The shallow RAB program identified a number of highly anomalous gold intercepts with results up to 10m @ 1.64g/t gold from the surface to end of the hole, which remain untested. Further, encouraging assay results unearthed for 18 shallow RAB holes drilled north of the historical Quartz Ridge Mine include the following:

Way Ahead for KTA

Moving forward, KTA will determine the number and locations of multiple walk-up drill targets, realise the size  and tenor of any tailings, survey, sample and map accessible underground workings and organise a RC or diamond drilling program to test rock chip and drill results to the:

The Belgravia Project covers an area of 80km2 and is located in the central part of the Molong Volcanic Belt (MVB), East Lachlan province, between Newcrest Mining's Cadia Operations and Alkane Resources Boda Discovery. The Project has six initial target areas considered highly prospective for porphyry Cu-Au and associated skarn Cu-Au, with  Bell Valley and Sugarloaf representing the two most advanced target areas.

The Turon Project covers 120km2 and is located within the Lachlan Fold Belt's Hill End Trough, a north-trending elongated pull-apart basin containing sedimentary and volcanic rocks of Silurian and Devonian age. The Project contains two separate north-trending reef systems, the Quartz Ridge and Box Ridge, comprising shafts, adits and drifts that strike over 1.6km and 2.4km respectively. Both reef systems have demonstrated high grade gold anomalism (up to 1,530g/t Au in rock chips) and shallow gold targets (up to 10m @ 1.64g/t Au from surface to end of hole) that present walk up drill targets.