In a significant development, Australian-headquartered mining and exploration firm, Kingwest Resources Limited (ASX:KWR) has recently announced an updated MRE (Mineral Resource Estimate) for the Pericles Prospect at its Menzies Gold Project or MGP.

The Company has reported the new estimate as 0.78 [email protected] g/t Au (Inferred Resource) and 0.63 Mt @ 1.8 g/t Au (Indicated Resource) for a combined total of 1.4Mt at 1.8 g/t Au (79.5K ounces of gold). This indicates a significant increase of about 87 per cent in contained Au metal over its prior estimate reported in March 2016. 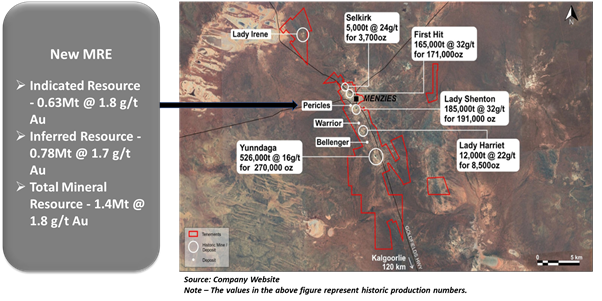 The new February 2020 estimate for Pericles (across the globe) contains considerably higher tonnages and contained gold ounces at lower grades than the previous February 2016 estimate.

The difference between 2016 and 2020 estimate can be attributed to differences in classification, additional drilling and domaining and differences in bulk density values used.

The Company underlined that Pericles is not the only JORC resource in the MGP, while numerous other deposits have the potential for resource estimates to be calculated. The total near surface resources at Menzies now is 3.29 Mt at 2.0 g/t Au for 208,300 ounces. 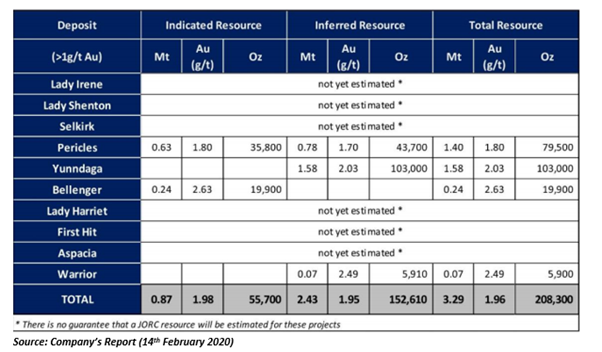 Pericles is the first of numerous deposits to be reviewed as potential near term open pit exploitable resources by Kingwest, and the Company is in the process of reviewing the existing and potential resources at MGP.

The Company notified that the new MRE has been reported and prepared in line with JORC Code (2012) and is based on the latest drilling conducted by Kingwest in 2019, along with remodelling and re-evaluation of the deposit.

A consultant to Kingwest Resources, Don Maclean completed the new geological interpretation and resource estimate. Moreover, the MRE depends on the geological assay data from 5 diamond core and 182 RC drill holes finalised up to December end 2019.

The Company added that the RC drilling was finalised by previous project operators, while it drilled five diamond holes, which were RC pre-collared and then diamond tailed using NQ core. The geological modelling utilised Leapfrog Geo 3D software, developing a 3D geological model, which was used to guide the mineralisation interpretations.

The Company highlighted that gold was the only element estimated due to its economic significance as the primary metal. For preparing the resource estimate, it was assumed that mining and processing can be economically undertaken using conventional CIL/CIP processing and open pit mining methods.

As no metallurgical test work is available for Pericles, it is the geological continuation of the Lady Shenton open pit, located 200m to the south, which was successfully processed and mined in the late 1990s using conventional CIL/CIP.

Below table demonstrates February 2020 Resource Estimate, reported at an 0.5 g/t and 1.0 g/t Au cut-off grades which are expected mining cut-off grades reliant on the scale/style of open pit mining extraction.

Kingwest has planned to conduct economic studies and pit optimisation of Pericles in the first half of 2020 to gauge the potential for open pit mining. Its core focus is on drilling of and proving up high-quality gold mineralisation fit for potential underground mining. 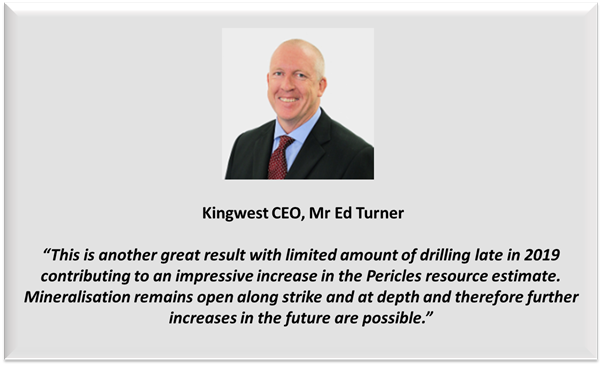 This website is a service of Kalkine Media Pty. Ltd. A.C.N. 629 651 672. The website has been prepared for inforkwrmational purposes only and is not intended to be used as a complete source of information on any particular company. The above article is sponsored but NOT a solicitation or recommendation to buy, sell or hold the stock of the company (or companies) under discussion. We are neither licensed nor qualified to provide investment advice through this platform.