RBA Chief Phillip Lowe has expressed dissent with regards to the policy and maintains the view that it is “extraordinarily unlikely” that such an action would be taken by RBA. However, Bank of England’s newly evolved interest in the negative interest rate policy has added fuel to the existing speculations about RBA implementing it. 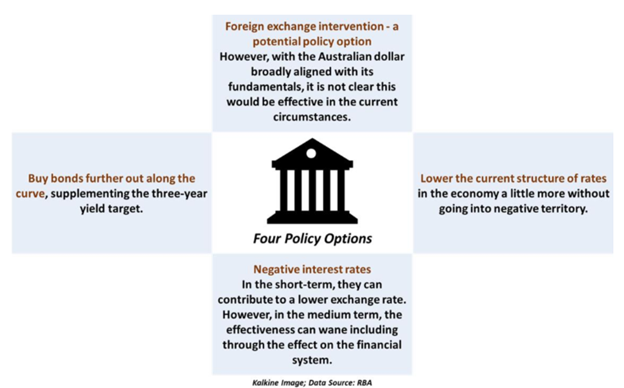 If it were to be adopted in Australia, a negative interest rate would likely be implemented on the retail banks’ borrowings from the Central Bank. Further, it is upon commercial banks to decide whether to pass it on to the public. For a country like Australia, that has not seen negative interest rates in the last two decades, this has to be a huge step.

Many in favour of the policy carry the argument that low interest rates can revive the economy and can be the only way out in these uncertain times. Low interest rates would mean less foreign investments and hence less demand for the Australian Dollar which would cause it to depreciate, thereby making the products competitively attractive in exports market.

On the domestic front, low interest rates would inspire borrowings which could potentially stimulate investments and kick-start the economy.

While opponents of lower/negative interest rate argue negative impact on savings. These expectations exist in theory. Infact, there is a possibility that many people, fearing a decline in their savings deposits, would start saving more and consuming less. While, we also cannot deny that this could mean a contraction of the economy, which would conflict with the initial goal of expansion. This spiral may or may not occur depending on people’s expectations.

Adding to that, banks might prospect a loss of confidence in them by the people and would face direct costs. It is plausible that it is better to steer clear of the policy unless it is the only way out. The expectations may not always collide with the reality and the economy might face a rough patch.

RELATED READ: How did the economy get affected by the pandemic?

What Have Previous Experiences Taught Us?

Countries like Japan, Switzerland and Denmark have maintained negative interest rates for almost half a decade and continue to do so. Sweden and Spain continue to maintain a 0% interest rate and have being doing so since pre-pandemic days. These examples further push the argument in favour of the policy.

On closer inspection, one can see that the implementation of negative interest rates was an act of desperation. Looking at the example of Switzerland, the lifting of minimum Swiss Franc Exchange Rate roused the need for a negative interest rate. But the trade-off was observed in the financial sector.

Banks faced the brunt of this move by the SNB and had to bear the costs. Certain banks were exempted from the policy and thus the entire burden fell on a few banks, which heightened the adversity in the banking sector.

The short-term goals of putting a downward pressure on the currency can be achieved with interest rates that are low or close to 0%, or in some cases, even 0%. Over a long period of time, the costs attached to a negative interest rate may outweigh the benefits that it carries. (Source: Swissbanking.org)

To date, those economies with negative policy rates have not lowered them further. Instead, they have eased monetary policy settings through other means.

Australia is currently experiencing an unemployment rate of 6.8% and it is expected to reach an all-time high level of 10% by December 2020.

Politician and economist Andrew Leigh expects the negative interest rates would pan out a better scenario in the job market much to the disappointment of Phillip Lowe, who denied these claims. The former is of the view that the negative interest rate policy would have no effect on the job opportunities in Australia. It would neither benefit nor harm the unemployment rate in Australia.

Lockdown restrictions have affected economies worldwide and the Australian economy is no exception. With easing of these restrictions around July, economic growth has gained momentum. According to the RBA monetary policy minutes, consumption has improved albeit it continues to remain lower than what it was before the pandemic. The unemployment rate has come down faster than expected.

If the RBA continues down its path to lowering the interest rate, exchange rate stabilisation and temporary momentum might be achieved. However, prolonged exposure of the economy to such low interest can come with its own set of challenges which the RBA would have to overcome. Considering the situation of a pandemic as well as Australia’s recovery from the bush fires, it can seem like a daunting task.

ALSO READ: All that you need to know about RBA's toolkit