The VicGold Project is in the southern extent of the Lachlan Fold Belt of Victoria’s East Gippsland region. The project includes the Haunted Stream application area (EL 006816) that holds the potential for large scale high tenor gold mineralisation, as indicated by the historic workings and the rock chip sampling over the 8 kilometres of the strike. The historic mining records dates back to 1880s, with extracted ore holding gold grade in excess of 31 grams a tonne (1-ounce Au per tonne). Exhibition Mine, a historic gold mining operation reported mining ores with a grade of >150 grams a tonne (5 ounces per tonne), an extremely high value against the global gold mining average.

Large project area and the historical indications of extremely high-grade gold ores maximises the potential to host the next big gold system discovery. The flagship Haunted Stream tenement has been exposed to minimal or no drilling to test the extent of mineralisation at depths. Additionally, untested or underexplored prospective saddle reef and mafic intrusive dykes possess immense exploration opportunities. 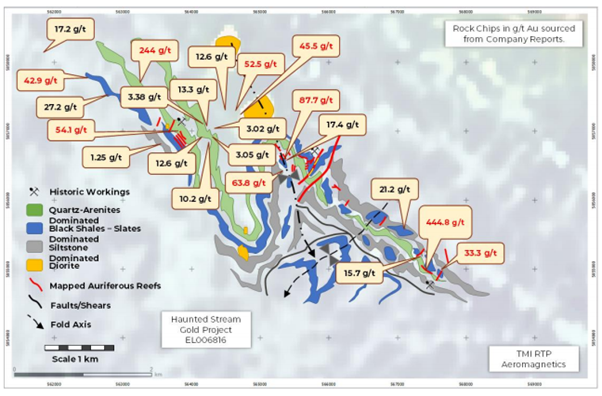 The Victoria Goldfields project is located on the southern Lachlan Fold Belt, a mineralisation region known for the Au-Cu porphyry deposits. Historical exploration depended on the geophysical characteristics with limited understanding of the mineralisation structure. VicGold identified prospective tenures using the Geological Survey of Victoria (GSV) studies on subsurface geology.

VicGold conducted a preliminary data compilation and its insights on the high-grade gold mineralisation in the region. The Rock chip samples by Mantle mining in 2007 revealed assay results of gold grades up to 444 g/t (~15 ounces of Gold per tonne). The high-grade rock chip assay results in combination with the new VicGold’s geological mapping and interpretation indicates consistent trends on mineralisation, a new insight which helps establish the prospectivity of bulk mineralisation at the project. First Au plans to initially focus on these targets, some of which are drill ready.

The Exploration License Application EL006977 contains the Dogwood Cu-Mo-Au Prospect, which was historically explored by Anglo-American prospecting (1978-83) and CRA Exploration, now a part of Rio Tinto Group (1988-1994). Historical exploration suggests the presence of an oxide blanked on top of the fresh sulphide copper mineralisation as suggested during the RC and diamond drilling programs. Other tenements hold a substantial historic hard rock and alluvial gold workings. The prospects share the structural corridor with the Haunted Stream, which is located northwest of Dogwood. The historic exploration data is currently being compiled and processed.

A Shot in the Arm for the Geological Team

Mr Ian Neilson, a renowned geologist, would join the exploration team of First Au. Mr Nielson is an experienced geological consultant and also a major shareholder of VicGold. Prior to his association with VicGold, he served as the principal structural geologist for Newmont Asia Pacific and Mineral and Metals Group. He holds extensive exposure to the gold deposits in the Yilgarn Craton, where First Au advances on its Gimlet Gold project in the vicinity of Kalgoorlie Goldfields.

On completion of the acquisition, Dr Gavin England would take over as the Technical Director on the board. Dr England is an experienced geological consultant and currently serves as the exploration manager for First Au. The appointment is contingent on the transaction completion. He has been involved extensively with the First Au’s Gimlet Gold project.

To know more about the Management and Technical Team at First Au, Read Here

The agreement anticipates an acquisition of 80% stake in Victorian Goldfields Pty Ltd by First Au.

The terms of payment for the acquisition are as follows-

The transaction is contingent on several conditions which include granting of flagship Haunted Stream exploration licence application (EL 006816), new fundraisings of over $1 million by First Au and satisfactory completion of due diligence investigations.