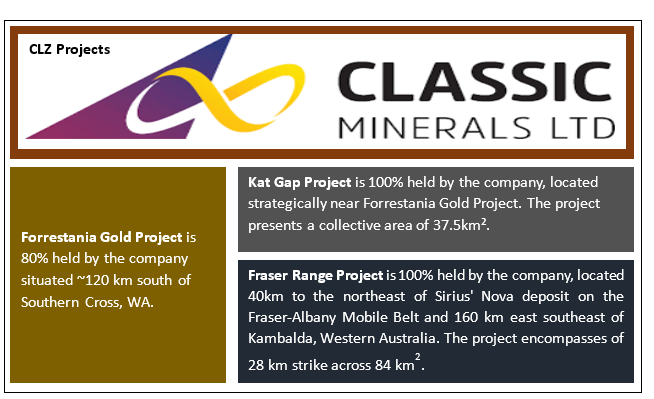 The Kat Gap Project: The project is tactically located ~70km south-southeast of the Company's Forrestania Gold project comprising the Lady Magdalene and Lady Ada gold resources. The project poses significant gold mineralisation zones across granite-greenstone contact, and it is down-dip as well as possibly down-plunge at depth besides along strike on the southern side of the Proterozoic dyke.

A total of 16 RC holes for 1,653m at the project has been drilled by Classic Minerals, and attractively most of the holes delivered gold mineralisation striking in a northwest-southeast direction. The result remains the same when extended the drilling down dip on the south side of the Proterozoic dyke and presents open mineralisation in all directions.

CLZ aptly uses strategy to drill RC holes relatively close together, covering around 80m of strike instead of drilling expensive diamond holes to reap a better understanding of the plunge direction to the high-grade mineralisation. Where the findings revealed a possible flat shallow dipping shoot structure managed by the roll or flattening of the granite-greenstone contact.

Granite-greenstone contact lode on the south side of the cross-cutting Proterozoic dyke:

In the early stage of exploration, the Company has made shallow RC holes over the area which has demonstrated the better result at the north side, resulting in the decision to concentrate the drilling activity there. After several cycles of drilling and improved assay result of high-grade gold mineralisation on the north side, consequently, a decision was made to assess the south side of the dyke.

For the same, 6 RC holes for a total of 320m were drilled and has displayed an improved result, also discovered slight off-set in the granite-greenstone zone contact by around 20- 25m to the west.

Is the drilling result being better than the previous drilling?

The majority of the previous drilling was relatively shallow, i.e. ~ 60m vertical depth below the surface with a strike length of the granite-greenstone contact of approximately 400m. The critical zone of drilling has been focused mostly nearby to both cross-cutting Proterozoic dyke and granite-greenstone contact. In line with the same, a total of 127 holes for 9,391m was completed during May 2018 and November 2019, returning significant enriched high-grade gold intercepts. 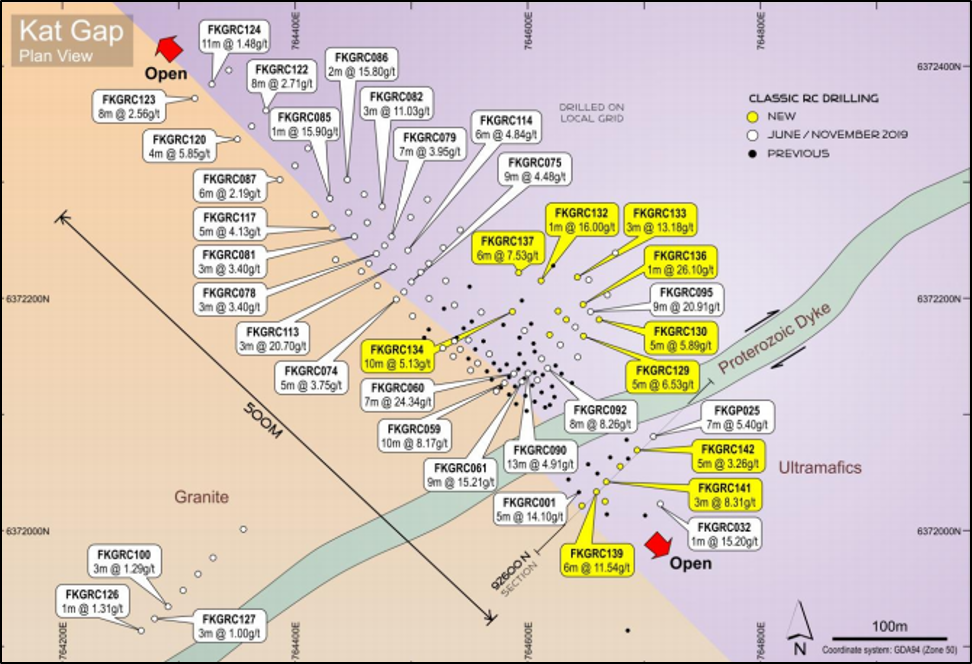 The Kat Gap nearby deposit, i.e. Lady Magdalene and Lady Ada gold resources are part of Forrestania Gold project. The Forrestania Gold has exhibited both the technical and economic viability of the project with a recent scoping study. The mineral resources are evaluated from these two deposits in accordance to 2012 JORC Code is 7.27 Mt at 1.33 g/t for 311,050 ounces of gold.

Also, it is worth mentioning that previous drilling at a distance of ~ 100m – 200m line spacings pose the strong potential for additional mineralisation identified near existing historical RC drill coverage.

Further, follow up on RC holes with the drilling plan, is expected to schedule on early February by Classic Minerals.