Based in Landsdale in Australia, Classic Minerals Limited (ASX: CLZ) is a metals & mining sector play, with focus on gold exploration and development in the Goldfields region. The company holds tenements covering a total area of 178 square kilometres across three major exploration regions in Western Australia, with the areas identified to hold high grade gold, copper, nickel, cobalt, manganese, and base metal targets.

On 4 September 2019, CLZ updated the market with assays results received from the latest reverse circulation (RC) drilling program at the company’s flagship project, Forrestania Gold Project (FGP) in Western Australia. As of now, under the program, the company has drilled a total of 17 holes to a depth of 1,880 metres at the Kat Gap project, which is strategically located ~ 70 kilometres south-south east of FGP. The 17-hole drilling was targeted to enhance/boost known high-grade gold mineralisation. 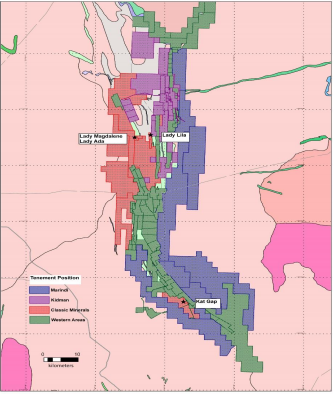 Of the total 17 holes, 12 holes (from FKGRC090 to FKGRC098 and FKGRC104 to FKGRC106) were drilled along the granite-greenstone contact, owing to which the down-dip projection, adjacent to the Proterozoic dyke, extended to more than 100 metres vertical below the surface with mineralisation open in all directions.

The 12 holes (drilled to a total depth of 1,360 metres) were drilled in order to test the up-dip and down-dip estimations of the primary granite-greenstone contact lode in the vicinity of the cross-cutting Proterozoic dyke and the down-dip extent of the northern extension zone. The current round of reserve circulation drilling was majorly aimed at testing the down-dip extent of earlier intercepts of high grade where the contact flattened. Moreover, the program was designed to perform testing on the down-dip estimates of recent high-grade intercepts in the newly extended northern zone.

The company reported the following better results from these 12 holes:

The remaining five holes from FKGRC099 to FKGRC103 were drilled out into the granite 300-400 metres west of the current drilling area. These holes intersected broad anomalous gold mineralisation zones, which have a maximum thickness of 20 metres. The mineralisation was located within the granite grading from 0.1-0.5 grams per tonne associated with zones of minor quartz veining, biotite and albite alteration.

Of these five holes, best result was achieved from the hole - FKGRC100, as it intersected 3 metres at the rate of 1.29 gram per tonne from 96 metres close to the bottom of the hole. The company is required to carry out further drilling activities to identify the source of the auger anomaly, as the widths and gold grades returned from these first few holes were unable to provide explanation on the size and magnitude of the auger soil anomaly. 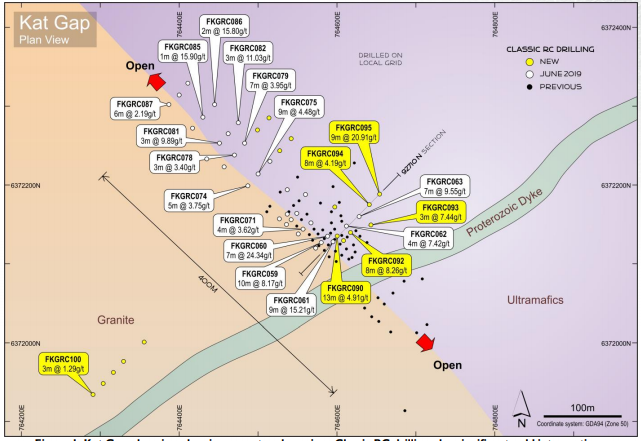 The company referred to the drilling results as encouraging, owing to considerable gold mineralisation zones located on the granite-greenstone contact, that are expected to boost any future open pit mining operation. Based on the results, high-grade gold mineralisation projects were found to be located in proximity to surface and continued to down-dip with increasing width. Meanwhile, CLZ CEO Dean Goodwin stated that the results were encouraging for the company, with plenty of anomalous gold below the oxide profile.

During the future drilling programs at its wholly owned Kat Gap project, Classic Minerals plans to focus on testing the main granite – greenstone contact further north and south along strike from the current drilling area, aimed at testing the northerly and southerly extensions for another 200-300 metres along strike. If successful, the testing would deliver 1,000 metres in total strike length. Additionally, through the reserve circulation drilling, the company intends to probe at depth down dip along the entire 400 metres of gold mineralised granite-greenstone contact that it has delineated as of now.

Moreover, aircore and RC drilling programs would be conducted out into the granite for testing the large 4.4 kilometres long geochemical anomaly that the company had identified in the historical auger soil sampling.

The company has planned to undertake follow up reverse circulation and few deep diamond holes to collate valuable structural data. It plans to start drilling during the mid of October 2019.

Classic Minerals Limited has a market cap of AUD 8.71 million and approximately 4.35 billion outstanding shares. On 4 September 2019, the stock traded flat at a price of AUD 0.002.