Would The Australian Lithium Industry Survive The Battery Technology Wave?

Lithium and the lithium-based chemicals are capturing the investorâs attention amid battery technology development across the globe. The industry experts anticipate greater penetration for EV sales over the coming years, as the price of EV powertrain becomes as affordable as the price of an internal combustion engine.

Lithium accounts for over 40 per cent of an electric vehicle price amid its usage in the battery for energy storage. The higher cost of EV powertrain is now branching the lithium industry into a new segment- âThe Battery Technologyâ.

In the status quo, the central NDA government in India had pushed for polymer-based solid-state batteries; While Japan is consistently promoting its hydrogen-based hybrid cell technology. The graphene-based batteries which address the lithium-based batteries heating and other issue are also into R&D.

Despite such developments, the lithium industry is making rapid progress, the lithium explorer and downstream processors are securing more and more offtakes for their respective prospects over time or are highly engaged in the development of lithium-based projects.

Australia seems to be in a position to keep other lithium suppliers at bay and dominate the lithium supply chain despite measures adopted by the Chilean government to increase the domestic production. The rabbit-paced development across the Australian minersâ tenement lay the fundamental pathway for Australia to keep on walking for the dominancy in the lithium space.

The advancement across the tenements of ASX-listed lithium players such as Piedmont Lithium Limited, Galaxy Resources, Infinity Lithium, Orocobre Limited, etc., plays a pivotal role, as the development and production capabilities enhancement of such miners would allow Australia to top the lithium supplier rank.

PLL or formerly WCP Resources is an Australian Securities Exchange-listed lithium explorer and producer which is focused on developing the Piedmont Lithium Project, North Carolina. The project is within the Carolina Tin-Spodumene Belt (or TSB) in the United States. The project has compelling economics amid attractive capital and operating cost along with long mine life and significant by-product credits.

PLL recently updated the scoping study and reported the results, in which the company mentioned that the expanded Mineral Resource at the project extends the overall project life to 25 years.

The scoping study suggests a steady-state 22,700 tonnes per annum of lithium hydroxide chemical plant at the prospect, which is supported by the feedstock of 160,000 tonnes per year- 6 per cent graded lithium oxide spodumene concentrate from a mine/concentrator.

The average cash cost between the smallest cash cost and the median cash cost (or 1st quartile cash cost) for the lithium hydroxide production stands at US$3,105 per tonne, and for spodumene concentrate stands at US$199 per tonne.

PLL suggests that over the life-of-mine, the average all-in sustaining cost (or AISC) for the project would stand at approx. US$3,565 per tonne (indicated by the cost curve), which would include the royalties and by-product credits, which as per the company would make it the lowest-cost producer in the industry. 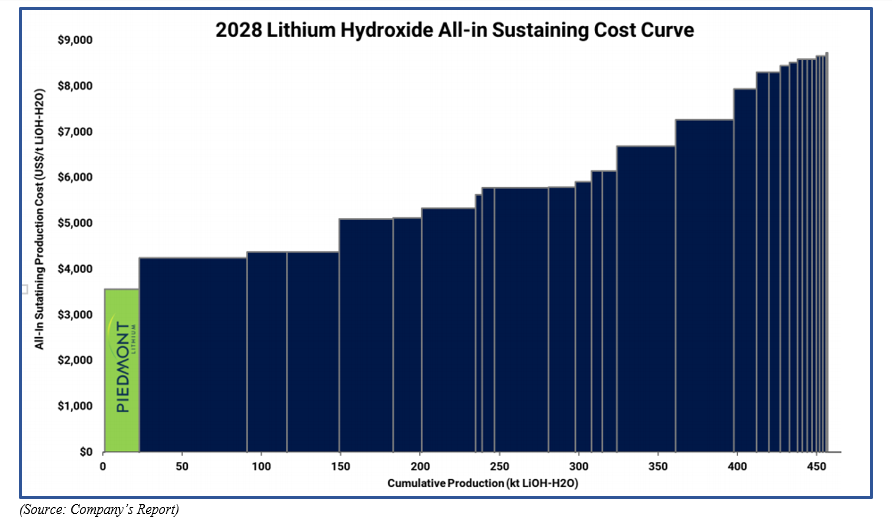 The testwork, which achieved all the milestones for the PFS test work programme, was conducted and completed by the Wave International. The PFS testwork now supports the assumptions of the scoping study conducted by the company previously.

The critical assumptions of the scoping study included the successful re-use of the potassium sulphate in the roasting and water leach process.

INF successfully completed the $1.5 million placement to advance its flagship San JosÃ© Lithium Project along with the advancement of Stage 1 and 2 of the lithium hydroxide plant testwork program during the June 2019 quarter.

The company secured the supply of key reagents by entering into a Memorandum of Understanding (MoU) with Ercros- a Spanish group.

GXY is an Australian Securities Exchange-listed lithium explorer and lithium-based downstream processor. The company holds the Mt Cattlin prospect, which is among Australiaâs top lithium assets, and the Australian government departments anticipate the spodumene production from the prospect to witness a rapid increase over the years ahead.

The company announced today on ASX that the company is undertaking a review of its inventory on hand at the Mount Cattlin prospect as a part of its preparation of the half-yearly financial statement for the period ended 30 June 2019.

GXY also mentioned that the company is currently reviewing the capitalised Mt Cattlin mine development costs, and the deferred tax assets arising from capitalised tax losses.

Upon considering the currently available information, GXY mentioned that the company expects a non-cash impairment for the half-year ended 30 June 2019.

As per the company, the non-cash impairment could be in the range of US$150-185 million, and once estimated it would be included in the half-year financial statement of the company, which is scheduled to release later this month.

In a nutshell, the Australian miners are making progress over their respective tenements, which in turn, could keep Australia at the number spot in the lithium supply chain.

However, staying at the number one spot would help in boosting the export revenue of the nation, but that makes Australia dependable on the value-added products of lithium such as lithium-based chemicals and manufactured batteries.