Will Augmented Reality Bolster in 2020?

Augmented reality (AR) has been dominated by virtual reality (VR), a similar technology, for years. But now the dice has turned with AR creating a name for itself in areas such as e-commerce, education and engineering.

AR is witnessing quick implementation on the back of a shift in consumer likings and business requirements. Practically every key sector including healthcare, consumer, retail, entertainment, gaming, construction and tourism, are utilising the technology to interrelate between the real world and 3D virtual objects in real-time basis.

Furthermore, AR is gaining increased popularity for its widespread use in all industries, whereas VR is mostly restricted to the entertainment and gaming industry. AR gives us a real-life experience by merely connecting the real and virtual worlds. Just imagine getting a piece of furniture home and examining if it fits even without placing the product to your cart. 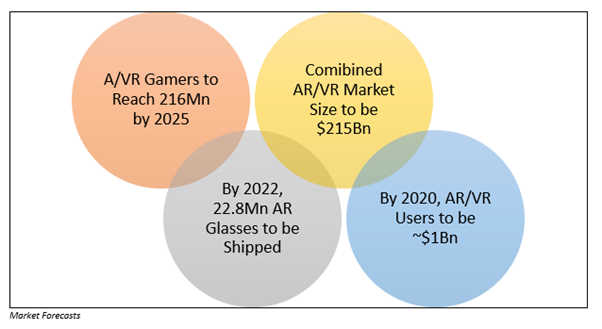 A Short Talk About Augmented Reality

Whenever AR is discussed, the first thing that strikes our mind is a technology that contains information and virtual objects in real-world on a real-time basis. This technology utilises current situation and includes data and information to it to make a new artificial world. Many organisations are launching augmented reality apps, and this has made the promising technology available to many products and a broad audience.

Possibly the best example of AR technology is the Pokémon Go mobile app. It has become increasingly popular and a hit, with players attempting to place and catch Pokémon characters that pop up in the real world.

Organisations are making continuous efforts to promptly enter the flourishing AR market. As per media sources, the worldwide market for AR/VR is estimated to achieve US$814.7 billion by 2025 at a CAGR of 63.01% over a period of six years (2019-2025).

Rising proliferation of AR-based applications worldwide is prompting tech giants to invest in the space. Per media report, AR technology user base is expected to exceed one billion by 2020.

Also, Microsoft, Google, and Snapchat-parent Snap are profiting from the increasing need for AR-based hardware devices such as AR glasses. Notably, the AR glasses shipment is predicted to reach 22.8 million units by 2020.

Per data from media sources, AR-based hardware, commerce, communications and commercial/enterprise applications are expected increase 68%, 78%, 66% and 43%, respectively, in the period from 2020 to 2025.

So, if you are interested in tapping this growing AR popularity, here are your best bets:

Alphabet Inc.’s (NASDAQ:GOOGL) release of an enhanced version of Google Glass known as Google Glass Enterprise Edition 2 is remarkable. Markedly, the glass, which is mainly constructed for enterprises, runs on Android and is equipped with enhanced camera performance for first-person video streaming and teamwork. The newest Google Glass is efficient in helping businesses in enhancing work productivity by letting them offer employees with hands-free access to visual data and information.

Apart from the augmented reality glass, the search behemoth is analysing five AR impacts within the camera of its messaging app. Additionally, Google is attempting to boost search results with new AR characteristics which facilitate customers to view and interact with 3D objects right from Search and place them immediately into their own space.

Microsoft Corporation (NASDAQ:MSFT) is also securing its place in the market with the growing portfolio of AR glasses which includes HoloLens and HoloLens 2.

Markedly, Microsoft’s HoloLens 2, which is built on mixed reality (MR), was introduced at the beginning of 2019 with a unique emphasis on enterprise use. The company is winning clientele on the heels of both the AR glasses. Of late, Airbus implemented the HoloLens devices and is doing work with Microsoft to create HoloLens 2 products.

Facebook, Inc. (NASDAQ:FB) is also gaining from its AR programs on Messenger and Instagram applications. The effects of AR camera on Messenger facilitates brands to increase traction across clients by empowering them to “try on” merchandise and check on the latest and innovative products.

Apple Inc. (NASDAQ:AAPL) is also not far behind and is leaving no stone unturned to gain advantages from the potential AR market. The company designs, modify, manufactures and markets personal computers, smartphones, wearables, tablets, and accessories on a global basis. Apple is gearing up for the forthcoming AR dominance. The company had launched a set of AR tools consist of ARKit 3, Reality Composer and RealityKit.

The company had unveiled AR software enhancement tools called ARKit in 2017 and supported it up with ARKit 2.0 in 2019. Such tools assist start-ups to build AR-based applications. And it won’t be a surprise if the company comes up with its AR product.

The iPhone maker persists in profiting from the impetus in its non-iPhone businesses, particularly strong implementation of Apple Pay and a growing Apple Music subscriber base.