Will Afterpay crack the list of top 10 stocks on ASX?

There has been a fast-tracked shift towards online shopping particularly amongst millennials after coronavirus shutdowns were implemented and the firm has benefitted a lot from the shift in consumer spending behaviour.

Afterpay is currently on fire after passing through a significant downfall in March due to the onset of a pandemic. However, some risks loom around its viability in near-term.

The fintech giant is now valued at $11.3 billion, with its shares up by staggering 375% from the bottom as markets become optimistic on COVID-19 and economies start to reopen.

APT’s share price bottomed out at $8.9 on March 23 as social distancing measures were implemented with shutting down of all businesses and panic amongst investors due to coronavirus. However, since then, the stock price has been on a climbing ladder. The Group came out with strong growth in its April business update with a declaration of March being its third largest underlying sales month on record. 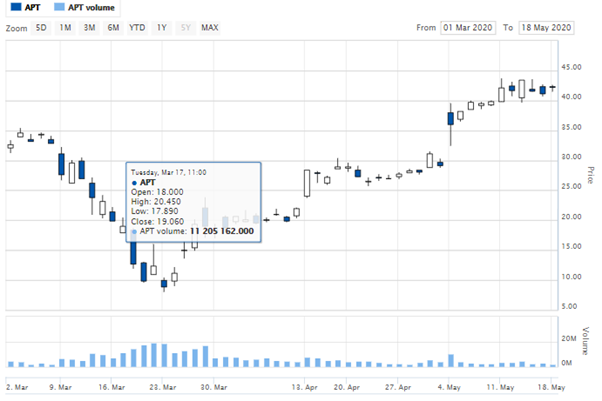 Afterpay broke new highs reaching to $43.68 on May 11. The rise came after Suncorp’s Chief executive Lee Hatton, former chief of NAB’s digital offshoot UBank, will leave after 3 months to take up a role with APT. Afterpay closed the market session at $42.35 on May 18, up by 0.095% from its previous close.

APT has aligned its business model with low-risk profile shoppers and responsible spending amid coronavirus. The firm has taken strict measures to protect its business such as tight spending limits, the introduction of payment of first instalment upfront for Australian customers and tightening of transaction approval parameters and spending limits on high-risk products.

On April 3, Afterpay entered into a new partnership with eBay offering APT access to 40,000 small and medium businesses of Australia and their customers. Some of the other vital merchants who went live or contracted during the march quarter 2020 in Australia included Samsung, Lancome AU, YSL Beauty, Kiehius, Kookai and more.

On May 1, Tencent Holdings Limited, a Chinese technology firm and WeChat owner, entered into a strategic partnership with APT and paid $300 million to buy a 5% equity stake in the BNPL player. APT founders stated that partnership and expansion opportunities have been on the agenda but asserted that their focus remains on the current business at present.

Afterpay’s expansion plans in Canada is progressing well. Though the firm has planned to target its entry in 2020, the timing is not yet confirmed. APT is also preparing to launch in-store in the US with the timing of launch contingent on the duration of recovery in offline retail in the US.

The BNPL player plans to surpass its mid - term underlying sales mark of about $20 billion in the Financial Year 2022. The firm had previously aimed to reach a customer base of 9.5 million by 30 June 2020. However, given expected moderations in new customer growth due to COVID-19 with the implementation of additional risk measures, the guidance was withdrawn.

APT has strong liquidity and robust balance sheet due to capital management initiatives implemented pre-COVID-19 with no requirement of capital raising as such. The firm has also been focussing on reducing fixed cost expenditure to protect itself from ay fall in its underlying sales and to moderate the potential cash burn that may arise amid coronavirus.

Afterpay still carries the risk of slow sales growth. According to a few research firms in the US, consumers have reduced grocery spending now after panic buying. Changes in spending behaviour there is bound to affect APT sales as it was BNPL growth in the US that excited APT investors. Consumer patterns can also very well change once all assistance and government measures are lifted. ABS has also reported a relatively steady wage growth at 0.5%prior to worst coronavirus levels.

Another key threat is regulation. The Australian Securities and Investment Commission (ASIC) has been assessing the growth of BNPL sector. ASIC accused the industry alleging that 1 in 6 providers bothers to check credit history and income of the consumers before offering them credit.

ASIC has informed that about 44% of people who use BNPL services earn lower than $40,000 annually while about 40% of users are students or are the chunk of the part-time workforce.

Subsequently, major BNPL players life Afterpay, Zip Co, Latitude, Flexipay, etc will follow a draft code of practice, written by Australian Financial Industry Association (AFIA) that covers measures to protect financially vulnerable entities from falling into debt and repulse any hard procedures from the regulator. Afterpay asserted that regulatory intervention is not in the public interest and will obstruct innovation.

The Group is also facing an inquiry by RBA on the obligation of surcharging bans on retailers by APT. BNPL players impose a fee of 3-6% on merchants. RBA is concerned that the costs that merchants pay is also being recovered from the charges, tactfully passed to customers via higher prices of goods.

APT’s innovative use of digital technology is expected to thrive for long. However, still, there is uncertainty around its short to medium term viability depending on spending patterns of consumers and how government stimulus measures along with labor force recoveries warrant consumer’s ability to pay later.

(NOTE: Currency is reported in Australian Dollar unless stated otherwise.)

Why was Terra Classic Crypto rallying?

All You Need To Know About Swerve SWRV Crypto