Four ASX listed stocks are trading higher because of the recent announcements they have released. The major drivers of growth for the companies are positive and are supporting their long-term growth. Companies like Clinuvel Pharmaceuticals Ltd., Praemium Limited, Resolute Mining Limited and Zip Co Limited saw a rise in stock prices in recent days. Let’s look at the reason behind the surge in stock prices of these four companies.

Clinuvel Pharmaceuticals Ltd is a leading and innovative Australian company focused on the development of SCENESSE, its proprietary first-in-class drug, as a photoprotective medication in a range of UV and light related skin disorders and as a depigmentation therapy in the common skin disorder vitiligo.

Currently the company has Scenesse in the market, which is used for the avoidance of phototoxicity in grown-up patients with erythropoietic protoporphyria (EPP). EPP is a unique metabolic condition which is responsible for serious phototoxic reactions when patients uncover the surface of their skin to visible light.

The stock of CUV closed the day’s trading at $29.000 per share on 14 January 2020, with no change from its previous closing price. The company has a market capitalisation of $1.43 billion as on 14 January 2020. The total outstanding shares of the company stood at 49.41 million. The stock has given a total return of 7.65% in the time period of 1 month.

Praemium Limited is a worldwide leader in providing technology platforms for managed accounts, investment administration and financial planning. The company services in excess of 300,000 investor accounts covering over $140 billion in funds globally for more than 1,000 financial institutions and intermediaries, including some of the world’s largest financial institutions. 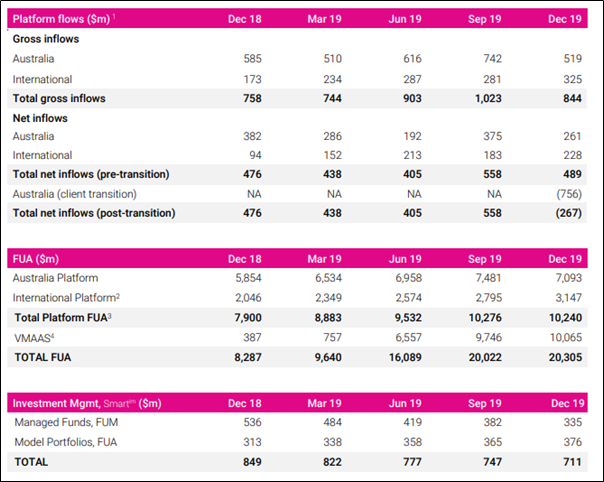 Resolute Mining Limited is engaged in the business of gold mining, development of resource projects and prospecting and exploration for minerals.

Recently, the company released its guidance for FY20, and it expects to increase its production to 500,000 ounces of gold this year, which is about 30% higher on year on year basis.

The company also reported production for 12 months to 31st December 2019. Key highlights are:

Zip Co Limited is one of the top players in the payment industry and digital retail finance. It offers point-of-sale credit and digital payment services.

The company recently announced a record quarter for Q2FY20. Key highlights of the quarter are given below:

During the quarter the company completed the acquisition of PartPay, a global instalment technology platform. PartPay will provide exposure to United States, United Kingdom, New Zealand and South Africa.