Why Is The Market Eyeing This Gold Producer – SBM

Acquiring 100% of Green Dam Project & Reduced Production Forecast for FY 19: St Barbara Ltd (ASX: SBM) has recently signed an agreement with Element 25 Limited (“E25”) to acquire 100% of Green Dam Project and paid in cash the total consideration of $700K. Further, St Barbara will also yield Element 25 the Net Smelter Royalty of 2 per cent on all the future production from the Green Dam Project. Therefore, E25’s shareholders will receive the benefit from the exploration done by SBM. Meanwhile, SBM’s stock has fallen 30.80% on ASX in the past three months as on April 11th, 2019 after the Paste Aggregate Fill (PAF) circuit which was expected to be operational in the early second quarter of December FY19 has been delayed. PAF is now projected to be completed in the fourth quarter of June FY19, which will affect the projected gold production for the rest of FY19. As a result, the company for FY19 is now projecting the production to be in the range of 235,000 and 240,000 ounces, which is lower than the previous forecast for production to be in the range of 245,000 to 255,000 ounces. The company is currently expecting AISC to be in the range of A$980 to A$1,000 per ounce, which is higher than the previous guidance for AISC to be in the range of A$930 to A$970 per ounce. Further, for FY20, SBM is expecting production to be in the range of 200,000 and 220,000 ounces. Additionally, for FY21 & FY22, the company is expected production to be about 230,000 ounces per annum. Moreover, for FY20, the production will rely upon ventilation, which is a key helper for future operations and depends upon the ongoing optimization. This constrained will remain until the additional ventilation from the Gwalia Extension Project is available, as projected, is scheduled to take place in the second half of FY20. The production in H2 FY20, therefore, will compete with the development related to GMX. Additionally, for the first half of FY 19 ending 31 December 2018, the company has reported the statutory profit after tax of $82.56 million compared to the $105.84 million in the corresponding period last year and has reported for 1H FY 19 the underlying profit after tax of $77.4 million compared to $98.35 million in 1H FY19. 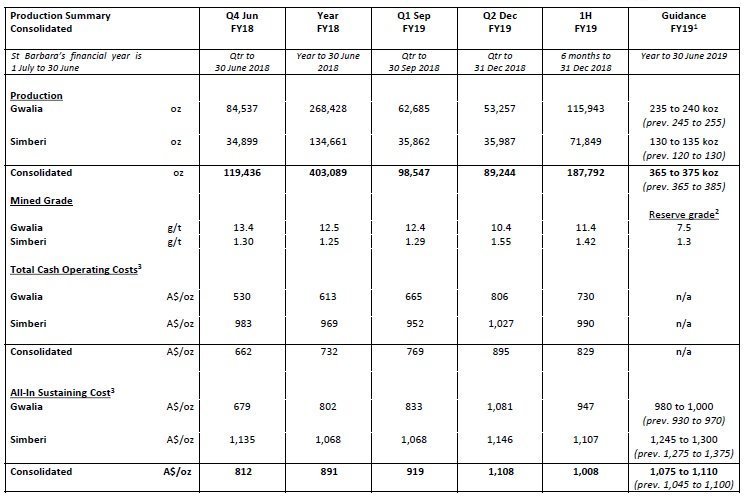