Penny stocks are those type of stocks that trade at a very low price, and the market capitalisation of these stocks is very low as well. These types of stocks have upper circuit and lower circuit. The upper circuit represents the price of a stock that cannot increase beyond a pre-determined percentage and lower circuit on the other hand, represents the price of a stock that cannot be reduced by a particular percentage. The positive news about a company always have a positive impact on its stock prices, and can be a good sign for the investors, irrespective of whether it is hitting the upper circuit or not.

Let us look at the three ASX listed penny stocks from different sectors.

Recently, SPT declared a date for AGM to be held on 30 October this year.

On 14 October 2019, the company announced on inking of agreements with both Shopify and Divido. The new agreement will provide a solution to more than 800,000 merchants across 20 countries for Shopify and payment solution to 1,000 merchants of Divido, banks and so forth. SPTâs technology-based solution has been incorporated with the platform of Shopify. As a result, Shopifyâs merchants can make an addition of SPTâs BNPL solution to their websites to provide their consumers with a choice of BNPL payment.

SPT striking a deal with Divido is anticipated with the companyâs BNPL solution to join Dividoâs multinational platform for lending money, where lenders and retailers are connected.

The solutions would be launched in the United States post its initial launch in the United Kingdom region. The company also signed several agreements with several known US brands such as Eight Sleep, Chill Technology, BlueFly, Ace Marks, Nili Lotan, Ashford, and 1800-Accountant.

SPT on 19 September 2019, stated that Gil Don, the companyâs co-founder had decided to quit from his position as SPTâs CEO and take responsibility as General Manager of EMEA. The company would have a new Chief Executive Officer Mr Brad Paterson with effect from 1 October 2019.

Revenue boosted by 293 per cent for the half-year period

On 30 August 2019, SPT reported the half-year report of the period ending 30 June this year. The highlights are as follows:

MMM recently on 16 October released a copy of its new Constitution as approved and adopted at the General Meeting of the shareholders conducted on 29 August 2019.

On 26 September 2019, the company announced that it has given a nod to structured debt transactions with two existing investors, coming to $8 million in total.

Each of the United Statesâ centered venture capital entity Union Square Ventures (USV) via 2 affiliated funds and a subsidiary company of Woolworths Group Limited (ASX: WOW), made an investment of a further $4 million.

Key Terms under USV Convertible Bonds are anticipated to be as follows; 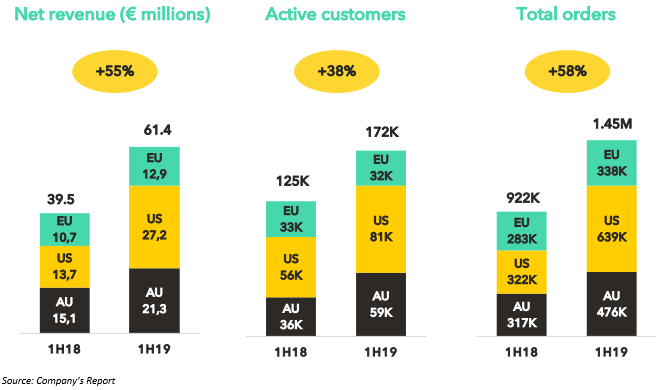 Roots RZTO technology increases cannabis yield up to 118 per cent

On 16 October 2019, the company provided an update wherein it mentioned that it had increased the dry cannabis flowers yield by 118 per cent relative to uncooled crops from various strains under a climate-controlled greenhouse at Canndescentâs facilities in Southern California. The outcomes were attained at the US growing facilities of cannabis producer and pursue a commercial sale and installation in May this year.

ClearVue and Roots to work together on greenhouse opportunities

On 14 October 2019, the ClearVue Technologies Limited (ASX: CPV) and Roots sustainable and agricultural technologies updated the market on inking a collaboration agreement to delve into complementary sales prospective under the growing greenhouse space including the construction of a world-first demonstration greenhouse in Israel.