Retail property is a type of property that is used for retail business. It can be an outlet, a shopping facility or any other physical form of service business. Technology, particularly mobile technology has given huge power to the consumers. They are using this power and bringing changes across various sectors including retail property sector.

Strong growth of online platforms engaged in the retail business is resulting in a negative impact on the global retail property market. E-commerce businesses, like Amazon are disrupting the retail real estate industry. Moreover, the impact is quite visible in “significant changes in value” in retail properties. A number of struggling retailers are shutting down their stores, while several others are becoming extremely selective about where to open their outlets, highlighting the dimming prospects for the global retail property market.

The only escape is to give a personalised experience to customers and bring in technological updates to stay relevant in the current highly competitive market.

Discussed below are five companies engaged in providing retail property related solutions. Let us have a look at the recent updates and performance of these companies listed on the ASX.

Australia-based diversified property group, Stockland focuses on developing sustainable communities for people so that they live, shop and work in a better way. The company, which was formed in 1952, has a huge portfolio of retail town centres, in addition to other properties like villages for retirement living and residential communities.

In early July 2019, the company announced a capital partnership with privately owned business Capital Property Group (CPG) for Aura on the Sunshine Coast, the largest master-planned communities in Australia. Under the terms of the deal, CPG acquired a 50 per cent stake in the project in exchange for nearly 30 per cent premium to book value.

Aura, which has an end value of $ 5 billion, will be home to more than 50,000 people over the coming two-three decades. Stockland will continue managing the project development, as well as cater to the ongoing delivery of the Aura community. Stockland would acknowledge the accounting profit related to this investment during the financial year 2020 period, which would be partially offset by lesser revenue due to SGP’s reduced project interest.

Mirvac Group, with major focus on the Australian cities of Sydney, Melbourne, Brisbane and Perth, operates in the retail, office and industrial sectors. The diversified property group currently manages assets worth more than $18 billion. Additionally, it has a Pop-up Retail division, which offers retail space solutions to its local as well as national clients.

The company on 3 July 2019 announced the completion of a security purchase plan (SPP), raising A$46.2 million with the issue of around 15.9 million new stapled securities. MGR issued each security at an issue price of A$2.90. The securityholders of these stapled securities will not receive dividend/distribution for the first half of 2019, as these were issued and allotted after 27 June 2019, the relevant ex-distribution date.

Except for this change, all the other features of these securities remain similar to the existing stapled securities of Mirvac Group. The SPP offer saw the participation of 14 per cent of the eligible securityholders in Australia and New Zealand. The new stapled securities were scheduled to start trading on 5 July 2019.

Vicinity Centres is a well-known name in the Australian retail property market. The company has a direct portfolio interest in more than 60 shopping centres. Moreover, it manages 33 assets on behalf of Strategic Partners. Of the total 33 assets, the company co-owns 29 assets. The owner and manager of community hubs is scheduled to release its annual results for FY19 on 14 August 2019.

The company had appointed Commonwealth Bank of Australia (ASX: CBA) and National Australia Bank Limited (ASX: NAB) as the joint lead managers for the issue, which grabbed strong interest from new, as well as existing domestic and Asian bond investors. Vicinity Centres plans to direct the proceeds towards the repayment of its existing bank facilities, in addition to general corporate purposes.

A leading name in the Australian property market, GPT Group has a product portfolio in retail, office and logistics sectors. The company has 13 high quality shopping centres under its retail asset portfolio. It not only owns but manages and develops retail properties across the country. 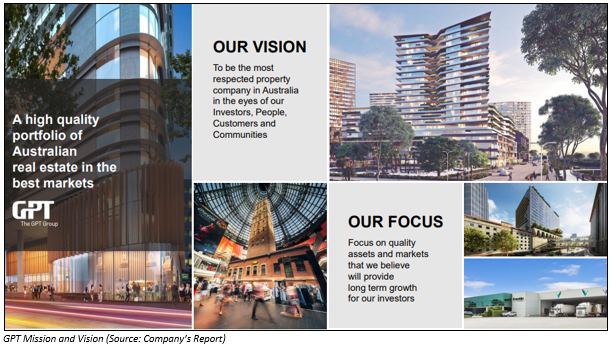 In a market update on 18 July 2019, GPT announced the successful completion of a non-underwritten security purchase plan (SPP) on 15 July 2019. Under the SPP, the company issued each stapled security at a price of A$5.94. It had planned to raise up to A$50 million through the SPP; however, due to it being oversubscribed with nearly A$66.8 million received in total valid applications, the company decided to exercise its option to increase the cap of A$50 million and satisfy all the valid applications.

Proceeds from SPP, in addition to the recently completed fully underwritten institutional placement to raise A$800 million, would be used to fund the acquisition of a 25 per cent interest in the Darling Park 1 & 2 and Cockle Bay Wharf complex in Sydney. Additionally, the company will direct the proceeds towards supporting the next stage development of projects under its office and logistics segments.

Engaged in delivering innovative and sustainable property and infrastructure solutions, Lendlease Group operates in Australia, Asia, Europe and the Americas. Its list of projects includes shopping centres, residential communities, entertainment facilities, hospitals, among other critical infrastructure. Delivering high quality retail experiences, LLC manages 14 shopping centres and retail precincts across Australia, with more than 82 million customers visiting its centres on an annual basis. The company, which is headquartered in Sydney, celebrated its 60th anniversary in 2018. 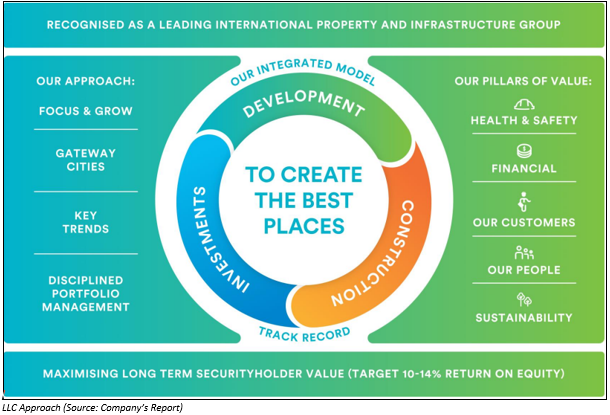 On 18 July 2019, the company updated the market regarding a deal with Google in the United States. The deal covers the development of LLC’s landholdings in the US cities of San Jose, Sunnyvale and Mountain View in San Francisco Bay Area, California, into mixed-use communities. Under the terms of the deal, LLC and Google will jointly work on the master planning, entitlement and development of the project.

A maximum of 15 million square feet of area covering critical infrastructure such as residential, retail and hospitality would be developed by Lendlease, while Google will get engaged in the development of its office space within these mixed communities. The two companies would work jointly on the project for a period of the next 10-15 years. The civic components planned under the project hold an estimated end development value of nearly A$20 billion. Commencement of the development work, pending planning approval, is expected by 2021.