Gold Spot (XAU/USD) recently made its 52-week high at US$1557.09 on September 4, 2019, and at the time of writing traded at US$1460.94 (as on November 25, 2019, at 13:01 (UTC+11), a decline of ~6.17% from the 52-week peak level. With the mixed new over macro-economic concerns, investments in equities have improved and therefore gold seems to be losing its shine for a while. However, gold is an important hedging tool against any risky asset, therefore certain exposure in the yellow metal always balances the risk to reward ratio. Moreover, on technical analysis front, it must maintain levels above US$1400 in order to make fresh upside rally. Important Australian gold stocks with recent updates are Oceanagold Corporation (ASX: OGC) and Newcrest Mining Limited (ASX: NCM).

Multinational gold producer OceanaGold Corporation (ASX: OGC) has its headquarter situated in Melbourne. While its technical and projects office is in Brisbane, information technology, finance office in Singapore and overseas office in Denver, United States of America.

Operating cash flow for first three quarters stood at $157.6 Mn, whereas $32.4 Mn for the third quarter. Earnings before Interest, Depreciation and Amortisation (EBITDA) and net profit for first three quarters stood at $169.0 Mn and $5.8 Mn, respectively. The adjusted net profit (after income tax and before gain/loss on fair value of undesignated hedges and impairment) for the nine months period stood at $32.8 Mn. The company reported third quarter EBITDA, net loss and adjusted net loss of $33.9 Mn, $21.9 Mn and $5.3 Mn, respectively.

Capital expenditure for the September quarter declined by 33% to $54.8 Mn, mainly due to reduced capitalised pre-strip at Haile and Macraes, lower general operating capital at Macraes and lower Haile and Didpio growth capital. 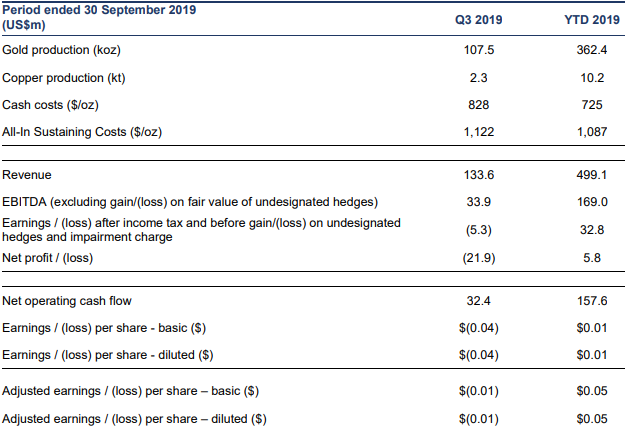 FY19 Guidance: Total capital expenditure for FY19 has been estimated at the upper range of $260 Mn, a reduction of $20 Mn and at lower range of $240 Mn, an increase of $5 Mn. The revision in the guidance can be attributed to reduction in general operations capital, growth capital and exploration.

Australia based Newcrest Mining Limited (ASX: NCM) is involved in the activities like exploration, mine development and its operations along with the sale of gold and gold/copper concentrate.

On November 22, 2019, NCMâs JV partner in Tanami and West Arunta regions of WA, âEncounter Resources Ltdâ announced update on recent drilling activities in the Tanami region of Western Australia (WA) and commencement of Reverse Circulation (RC) drilling at Mojave prospect. Initially up to nine RC holes, drilling to a nominal depth of 300m, are proposed at Mojave with assay results expected in January 2020.

A total of 2,292 meters of RC drilling has been completed at Afghan with assay results expected in December 2019. Assay results from broad-spaced RC drilling at Hutchâs Find has defined a 2 km long east-west trending zone of gold anomalism which remains open both east and west. Aileron JV has been recognised by WA Government through co-funded drilling grant of up to $150,000 under the Exploration Incentive Scheme with drilling planned for July 2020.

Septemberâ19 Quarter Key Highlights: The Company reported reduction in injury rates reflecting strong safety focus. Gold production and copper production for the quarter were reported at 512koz and 25kt, a decrease of 23% and 14% in the previous quarter, respectively. The reduction can be attributed to the impact of a series of planned shutdowns, plus due to the impact of lower grades at Cadia and Lihir, the change in processing strategy at Telfer and shutdowns overruns at Cadia.

Group All-In Sustaining costs (AISC) for the period was reported at $899 per ounce, an increase of $179 higher than previous quarter. This was driven by lower production and greater costs on a $/oz basis at all operations, partly offset by lower levels of sustaining capital spending and the effects of a weaker Australian $ exchange rate. Group AISC margin for the quarter was reported at $537 per ounce.

FY20 Guidance: The Company has updated FY20 guidance with the inclusion of mine named Red Chris. Guidance for all other operations continues to be the same, though Telferâs full year gold production is anticipated to be about the bottom of its range. Its free cash flow is expected to be lower in the first half of FY20 because of impacts from shutdowns and the acquisition of Red Chris.