The cannabis industry is one of the most debated sectors at a global scale, and significant progress has been seen in this industry worldwide. Medicinal cannabis products manufactured in Australia must be created under a Good Manufacturing Practice (GMP) license. The Australian Government, through the Office of Drug Control and the Therapeutic Goods Administration (TGA), regulates medicinal cannabis in Australia.

The cannabis plant is also known as marijuana, hash, weed, and pot, among other names. Historical records suggest that cannabis has been used as a medicine, food and resource for centuries. The cannabis plant comprises over 100 different cannabinoids, but there are two major constituents which are therapeutically more important: Cannabidiol (CBD) and delta-9-tetrahydrocannabinol (THC). Both the components act through the endocannabinoid system in the human body and have different effects.

Pot stocks in Australia commenced on a high last year after the Australian governmentâs announcement that it would legalise the export of marijuana. Yet, most of the shares spent the following twelve months in the decline. The fall could be attributed to the fact that some of the traders got worried by the volatility of the medical cannabis market, which affected almost the entire industry.

Due to the volatility, many pot stocks have been highly undervalued. This, however, could be good news for long term investors who are looking to buy into the cannabis sector or strengthen their capital spending while encountering minimum prices, provided they are prepared to ride out the market fluctuations.

In this article, we are discussing one of the ASX listed pot stocks, which is performing well in the medical cannabis industry and is achieving its set goals.

Let us zoom the lens on the achievements of Althea

An ASX listed company, Althea Group Holdings Limited is a licensed producer, supplier and exporter of medicinal cannabis and currently operates in Australia and the United Kingdom. The company offers medicinal cannabis (pharmaceutical grade) products for improving the lives of patients suffering from debilitating disorders. Althea has plans to expand its business in Asian and European emerging markets. The company provides various products, access and management services, education to support health care professionals and eligible patients in directing the treatment pathways of medical cannabis. Althea was founded in 2017 and has made immense developments within a short period.

Also, the company announced that the performance of its product CBD100 had exceeded expectations. Althea sold 206 bottles of the product within 18 business days of it becoming commercially available.

Altheaâs CBD100 is a highly concentrated cannabidiol (CBD) medicinal cannabis product comprising primarily cannabidiol, along with minor traces of flavonoids, terpenoids, and other cannabinoids, and containing <1mg per ml of tetrahydrocannabinol. 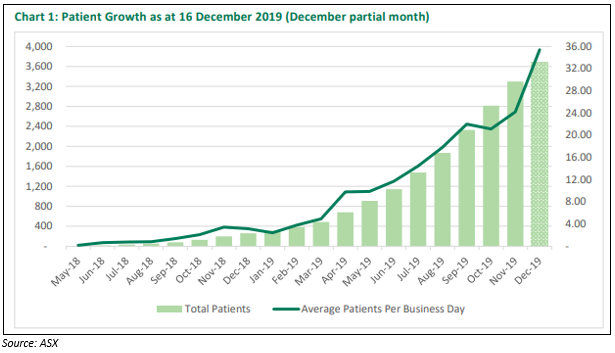 On 14 November 2019, Althea announced that the Bristol site of the companyâs wholly owned subsidiary MyAccess Clinics has been listed with the Care Quality Commission (CQC) and received a license from CQC. Althea also mentioned that CQC license approval is an essential milestone for MyAccess Clinics, and it has become only the second medical cannabis clinic in the United Kingdom to be granted a Care Quality Commission license.

Supply of product for the clinical trial

On 13 November 2019, Althea announced that the company had entered in an agreement with the Australian Centre for Cannabinoid Clinical and Research Excellence to provide products for an open-label clinical trial evaluating medicinal cannabisâ use for symptom control in advanced cancer. Altheaâs products would be supplied for the trial on commercial terms, and the number of patients targeted for the trial is more than 600.

On 12 November 2019, Althea announced its ongoing expansion in Europe with its proposed entry in the German cannabis market. Althea and nimbus health GmbH have signed a Memorandum of Understanding (MOU) for the distribution and sale of medicinal cannabis products of Althea in German markets through the pharmacy network of nimbus health.

Under the terms of the MOU, Altheaâs therapeutic cannabis products would be sold and distributed by Nimbus in Germany under the brand name of Althea. Based on expected timelines provided by Federal Institute for Drugs Germany and Medical Devices and Office of Drug Control (ODC) Australia, Althea expects the first shipment of its medicinal cannabis products to come in Germany early in the first half of 2020.

Tags:
ASX: AGH cannabis Pot Stocks
All pictures are copyright to their respective owner(s).Kalkinemedia.com does not claim ownership of any of the pictures displayed on this website unless stated otherwise. Some of the images used on this website are taken from the web and are believed to be in public domain. We have used reasonable efforts to accredit the source (public domain/CC0 status) to where it was found and indicated it below the image.