When Tiny is Big! Nanotechnology Transforming the Health Care Industry

Okay, so here we are not talking about the video game ‘Tiny and Big’, but about the miniaturisation science that has the potential to transform the health care industry in the coming years.

The notion here is “Nanotechnology” - an amalgamation of science, engineering & technology.

Also called Nanoscience, the interdisciplinary field nanotechnology revolves around the study and application of exceptionally small things and can be applied across all the other science disciplines as diverse as physics, chemistry, biology, materials science and conducted at a nanoscale at around 1-100 nanometers (one nanometer is 1/billionth of a meter or 1/millionth the size of an ant).

The Chronicle of Nanotechnology

Coined by Professor Norio Taniguchi during his explorations of ultraprecision machining in late 1960s, the concept behind “nanotechnology” pioneered almost six decades ago when renowned physicist Richard Feynman shed light on a process in which researchers would be able to maneuver and control individual atoms and molecules, in one of his talks at CalTech held in December, 1959.

In 1981, the modern nanotechnology began when scientists were able to actually "look at" individual atoms with the advent of the scanning tunneling microscope.

The Miniscule on Industry’s Focus

While they say science is mystery and there’s still a lot to delve into, the commercial potential of the miniscule is becoming an industry focus.

In the recent years, the industry has witnessed a rapid commercialisation of nanotechnology-based products which nowadays are being utilised to a great extent in a gamut of fields from cosmetics to clothing, car bumpers, consumer electronics and biotech and whatever else one can think of.

Nanomedicines Approaches- From Research Laboratory into Our Body

When materials at such invisible scale enters the biological systems, their unique nano scale properties as well as their extremely small size enable them to stream in blood and perform the tasks they are powered to do such as -

On the back of continuous advancements together with its usefulness in the field of nanomedicines, nano scale therapeutics, implantable medical devices, drug delivery systems, biosensors and imaging technologies, nanotechnology is becoming a key driving force behind revolutionizing the health care industry. Some of the prospective applications are listed below-

Preventing the disease outbreak especially the early detection of foodborne pathogenic bacteria is critical for preserving public health. The graphene based nano sensors enable wireless monitoring of biomedical events within 24 hours, providing a broader estimation of the healthcare status that can act as a boon.

Advanced nanotechnology and nanomaterials have been receiving an increasing support from both government and industries that has been directly shaping the growth of nanotechnology in medical devices market. 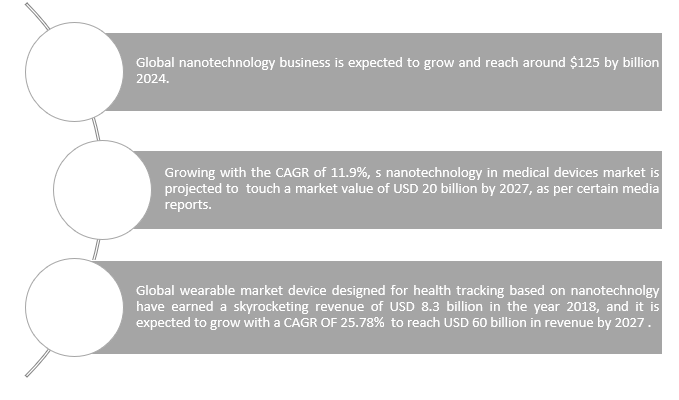 Despite being a rapidly developing, advancing and growing industry, there is mounting apprehensions relating to the toxicity of certain nanomaterials such as titanium dioxide. In addition, high costs of nanomaterial synthesis may impact the growth of the nanotechnology industry adversely.

Pertaining to this, researchers across the globe are developing an eco-friendly, cost-effective and convenient protocol for green synthesis of nanoparticles from various plant and microbial sources, in anticipation of increasing the production and decreasing the cost of processing, thereby reducing the cost of the nanomaterials. This would lay the foundation for new players to enter the nanomaterials market.

Analysts believes that the global demand for nanomaterials would continue to escalate owing to several factors including a rise in the commercial applications, cost effectiveness, increase in public and private investments towards nanotechnology research, together with the unique properties, government organisations growing support, and rapid development of novel and innovative nanomaterials.

To conclude, tiny they might be, but their impact will be big.