The concept of 'Buy Now Pay Later' or BNPL that did not even exist a few years ago has now become an emerging space of the Australian economy. The BNPL service providers enable the consumers to receive the desired product in full by paying a fraction of price at the time of purchase. The BNPL provider pays the retailer in full and collects the balance amount from the consumer in instalments, accepting the default risk of the payment.

In a review conducted by the Australian Securities and Investment Commission in November 2018, it was found that the use of buy now pay later arrangements has increased about five-fold between FY 2015â16 and FY 2017â18 as more and more users are using the facility regularly.

There are many BNPL providers operating in Australia, including Z1P, APT, FXL, SPT etc. that are listed on the ASX. Recently, a US lender Sezzle Inc has also hit the ASX boards, joining the emerging Buy Now Pay Later space. Let us know more about a few of the ASX-listed BNPL stocks below:

A technology driven payments company, Sezzle Inc. (ASX: SZL) has recently got listed on the ASX with an aim to financially empower the next generation. The company offers a payments platform that promotes secure and fast payments between customers and retailers. It has an interest-free, short-term instalment payment plan that provides budgeting and financing benefit to customers.

Recently, the company informed through an ASX announcement that its operating metrics are moving actively in a positive direction. In June 2019 quarter, the company had around 5,048 Active Merchants using its platform relative to 815 Active Merchants in the prior corresponding period. The Underlying Merchant Sales of Sezzle has also improved from US$2.9 million in pcp to US$41.9 million in June quarter.

The company completed its Initial Public Offering oversubscribed recently due to a strong demand from institutional and retail investors. The applications for the companyâs CDIs exceeded the capital raising target of US$30 million, leading to a significant scaling back of applications. The company issued 35,714,286 CDIs at an issue price of $1.22 per CDI for raising US$30 million.

In an ASX-update on 1st August 2019, the company notified that it has entered into a partnership with Big W, part of Woolworths Group Ltd (ASX: WOW) to provide Zip interest free payments to its clients.

Recently, the company also informed that it has mandated NAB (National Australia Bank Limited) for the establishment of its Master Trust Programme. NAB will arrange a series of ABS investor meetings for the programme.

In its Q4 FY19 Quarterly Update, the company has reported a rise of 17 per cent in its quarterly revenue to $27.0m. The receivables of the company improved 21 per cent on the previous quarter to $682.6 million. 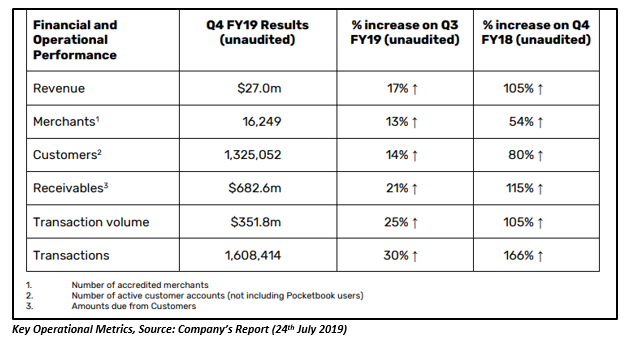 The Australian-headquartered technology-driven payments company, Afterpay Touch Group (ASX: APT) is working with a motive to make purchasing feel great for its customers. The company allows retailers to offer BNPL service that does not require a payment of upfront fees or interest from the customers.

Afterpay released its first-half results for the financial year 2019 in February this year. The company reported Underlying sales of $2.3 billion during the period that was 147 per cent more than the pcp figure. On a pro forma basis, the companyâs total income rose by 91 per cent on pcp to $116.1 million. 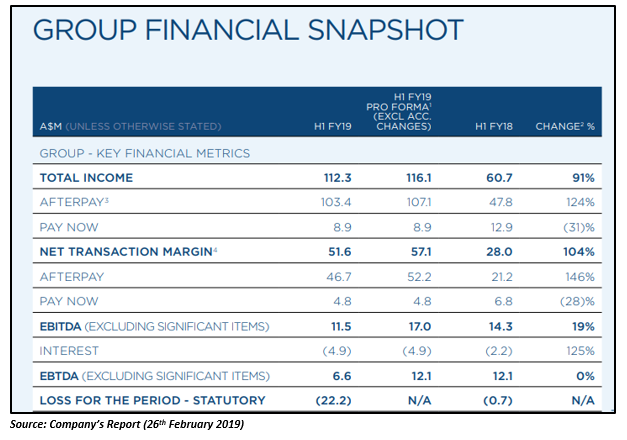 The Australian-headquartered FlexiGroup Limited (ASX: FXL) offers a wide range of finance solutions to business and consumers with the help of its business and retail partners. The company provides services like credit cards, BNPL products and consumer and business leasing.

On 22nd July 2019, the company informed that it has added several high-profile retailers to its BNPL platform, Humm. The company also mentioned that humm is driving large value sales with ATV of more than $400 for âlittle thingsâ online and ATV of ~$3,760 with its âbig thingsâ wallet. According to flexigroup, the transaction volume has improved by 16 per cent, and the total number of transactions has increased by 22 per cent after the launch of humm.

In its 1HFY19 results, the company reported a rise of 17 per cent in its active customers to 1.2 million relative to pcp. The transaction volume and the receivables of the company were 19 per cent and 13 per cent up on pcp to $1.31 billion and $2.55 billion, respectively. The Cash NPAT of flexigroup was22 per cent down on pcp at $31.9 million. 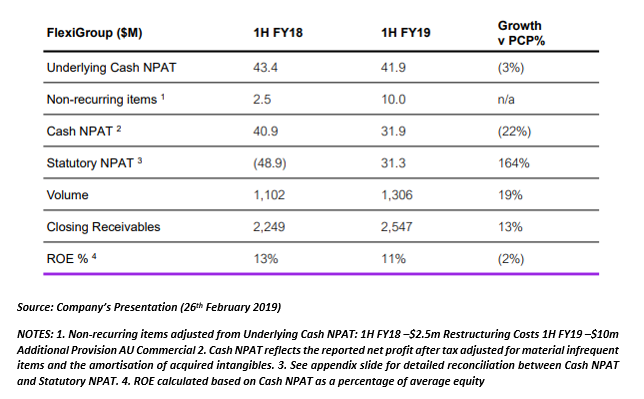 A payment method solution company, Splitit Payments Ltd (ASX: SPT) offers the service of splitting the cost of the purchase to customers into interest and fee-free monthly payments through their existing debit or credit card. It also allows merchants to provide an easier payment method to their customers with instant approval.

In its recently released quarterly updates for the June 2019 quarter, the company reported that around 72 new active merchants joined the company during the period, taking its total active merchantsâ figure to 509. The company also recorded a rise of 108 per cent in its Merchant Transaction Volumes on pcp to A$31.9 million. Splitit signed two new partnerships subsequent to end of the quarter, with EFTPay and GHL.

During the year ending 31st December 2018, Splititâs revenue was 203 per cent up on pcp at USD 789k from USD 260k in FY 17. The company also observed a 117 per cent rise in its active merchants to 380. The underlying merchant transactions of the company also improved 253 per cent to AUD 80.2 million from AUD 22.7 million in FY 17. Splitit posted a net loss of USD 4.6 million during the period. 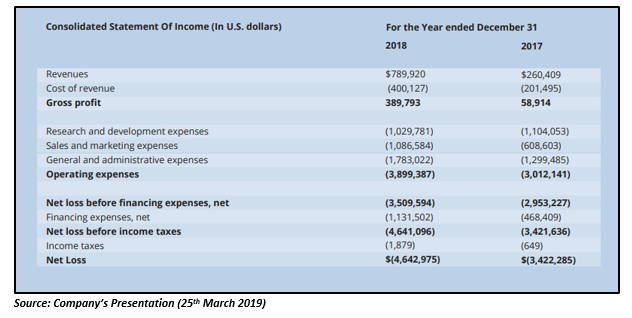