Incorporated in 1983 and listed on ASX in 2000, Pro Medicus Limited (ASX: PME) is a group within the health care domain that serves imaging centres, hospitals and other health care groups globally by offering radiology imaging software and services. Pro Medicus had bought Visage Imaging in January 2009 which has evolved as a worldwide provider of leading-edge enterprise imaging solutions, developing the best-of-breed enterprise imaging strategy. Visage 7 has an intelligent thin-client viewer that delivers remarkably fast, multi-dimensional images. The company offers top-line RIS, PACS and e-health solutions comprising of wide-ranging end-to-end offerings in the field of radiology.

Recently, on 4 November 2019, Pro Medicus declared to the market that it had signed 5-year contract with OSUWMC or The Ohio State University Wexler Medical Center worth $9 million. It was notified to the market that Visage Imaging, Inc., which is Pro Medicus wholly owned U.S. subsidiary, has signed this contract to implement Pro Medicus’ Visage 7 technology across all the radiology departments of OSUWMC’s spanning seven hospitals and outpatient clinics, as well as integrated to OSUWMC’s electronic health record. A large multi-disciplinary academic medical center located in Columbus, Ohio, OSUWMC employs around 1,700 physicians, 30,000 staff, supporting over 1,500 inpatient beds and would be integrated into its electronic health record

This contract is based on a transaction-based licensing mode with potential advantages. It is expected that the execution of this contract would begin in the second quarter of the financial year 2020 to complete in mid-2020.

But why Pro Medicus was being slammed earlier?

As per certain media sources, there has been a lot of buzz in the market as Pro Medicus peer company Canon bagged a $47.2 million deal to roll out a new medical imaging software for Western Australia Health. Consequently, Pro Medicus shares tumbled down by 22%, going under tremendous pressure in the last two weeks till 1 November 2019.

Highlights from the Annual Report for the Financial Year 2019 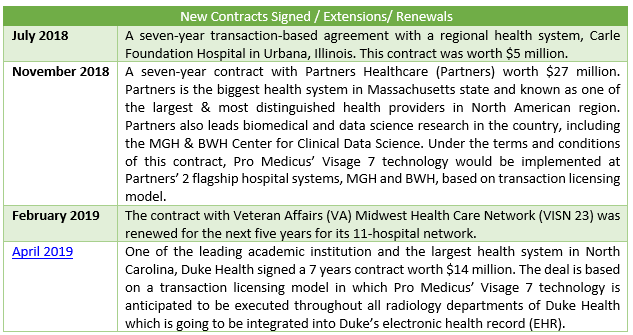