What’s Happening In the US and Asian Equity Markets?

Some experts believe that there is a considerable degree of interdependence between the equity markets of the US and other countries. It has been observed by analysts that there is some day-to-day linkage between the equity returns of the US and Asian equity markets. Whenever we think about the stock market, the first thing that comes in our mind is New York Stock Exchange or Nasdaq, because these two exchanges account for a major portion of equities in North America and worldwide. The United States is the leading economy in the world, having major stock exchanges like Nasdaq, New York Stock Exchange (NYSE) and Chicago Board Options Exchange.

The Asian market is majorly divided into two parts: The Developed Economies and the Developing Economies. The highly developed countries comprise Japan and Asian Tigers (Hong Kong, Singapore, South Korea and Taiwan). On the other hand, the developing economies include India, China, Bhutan, Cambodia, etc.

Let us take a look at the key events happening in the US and Asia Equity markets below: 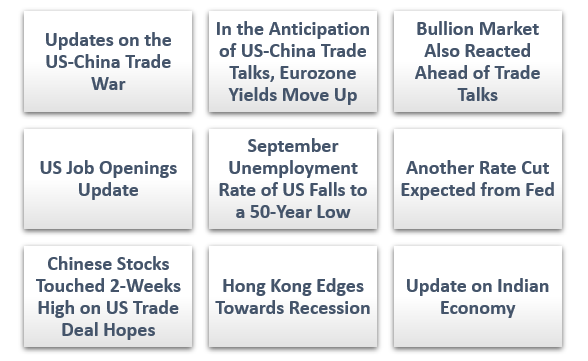 Updates on the US-China Trade War:

The trade negotiators from the US and China have continued their trade talks in order to find out a middle ground of the 15 months trade war that is ongoing between the two players. U.S. trade representative Robert Lighthizer, Chinese Vice Premier Liu He and Treasury Secretary Steven Mnuchin are trying to reduce differences, which will be enough to avoid the tariff hike on $250 billion worth of Chinese goods, scheduled for Oct. 15.

In the Anticipation of US-China Trade Talks, Eurozone Yields Move Up:

Eurozone government bond yields increased slightly on 10th October as investors waited to learn on any development in trade talks between the US and China, and a crunch meeting between the Irish and British leaders over Brexit. Yields have gone up in recent days, but analysts stated that any gains are probably capped until any solution is reached over the prolonged trade conflict between the US and China, world’s two largest economies.

Also, French industrial production has declined by 0.9 per cent in the month of August, against a projection of 0.3 per cent growth, but the production numbers were typically overlooked by the market as all people were eyeing the trade negotiations between China and the U.S.

The gold prices reached their one-week high level on Thursday as investors flocked to the safety of bullion following inconsistent reports about U.S.-China trade talks. Investors often use gold as a hedge against financial and political uncertainty.

U.S. job openings declined to a one and a half year low level to 7.05 million in the month of August and the hiring declined, demonstrating that employment growth has slowed down largely because of receding demand for labour as the economy loses impetus. The Labour Department reported the third straight monthly drop in vacancies, irrespective of that, job openings are still plenty enough to ease financial market fears of an impending recession. The job openings are being tightly scrutinized by the investors as they show signs of whether a loss in business confidence, which has hampered capital investment, is spilling over to employment.

September Unemployment Rate of US Falls to a 50-Year Low:

Another Rate Cut Expected from Fed:

U.S. producer prices unpredictably decreased in the month of September which led to the smallest annual increase in nearly three years which is expected to give the Federal Reserve further room to cut interest rates for the third time this year in October. The trade war which is been going from the past 15 months has pushed manufacturing into recession and eroded business investment.

Jerome Powell, the Chairman of Federal Reserve, has hinted that the Fed is likely to announce another rate cut later this month, because global growth has slowed and uncertainties around trade war, Brexit and other issues have made the outlook risky. The Fed has already reduced the range of federal funds rate to 1.75 to 2 per cent in mid-September, its second cut since July.

China’s stocks climbed to a two-week high level on 10th October as investors hoped for a fractional trade deal between US and China. However, a report stating that Chinese officials are likely to cut short their visit to the U.S. capped gains.

Hong Kong is moving closer to the recession as a vital sign of the private sector’s economic health plunged to a 10-year low, under the joint effect of the mounting US-China trade war and political instability in the city. It is been projected that Hong Kong will not be competent enough to prevent recession. Since early June, Hong Kong has been involved in its most terrible political crisis in last ten years.

India’s economic slowdown is one of the major drivers of slowdown in 2019 as India is the world’s third largest economy on a PPP basis. The Reserve Bank of India (RBI) has aggressively reduced its policy rate, which is likely to help in an investment-led recovery, though downside risks to consumption remain.

So, these were the major things that have kept the investors’ flocked to the US and the Asian equity markets. We will be back with further updates on these markets soon.