Every industry or sector has its key role in developing an economy. In Australia, the energy sector is a major contributor towards its economic development in terms of employment, export earnings and GDP. The country has abundant and diversified energy resources. Australia holds good potential for non-renewable as well as renewable resource base development. Moreover, it plays a key role in catering to the energy needs worldwide.

Bass Oil Limited (ASX: BAS) is engaged in the production of oil from its low-cost oil production assets, which are located in Indonesia. The company, through a release dated 2nd September 2019, unveiled its results for the first half of the calendar year 2019.

A Look at First Half Performance

From production optimisation and scale remediation activities, BAS recorded a rise of 31.2% in production to 69,370 barrels in 1H CY19 as compared to 53,000 barrels in the same period a year ago. During the reported period, the company registered sales revenue amounting to US$2.09 million as compared to US$1.66 million in 1H CY18, reflecting a rise of 26% on the back of higher prices and production.

At the end of the period, i.e. 30th June 2019, the cash balance of the company stood at US$0.77 million, which witnessed a decline of 10.1% year-on-year, primarily resulted by the third deferred settlement payment of $370,000 to Cooper Energy Limited (ASX: COE) in April 2019. It was also mentioned in the release that the company successfully arranged a private placement amounting to A$0.15 million to sophisticated and professional investors by issuing fresh shares at $0.002 per share, which include a 1 for 2 free attaching option exercisable at $0.004 on or before 30 July 2021. The company also reported a pro-rata non-renounceable entitlement offer amounting to A$2.7 million of new shares on a 1 for 2 bases, at an issue price of $0.002 per share.

Meanwhile, Bass Oil received tenders for the provisioning of 750 horsepower capacity drilling rig for the drilling of the Bunian 5 well. The rig is likely to become available in the month of October 2019.

The stock of Bass Oil Limited closed trading at A$0.001 per share on 2nd September 2019. The stock of BAS witnessed a decline of -25.00% and -50.00%, in the time period of three months and six months, respectively. It has a market cap of A$2.92 million and approximately 2.92 billion outstanding shares.

Galilee Energy Limited (ASX: GLL) is involved in the production and exploration of oil & gas. On 2nd September 2019, the company provided an update to the market in relation to gas production at Glenaras Gas Project. The company referred to its previous announcement and stated that its Glenaras multi-lateral pilot programme is on continuous production as well as representing excellent water rates with the wells flowing water rates of around 6,800 barrels of water per day in aggregate. The company reported that its all 5 lateral wells are on continuous production and they are performing strongly.

It added that the Glenaras multi-lateral pilot programme would be placed on production for an extended period. This would be targeted towards de-watering and lowering the pressure in the surrounding coal for obtaining a commercial gas flow.

As per the release dated 22nd August 2019, the company advised that 100,000 options have been exercised by the option holder at $0.75 and raised funds amounting to $75,000. Moreover, GLL, through another release dated 20th August 2019 announced that it has issued performance rights to its staff and employees under the companyâs performance rights plan.

At the end of the June 2019 quarter, Galilee Energy Limited maintained a very strong cash position of $11.6 million with no debt. It added that the expenditure projection for the next quarter is mainly related to resumed operations of the Glenaras multi-lateral pilot programme and payment of the remaining drilling, completions and facilities costs with the overall programme, which is under the estimated cost amounting to $8 million. The net cash outflow from operating activities stood at A$5.560 million post making major payments amounting to A$4.847 million and A$0.433 million for exploration & evaluation and administration and corporate costs, respectively.

The stock of Galilee Energy Limited closed trading at a price of A$1.310 per share on the trading session of 2nd September 2019, up 4.8% from its previous close. The stock of GLL witnessed a rise of 60.26% and 197.62%, in the time period of three months and six months, respectively.

The company stated that Strike Energy Limited would continue drilling via the remaining High Cliff formation until it reaches the Holmwood Shale. Post reaching a final well TD, on the back of the logging pocket, the well would be conditioned.

The company conducted its Extraordinary General Meeting on 15th August 2019, and the following resolutions were passed:

Strike Energy Limited (ASX: STX) is in the exploration and evaluation of oil and gas resources. The company, through the release together with its joint venture partner Warrego Energy Limited, updated the market regarding activities with respect to the West Erregulla-2 well. As per the market release dated 27th August 2019, the company announced that the joint venture between Warrego Energy Limited and Strike Energy Limited has made a gas discovery in the Kingia sandstone, which is a part of the West Erregulla-2 drilling campaign. It added that Logging While Drilling tools have been recovered to surface. 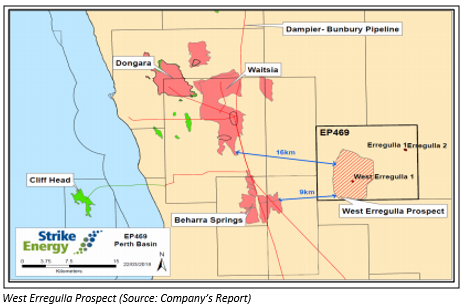 The company communicated that John Poynton has made a change to his holdings in the company by acquiring 1,538,462 securities at the consideration of $100,000. The number of securities held with the director after the change are 7,000,000 unlisted options expiring 21 August 2020 and exercisable at $0.15 per share (direct) and 8,000,001 ordinary fully paid shares (indirect).