What You Need To Know About Fisher & Paykel Healthcare and EBOS Group?

Health care system in Australia is delivered, operated and financed by the central as well as state and territory governments. Moreover, private sector and not-for-profit organisations make contributions towards the country’s health care system. Every investor knows, it is critical to study what’s going on in the market before making any decisions, regardless of the exchange you’re trading on. With that in mind, we’re discussing two ASX listed market players - FPH and EBO.

A leading medical devices and systems company, Fisher & Paykel Healthcare Corporation Limited (ASX: FPH) is engaged in providing solutions for use in respiratory care, acute care, surgery and the treatment of obstructive sleep apnoea (OSA). The comspany is listed on ASX since 2001 and sells its products in more than 120 countries across the globe.

Fisher & Paykel is serving and impacting the lives of ~14 million patients around the globe.

In February 2019, Fisher & Paykel Healthcare signed an agreement with ResMed to settle all outstanding patent infringement disputes between the companies in all venues worldwide.

Under this agreement, all ongoing infringement proceedings against named products were dismissed. The settlement involved no payment by either party.

Full-face Mask for OSA Available in US

In another ASX update, the company disclosed that its new mask F&P ViteraTM for obstructive sleep apnoea (OSA) is now available for purchase in the US market. The product is already available in Australia, Canada, New Zealand and Europe. The company is set to launch the product in other regions, pending regulatory approvals.

F&P Vitera is the company’s new full-face mask used for the treatment of obstructive sleep apnea (OSA), providing high levels of stability and durability through a combination of unique technologies with minimising leaks and pressure on the bridge of the nose by its RollFitTM XT Seal.

The company is expecting capital expenditure for FY2020 to be approximately NZ$150 million, as it increases capacity for both existing and new products and completes construction of the fourth building on the Auckland campus.

According to the company’s 2019 annual report for the year to 30 June 2019, the company completed two significant projects, which are designed to support the future capabilities of its healthcare business in Australia.

During FY2019, the business completed several strategic acquisitions. The company invested $93.6 million during the year. 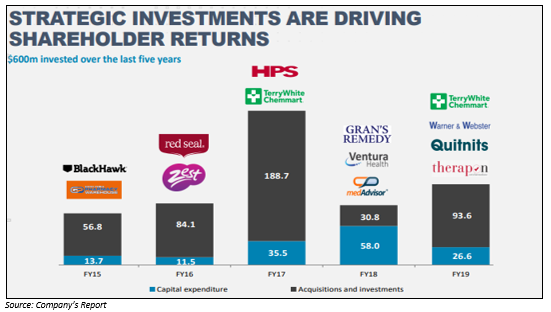 FY19 Performance Based on Healthcare and Animal Care Sectors-

In FY2019, EBOS recorded a solid underlying financial performance, and the company is assured of a significant increase in earnings in FY20.