What Metals Have Been Increasing In Value?

Australian regions are blessed with an abundance of resources on their surface, which contribute to the wealth of the nation. Mining activities in Australia has been a significant contributor to the Australian economy. It has been a primary industry having a great share in providing employment, export income, and royalty payments to Australia. Abundance of mining resources is a driving force for industries around the country, especially in regional Australia. The country holds resources of the nine valuables including rutile, bauxite, lithium, iron ore, zircon, zinc, and gold. The Australian Bureau of Statistics data confirmed that the Australian mining sector exports are booming and setting up records every day with second quarter of 2019, reaching an all time high to AUD 37,875 million. Mining accounts for 1.8 per cent of the total workforce in Australia by employing approximately 238,000 persons (ABS trend data).

To know about commodity market movement and the reasons to invest in mining stocks, do read: Things to Be Familiar With Before Fishing for Mining Stocks

Let’s have a look at the few top mining companies

BHP Group Limited (ASX: BHP) is an Australian based, Metal, Mining and Petroleum company. Headquartered in Melbourne, Australia was founded in 1873. Recently on 8 October 2019, the company has arranged a social value briefing session for investors and analyst.

Increased in revenue for the year ended on 30 June 2019

Below are the highlights for the financial year ended on 30 June 2019; 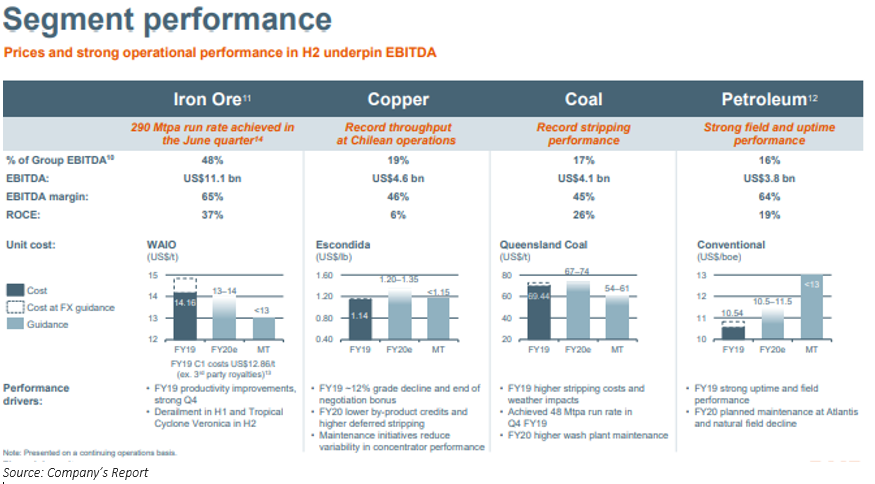 The company has announced the half-year result for 2019, below are the snapshots of the results;

The US$2.6 billion Koodaideri mines is progressing to plan, with procurement, engineering and construction activities as scheduled. The company expect the first iron-ore from koodaideri in late 2021. The Robert river joint venture projects (West Angelas C&D and Mesa B, C and H at robe valley) are progressing through the required approval process. The Mesa H project will experience some delays with contingency plans being assessed if required.

South32 Limited is a mining and metals company. The company is engaged in the production of alumina, bauxite aluminium, metallurgical coal, manganese, energy, nickel, silver, lead as well as zinc. The company, which is listed on ASX, JSE and LSE, operates in Australia, as well as in the regions of Southern Africa and South America. Recently on 16 September 2019, the company has announced the date for Annual General Meeting which will be held on 24 October 2019.

71 per cent drop in profit after tax

On 22 August 2019, the company declared the financial results for the year ending 30 June 2019, below are the highlights of the result;

The company’s Revenue dropped by 4 per cent to US$7.274 billion compared to the previous corresponding year

The company board has decided to pay a final dividend of US 2.8 cents per share (Fully Franked) for the FY 2019