Oral health refers to conditions and health of teeth, gums, muscles and bone in the mouth, and good oral health represents overall health and wellbeing of a person. Dental diseases may impact a personâs appearance and speech, can result in pain, discomfort, embarrassment and also restrict the participation of a person in social settings. The dental care is also one of the essential parts of the health care system.

In Australia, the expansion of the dental industry is supported by the private health insurance service providers. The patient who has private health cover regularly visits their dentist, and they are keen to undergo expensive dental procedures. In Australia, there are more than 1 million dental prescriptions that were dispensed in each year from 2013 to 2017 as reported by the Australian Institute of Health and Welfare (AIHW).

Here in this article, we are discussing four health care stocks which are key players in the dental industry- ONT, SIL, PSQ, SDI

An Australian dental and management service company 1300 Smiles limited (ASX: ONT) which owns and operates full-service dental facilities across Australia including Queensland, New South Wales and South Australia. ONT was listed in ASX since early 2005, and Dr Daryl Holmes is the founder of the company. 1300 Smiles provides use of dental services and practice management to self-employed dentists and hence allow the delivery of services to the patients.

According to an ASX update, the company announced about its AGM, which would be held on 25 November 2019 in Townsville, Queensland. The agenda of this meeting would be the discussion of the companyâs financial statements &reports and General Business, including the following resolutions-

An Australian headquartered health care company Smiles Inclusive Limited (ASX: SIL) is engaged in operating a network of dental practices in Australia under its national brand named as Totally Smiles. The company provides well-equipped Totally Smiles practices which provide various dental services including general, family and specialist services. The main aim of the company is to become a leading national brand in the Australian region.

Pacific Smiles Group Limited (ASX: PSQ) is in the business of dental care, and it operates the Pacific Smiles Dental Centres. The company headquartered in Greenhills, and operates in Victoria, Australian Capital Territory, New South Wales and Queensland.

In an ASX update, the company notified that an AGM would be held on 20 November 2019 at Greenhills. The key business highlights of this meeting would be the discussion on Financial Statements and Reports, including the resolutions- 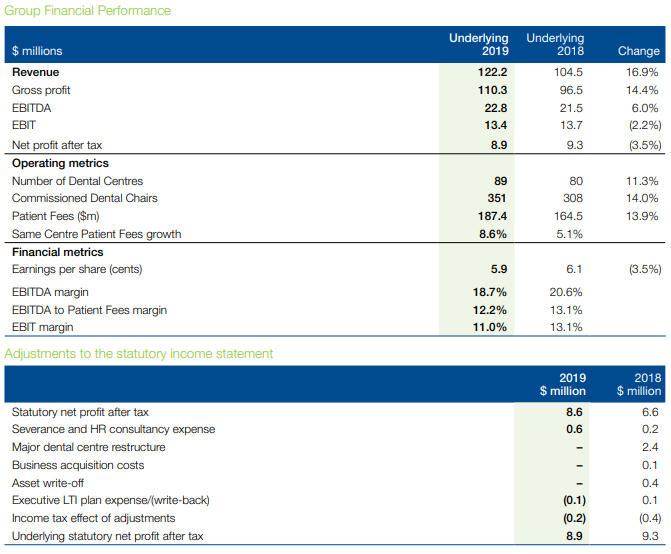 An Australian based company SDI Limited (ASX: SDI) was listed on the Australian Securities Exchange (ASX) in 1985 and is engaged in manufacturing of specialised dental materials. The company has strong research and development, and its products are distributed worldwide across 100 countries. SDI has its offices and warehouses in the US, Germany and Brazil. All the dental products of the company are manufactured in Victoria, Australia.

According to an ASX announcement, the company generated a notice for its annual general meeting (AGM) which would be on 15 November 2019 at Victoria, Australia.

According to another ASX announcement on 30 September 2019, the company revised its shareholder information which was included in its annual report and attached a correction to the distribution of equitable securities.