Cyclical stocks are believed to be a vital element of oneâs stock-trading arsenal, as they are reliable profit generators in a value investorâs portfolio. As suggested from the term, âcycleâ is an important word to break down while understanding cyclical stocks.

The Global Scenario with Cyclical Stocks

The current times are hovered over by economic uncertainty, mainly driven by the protracted trade war between two of the biggest economies of the world adversely impacting trade relations across the border. As the worldâs economy continues to slow down, amid the ongoing fear of a recession, several questions arise pertaining to the best possible ways to invest. In Australia, the economic outlook, as per industry experts, has tanked of late.

Considering the fact that cyclical stocks strictly follow economic cycles, they are often regarded as a safe bet.

Let us browse through a few examples of cyclical stocks, listed and trading on the Australian Securities Exchange, their stock performances and YTD return (as on 15 November 2019):

What Are Cyclical Stocks?

The equity securities whose price are impacted by the macroeconomic events and systematic changes in the overall economy are referred to as cyclical stocks. These stocks follow âcyclesâ of the economy- expansion, peak, recession and recovery.

Ideally, the cyclical stocks (often referred to as offensive stocks) pertain to companies that deal with discretionary items (purchased more in the boom cycle). They also pertain to companies wherein customers cease to spend and cut back their expenditure during a recession cycle. Having said this, cyclical stocks are investments that follow the up and down trends of the market.

Cyclical stocks have the tendency to rise and fall with the economic cycle, depicting a predictability in their movement to investors who usually buys the shares at a low point in the business cycle and sells them at a high point. It should be further noted that:

Investors use cyclical and non-cyclical stocks to diversify their stock portfolio. Let us understand the difference between these contrasting, yet famous stocks: 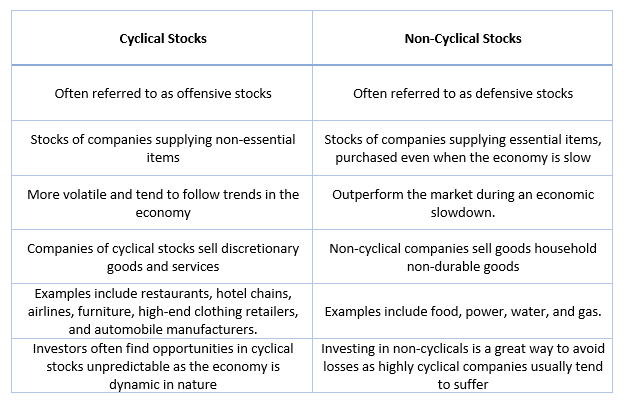 Should You Invest in Cyclical Stocks for Profit?

It is globally believed and accepted that there are two reasons to own an investment- to secure the present-day income and safeguard the future income. Synonymous to income and capital growth, investors are always on a look-out to diversify their stock portfolio to satisfy these reasons.

Market experts believe that investors should own cyclical stocks for yield as they are critical to a modern economy. Even though they are unpredictable and considered highly volatile, it should be understood that periods of consistency and predictability are only temporary.

Therefore, if tapped at the right price, cyclical stocks make attractive long-term investments. Moreover, one cannot ignore the fact that several cyclical industries tend to provide goods and services that the economy consumes on a daily basis, like commodities (metals and mining).

Where to Find Cyclical Stocks On ASX?

Cyclical stocks are categorised under this sector as shares in the consumer discretionary companies face the highest risk of decline in cycles of wider economic downturns, though they tend to bounce back (and bounce back well!) when the economy stabilises.

Letâs move ahead from the consumer discretionary section to Banks. The Australian share market is heavily influenced by the performance of its listed banks, which have remained to be among the top products of the economy.

Interestingly, banks are very cyclical in nature, as they make money by borrowing and lending and during the tough times, there is reduced ability to fund borrowings, and consequently, the bank lending falls away. Bankruptcies amid borrowers in this cycle is a common phenomenon.

Another classic sector example to tap is the material sector, whose products and services are very dependent on the level of economic activity in the economy.

As investors, one needs to keep an open eye and vigilant mind on all sectors that have the potential to deliver good returns in the short and long run. The fact that an economy goes through its natural cycles of expansion and contraction stands true, and this heavily impacts the stock market at a micro and macro level.

The trick of the trade town should essentially be to recognise the cycle being followed and anticipated (if foreseeable) and weigh oneâs portfolio in accordance to the same.

Now that we understand the stance of cyclical stocks on the ASX, we leave you with this fact- A wide section of experts believe that all stocks are to some extent cyclical, but some are far more so than others.