The Australian consumer confidence recorded a dip of 0.6% to 100.7 in June 2019, according to the Westpac-Melbourne Institute Consumer Sentiment Index released on 12th June 2019. Though the index is above 100, the point mark which represents the breakeven point between optimism from pessimism, but it is below 101.3 reported in May 2019.

The index, released on 12th June 2019, is based on a survey of 1,200 adults aged 18 years and above, who responded to phone interviews during 3rd June-7th June 2019. Interviews were related to the cash rate cut announced by the Reserve Bank of Australia on 4th June and GDP figure announcement on 5th June.

The consumer confidence dipped, over concerns about general economic outlook, including employment opportunities after GDP data revealed the weakest annual expansion in a decade. The drop highlights how consumer mood deteriorated owing to concerns about the economy, outweighing the boost experienced following the cut in official interest rates announced by RBA. 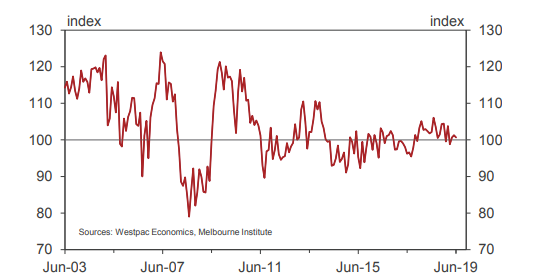 For the week ended 8th June 2019, the index dipped by 2% week-on-week. The index representing the consumer confidence in the Australian economy primarily attributed the drop to weak GDP growth during Q1 ended March 2019.

The index for current financial conditions and future finances reported a decline of 2.7% and 2.2% during the last week. While the only respite was in the consumer sentiment towards ‘the time to purchase a household item’, which recorded a 4.9% rise. The survey involved face-to-face interviews of around 1,000 people across Australia. 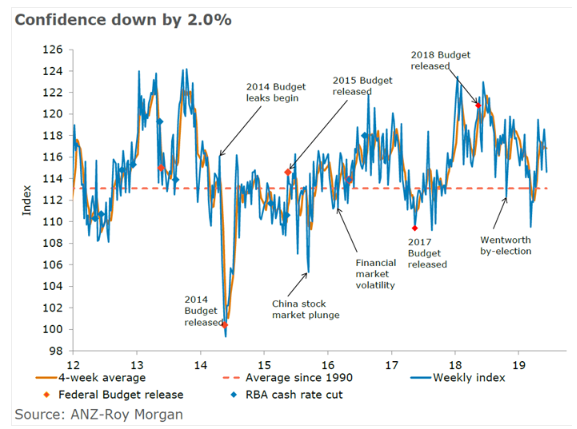 Australia economy grew by 0.4% in Q1CY19; the growth was the slowest since the quarter ended in September 2009. The slowdown highlights the need for monetary and fiscal initiatives to support from the economy from slipping into recession after an expansion for straight 28 years. The March quarter GDP growth rate is below 0.5% increase expected during the period.

On 4th June 2019, the Reserve Bank of Australia lowered interest rates by 25 basis points to 1.25%, representing the first rate cut in nearly three years. The move is aimed at dealing with the effects of global trade tensions and a slowdown in the Asian country, China. With the rate cut, RBA aims at reducing unemployment and achieving sustainable economic growth and inflation target. Next meeting of the Reserve Bank Board is scheduled on 2nd July 2019.

A Brief on Westpac–Melbourne Institute Survey of Consumer Sentiment:

Westpac: Westpac Banking Corporation (ASX: WBC) is one of the big four banking corporations in Australia. It is also the oldest bank in the country and one of the largest financial service providers in New Zealand. The bank, via its a range of financial service brands and businesses, caters to personal, business or corporate banking needs. Founded in 1817, the bank is headquartered at Sydney, Australia.

Melbourne Institute of Applied Economic and Social Research: Located in Victoria, Australia and established in 1962, Melbourne Institute is an economic research-based institution, which measures a variety of macroeconomic indicators, including economic growth drivers and consumer sentiments towards economic outlook. It is engaged in developing research tools, serving government, business and community groups. The institute is well-known for its economic and social indicator measurements, in addition to HILDA and MABEL Surveys.

Westpac–Melbourne Institute Index of Consumer Sentiment: This is a monthly survey of consumer confidence in Australia. It gathers and then measures consumer sentiments towards the overall economy of the country. The index is based on below mentioned five indices: