Uranium Application: Uranium has good use as fuel in nuclear reactors to generate power (electricity). It contributes around 14% of the worldâs electricity. Through the production of radio-isotopes Uranium has found its usage in Medicine (diagnosis & research), Food processing industry (sterilize fresh products), Industrial sector (industrial X-ray requirements), Space industry, and History & culture (carbon-14 technique). It is a good alternative to the traditional source of energy such as coal, where 1 kilogram (kg) of natural uranium can produce heat as equivalent to 20 tonnes of coal.

Resources Availability: Uranium is present in around 200 different minerals, mostly prevalent in granite and sedimentary rocks. The element is also found in the seawater, wherein, the current data for seawater is estimated to contain an average of 0.003 parts per million (ppm). The Earthâs crust is also estimated to contain the element in the range of 1-4 ppm.

Uranium Outlook: Demand for the uranium is expected to increase due to a decrease in dependence on traditional sources, and less than expected power harness from the renewable sources. Till now, the USA, Russia, Japan, China, and France have been the major consumers of the uranium. The global demand for uranium witnessed a heavy-foothold by the year 2007, and since the Fukushima accident in 2011, the need for nuclear-based power solutions slumped drastically taking the Uranium price to its lifetime low.

In view of weak demand, major uranium producing country such as Kazakhstan reduced the production. At present, the Uranium is again gaining its ground with rising demand for Nuclear reactors in countries such as India, France, China, etc. The global uranium stockpiles are expected to deplete soon, therefore in order to meet the growing uranium demand, various companies around the globe are tightening their belt. With this scenario, the global uranium prices can be expected to bottom out, and a new fresh upside rally may be seen in the coming years.

Letâs see how the stocks of these companies have been performing based on their recent updates.

Uranium producer, Paladin Energy Ltd (ASX: PDN) recently announced the appointment of Ms Anna Sudlow as a new CEO, effective July 1, 2019. Ms Sudlow will replace Mr Craig Barnes, who will be with the company till September 30, 2019, and help in the successful transitioning process.

On April 23, 2019, PDN notified the market that it was ending market speculation over capital raising.

Producer of Uranium oxide, Energy Resources of Australia Limited (ASX: ERA) recently provided additional information in relation to the tailings (construction, management and monitoring) facilities at its Ranger mine.

The information will be subject to three levels of governance, where ERA will provide the first level of assurance, with the important points being effective facility design, regular reviews, and comprehensive operational controls. Rio Tinto Limited (ASX: RIO) through its periodic business technical reviews and conformance audits would be providing the second level of assurance. The third party would provide a third level of assurance.

Q1FY19 Key Highlights: ERA produced 526 tonnes of uranium oxide (oxidised-U3O8), in the March'19 quarter compared to 613 tonnes in the December'18 quarter, majorly due to the lower ore milled because of wet season conditions and additional maintenance activities, during the period. Production guidance for 2019 of between 1.4 K to 1.8 K tonnes of uranium oxide remains unchanged.

In another update, BKY had announced exploration licences granted to it, which will be crucial for the companyâs prospective for battery and EV metals. In the municipal election in Retortillo, the village close to the Salamanca project, Four out of five council seats were won by candidates who were supportive of the Companyâs project. 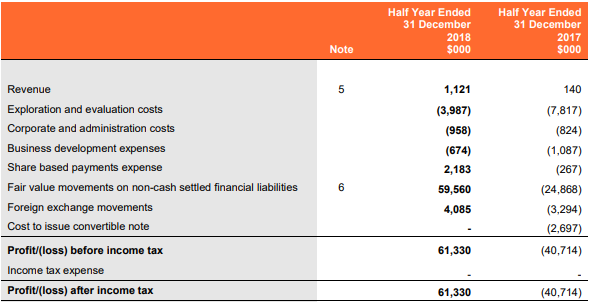 On January 23, 2019, the company notified that it had received favourable assessments.