As per the announcements on ASX, all the six stocks have released updates on changes in directorsâ interest, appointment/resignation/retirement from the Board and changes in the shareholding.

Let us now have a detailed look at the updates for each of the stocks:

The company recently released updates on the change in few of the MFGâs directorsâ interest, effective 29 July 2019.

Shareholding: The company also updated that it became a substantial shareholder for Spark Infrastructure Group, on 29 July 2019 with 5% of the voting power.

During the first half period ended 31 December 2018, the company reported adjusted revenue amounting to $276.4 million, up 41% on pcp. Net profit after tax for the period stood at $173.5 million, up 225% on prior corresponding period.

Rural Funds Group (ASX: RFF) is involved with leasing of properties and equipment related to agriculture.

Change in Directorâs Interest: The company recently updated that Michael Carroll, one of the Directors, on 31 July 2019 acquired 317 ordinary units under the Distribution Reinvestment Plan and currently holds a total of 27,940 units.

1HFY19 Highlights: During the six months period ended 31 December 2018, the company reported property revenue amounting to $30.70 million, up 27% in comparison to pcp revenue of $24.14 million. Adjusted funds from operations per unit, stood at 6.4 cents as compared to 6.0 cents in prior corresponding period. AFFO per unit is forecasted to be higher in the second half of the year owing to additional property revenue from acquisitions and lower expenses.

Non-executive Directorâs appointed: The company recently updated that Dr Rosalind Wilson has been appointed as a Non-Executive Director on 1 August 2019. The non-executive director holds more than two decades of experience in leading international pharmaceutical companies and smaller bio-techs. Most recently, she was the CEO of Factor Therapeutics (ASX: FTT).

Shareholding: In another announcement dated 29 July 2019, the company updated that CityCastle Pty Ltd ceased to be a substantial shareholder, with a reduction in percentage holding from 5.31% to 3.68%. Earlier in July 2019, UBS Group AG became a substantial shareholder with 5.12% of the voting power. The company had also updated on the change in shareholding of Yuuwa Capital LP and Platinum Investment Management Limited on 3 July 2019. Yuuwaâs voting power reduced from 39.40% to 32.90%. While, Platinum Investmentâs voting power reduced from 9.81% to 8.52%.

The company has proposed to raise funds through placement and offers, with the aim to utilise the funds for manufacturing of AD-214, pre-clinical studies and phase 1 trial of AD-214 and other general purposes.

Use of Funds (Source: Companyâs Prospectus)

2HFY19 Highlights: Further, on 31 July 2019, JHG released 2Q19 results for the six months period ended 30 June 2019, wherein the company reported Assets Under Management amounting to US$359.8 million, reflecting the impact of stronger markets partially offset by net outflows during the quarter. Adjusted diluted EPS for the period stood at US$0.61. During the period, the company declared per share dividend of US$0.36. 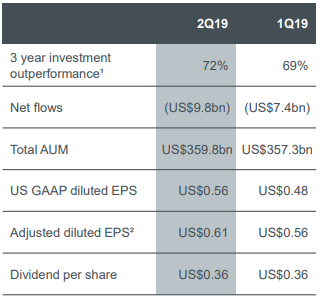 Kathmandu Holdings Limited (ASX: KMD) is into designing, marketing and retailing of apparel and equipment for outdoor and more.

Directorsâ Retirement/Appointment: The Board of the company recently, on 1 August 2019 appointed Andrea Martens as an independent director of Kathmandu Holdings. Also, Sandra McPhee would retire as a Director on the Board during September 2019.

Shareholding: The company notified the exchange that Accident Compensation Corporation became a substantial shareholder with 5.029% of holding.

Board Changes: Shane Francis Tanner stepped down from the position of Chairman from 31 July 2019, after serving a tenure of 10 years. The company recently updated that Bernard Joseph Brookes will move in as the new Chairman from 01 August 2019, with ratification of appointment by the shareholders on 18 November 2019. David Jackson was appointed as the new CEO of the company from 02 May 2019.

Financial Update: On 31 March 2019, the company announced its financial results for the six months ended 31 January 2019. During the period, the company generated revenue amounting to $16.1 million. EBITDA loss during the period was reported at $0.8 million. Net profit after tax for the six months stood at $14.3 million, majorly driven by NAB bank restructure in September 2018.

Outlook: The company expects revenues and margins during the second half to be lower than the original expectation due to delays in initiatives such as floral beads launch, toy story 4 launch, re-launch of new Pillow Pets range etc. The initiative, earlier planned for 2HFY19, have now been delayed until the first half of FY20. Therefore, the company is expecting to remain in operating losses in the second half of the year.