While enduring sadness because the world is in disarray of late, had it not been for accelerated technology services, we would have been looking at a fractious situation.

In the wake of coronavirus induced lockdown and social distancing norms, technology played a pivotal role in keeping our society and businesses functional.

The last couple of months have noted a surge in demand for technology in every sphere of life, ranging from e-learning applications to digital payment technologies. Further, several technology stocks have performed fairly well, with rising customer base leading to a sizable increase in their top lines.

S&P/ASX 200 Information Technology (Sector) (ASX:XIJ) closed at 1455.5 points, down by 1.6% from its last close, as on 15 June 2020. The index is recovering, albeit with a couple of hiccups; bolstering positive outlook for the investors.

Let us now apprise ourselves with some of the buzzing technology stocks on the ASX.

Zip Co Limited (ASX:Z1P) is a leading Australian provider of point-of-sale and digital payment services to various merchants and consumers across multiple sectors such as health, retail, education and travel.

Z1P is embracing the increasing demand for Buy Now Pay Later (BNPL) solutions and is growing with robust financial and COVID-19 proof performance.

Recently, Z1P noted strong performance during May and reported revenue of AU$15.6 million, an increase of 78 per cent for May in comparison with the previous corresponding period.

Z1P witnessed a substantial increment of 63 per cent y-o-y in its monthly transaction volume to AU$189.3 million. Further, Z1P experienced an addition of about 65,000 new customers in May, while the total customers reached 2.1 million.

An upsurge of 85 per cent y-o-y was noted in Z1P’s receivables balance, which stood at AU$1.2 billion at the end of May. 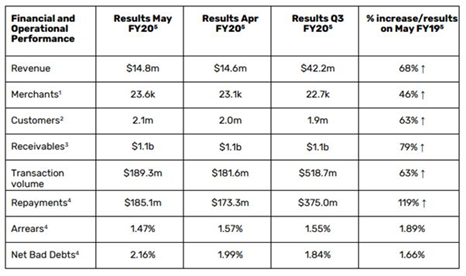 Lately, on 9 June 2020, Z1P announced its partnership with Neobank 86 400 to assist the users in tracking their transactions, along with balances post linkage of their Z1P account to the banking application.

Interestingly, Z1P Shares witnessed a jump of 15.78% in its share price on 9 June 2020 followed by the partnership announcement.

Of late, Z1P acquired a US-BNPL, QuadPay to accelerate its expansion in the US market.

The BNPL pioneer company APT, recently during may 2020, announced that it had over five million active shoppers in the US, illustrating a strong foothold in market.

APT’s services are being offered by over 15,000 retailers and brands to its customers helping it to reach ~9 million US customers inclusive of above 1 million new customers who joined the platform during COVID-19 crisis period. Of late, Tencent Holdings Limited became a substantial holder with a 5% stake in APT.

Furthermore, APT recently notified the market with the changes in the Board members:

Did you read; Significant Changes in ASX200 Stock Reshuffle

A provider of high-quality training data which is used for machine learning and Artificial Intelligence (AI), APX has a robust balance sheet with over AU$100 million cash resources, as notified in April this year.

The fact that AI is barging higher during the crisis period and is believed to be worth AU$22.17 trillion to the world economy by 2030 as per CSIRO, it is anticipated that going forth, APX will emerge stronger.

Of late in its AGM presentation, released on 29 May, APX reiterated its guidance for FY 2020. APX YTD revenue plus orders in hand for delivery stood at approximately AU$350 million at May 2020. The Company’s EBITDA for the year ending 31 December 2020 is likely to be between AU$125 million and AU$130 million.