Damien, a sweet name I have a friend by, is actually the name of the category 3 Cyclone system, which is expected to hit the Pilbara coast this weekend. Heavy rains have already been registered by the regional meteorological department, with strong winds up to 137 kilometres an hour, a speed you would expect from a superbike to cruise at on a freeway. 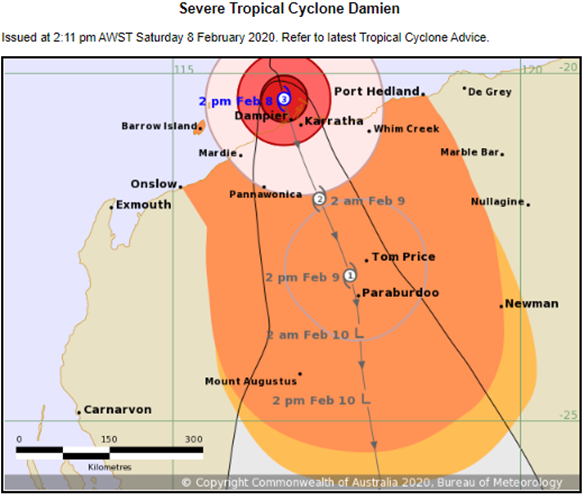 The Forecast for Damien Source: Bureau of Meteorology Australia

Residents in the north of Western Australia are being warned to expect strong winds and heavy rain as the cyclone forms off the coast. Tropical cyclone Damien is expected to grow into a cat-3 system by the time it makes landfall in the weekend.

In Karratha, a town in the firing line from the storm, the residents bought food items and items of daily use in bulk as cyclone Damien tracks towards the Pilbara.

Tropical cyclone Damien is expected to make it to the Lanfold on Saturday and is expected to pack a punch and bring in winds at up to 250 kilometres an hour, as early as Friday.

The local government authorities have asked the residents to get rid of loose items from the house and prepare for up to 4 days. The inhabitants are also advised to keep up to date with the latest cyclone warnings.

The cyclone is expected to be Australia's third cyclone to develop offshore this season, but it could also be the first system to strike the coast this year.

The mining giants gear up for the upcoming tropical cyclone Damien. The intensity of Damien had earlier been upgraded on Thursday, to a category 4 system, the devastation by the cyclone would freshen the memories of the mining players and residents in the area.

The Cyclone is expected to hit the Pilbara coast in the region between Port Headland and Mardie which covers multiple mining seaports and mining operations.

Rio Tinto owns 16 integrated mines and operations in the Pilbara region with the Mesa A mine expected to face the head-on impact of Damien during the weekend. The Pilbara region is home to one of the most mineral-rich and mining-friendly regions especially for iron ore, not only in Australia but throughout the world. The actual impact of the Damien cyclone might put a few mining operations on hold for a longer period of times, bringing the actual capital lost to a million of dollars.

Dampier, the iron ore port of Western Australia was closed on Friday thanks to Damien, while Port Hedland 250 kilometres started removing vessels off the dock.

The iron ore from the Pilbara region, the highest contributor in Iron ore production in Australia, are shipped primarily from 3 ports namely, Port Hedland, Dampier and Cape Lambert. Dampier & Cape Lambert are solely used by Rio, and Port Hedland is used by, Fortescue Atlas Iron and BHP.

The threat to the iron ore industry may delay shipments during the primary season of restocking of iron ore on Chinese ports with the start of the new year.

Damien, expected to the biggest cyclone in the region for the season might flood the mine site and railways used to transport the iron ores from the mine sites to the ports, tanking the production by million tonnes. We would keep you updated on the estimated & actual losses to be born by the government and mining bigwigs.

If the operations at Rio Tinto Pilbara mines are hampered, an estimate of 1 million tonnes a day of Iron ore would be wiped off from the iron ore supply, putting global pressure on the global iron ore industry and may inflate the iron ore prices in the near term. In case of flooding of the mines or ancillary facilities, the duration of suspension of the operations may run even longer.

The BHP Iron ore operations located in the Pilbara region of Western Australia consists of 5 mega-mining sites integrated to the 4 processing plants by a 1,000 kilometres of rail infrastructure.

The company owns a series of mines and processing hubs in Solomon & Chichester hub in the Pilbara region and are developing even more projects in Western hub & Iron bridge regions.

FMG has upgraded its production guidance-

The Coronavirus has already hit the steelmaking industry hard, and the Cyclone Damien & its successive events of huge rains might do worse for the iron ore industry. The Iron ore miners are taking precautionary actions to ensure that the Veronica story of last year’s is not repeated.