Australia is amongst the world’s strongest performing economies. It completed 28 years of continuous economic growth on a yearly basis in 2018/2019, with trade playing a major part in the continued economic success. During the last few years, trade accounted for more than 25 per cent of Australia’s economic growth.

Two-way trade in goods and services of Australia grew to a new record high of $798.6 billion in 2017?18 period, representing an increase of 8.4 per cent from $ 736.6 billion reported during the same period a year ago. 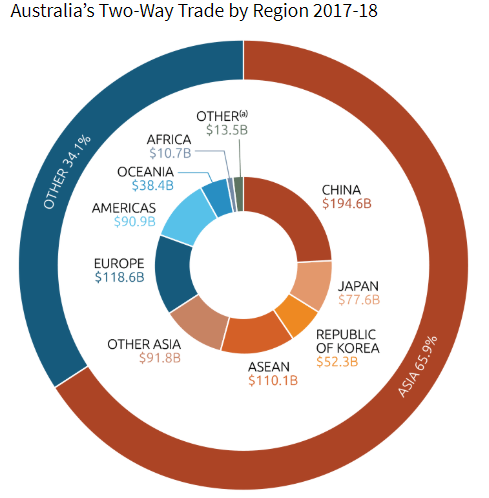 The Australian trade emphasis has shifted majorly to the Asian region in recent years, with four of the top five trading partners of the country being China, Japan, Republic of Korea and India. Also, United States is the third largest trading partner of Australia.

Below graph depicts Australia’s two-way trade in goods and services with its top 15 trading partners. 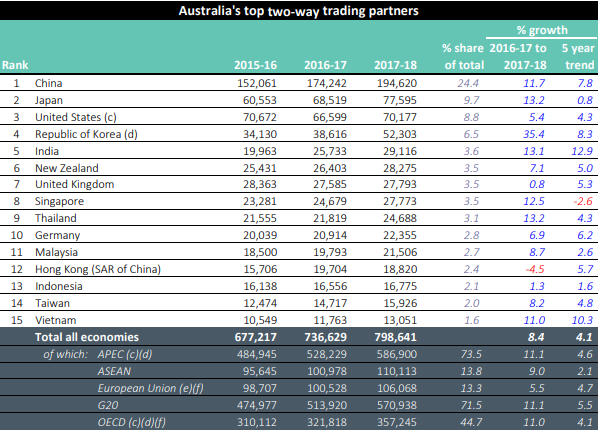 Globally, Australia has developed a competitive edge in products and services offered. Some of its top trading products are high-technology products like medical and scientific equipment and high-quality wine and processed food. Education, tourism, and professional and financial services are among the major services being exported.

The top five goods and services that were exported during the period of 2017-18 were iron ore & concentrates, coal, education-related travel services, natural gas and personal travel, accounting for $61.4 billion, $60.4 billion, $32.4 billion, $30.9 billion and $21.6 billion, respectively. More than 90 per cent of metallurgical coal and iron ore produced in the country are exported.

Australia is considered a leader in the global mining industry, as it is one of the largest gold, nickel, bauxite, and iron and zinc ore producers and major coal, natural gas and uranium suppliers. 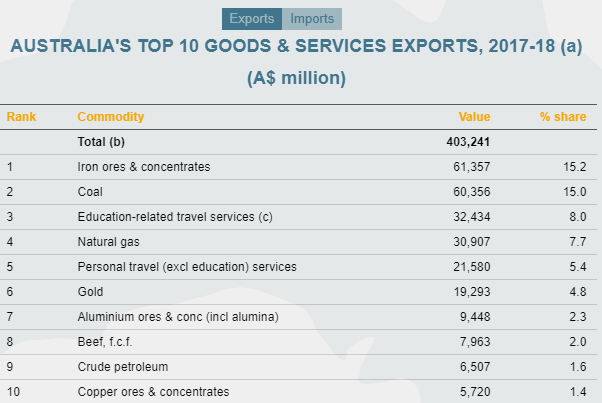 Australia entered its first free-trade agreement (FTA) with New Zealand in 1983. Since then 9 FTAs have been signed, with Singapore, Thailand, Malaysia, Japan, China, Chile, United States, Malaysia and Korea, respectively. Of the total two-way trade of Australia, FTAs account for 67 per cent. The country is currently in talks regarding six more FTAs. FTAs have substantially lowered costs for Australia-based exporters, as well as facilitated their products’ and services’ trading in the international markets.

If the current negotiations regarding the six FTAs would lead to positive outcome, the share of Australia’s FTAs of the total trade would grow to 88 per cent from the current level of around 70 per cent. With these free trade agreements, Australia intends to boost trade and investment flows.

In the month of January 2019, Australia joined 75 other members of the World Trade Organization (WTO) in initiating talks on the trade-related aspects of e-commerce. E-commerce and digital trade is the use of internet in goods and services trading and covers the information and data transmission related to trade across borders.

Australia is leading the WTO negotiations on e-commerce, as it is one of the important areas of interest among Australia as well as global businesses, owing to the scope of immense opportunities. Businesses have interest in transactions through digital trade and electronic systems, which would result in transparency, single window, paperless trading, e-signatures and other benefits. Moreover, the new updates would mean online consumer protection, personal information/privacy protection, etc.

Australia backs a rules-based and open environment for trading in the global market, facilitating trade digitalisation and lowering barriers for digital trade as well as building faith and confidence in the online environment.

Since 2018, the United States and China, the two largest economies of the world, have imposed tariffs worth hundreds of billions of dollars on each other’s imports, resulting in the start of the largest trade war in the global economic history till date.

The ongoing trade dispute between the United States and China could hurt Australia, as these two economic powerhouses are among Australia’s top trading partners. If the trade war escalates further, Australia could suffer, as it is majorly an export-based economy. Any change in the policy that impact the markets where Australia is trading could result in a major impact on its economy.

In 2018, China was the top trading partner of Australia. The figure below depicts the trade relationship between China and Australia.

At the same time, Australia and the United States have a strong two-way investment and trade relationship.

Australia is the only country in the world that has continued to maintain an uninterrupted economic growth for 28 years. Trade is expected to remain a major contributor towards delivering solid economic performance in the coming years as well.