The Australian healthcare sector has been witnessing rapid advancements and innovations. Besides, healthcare is performing well in multiple State Budgets as well as the Federal Budget as announced earlier in 2018. Thus, the healthcare industry can expect injections of billions of dollars in the coming months to further progress with the designing, development and modernisation of the sector.

Also, 2018 was a revolutionary year for the whole world with impressive developments in robotics, the wide adaption of Artificial Intelligence, Augmented and Virtual Reality, and wearable devices providing new health care opportunities, especially for the aging population and differently abled people.

On 21 June 2019, the company provided an update on its FY20 transition to own distributor model in China. As a backdrop, CSL announced in its half-year results that it would transition to its own Good Supply Practice (GSP) License in the Asian country in the financial year 2020 (FY20), with the license legalising the owning and selling of products in the Chinese market. For the stakeholders to understand this change clearly, the company provided an estimate of the ‘one-off’ financial impacts for the Group on FY20.

The expectations for the key financial line items include lower reported albumin sales of approximately $ 340 - $ 370 million, profit effect in line with historical CSL Behring margins and a more modest impact on cash flow as the company continues to collect outstanding receivables from existing distributors. In addition, the cash collection cycle will improve under the new model.

Investment in the Future- For over 30 years, CSL has been selling albumin into China and in FY18, CSL’s albumin sales into this market recorded over $ 500 million in revenues.

Currently, albumin is distributed via a third-party and after transitioning to its own GSP distributor, the company’s product sales would be recorded at a later point in the cycle; that is when the product leaves CSL’s own GSP distributor in China. The direct business model is anticipated to improve CSL’s ability to serve its Chinese clients while the license underpins CSL as a Tier 1 distributor, that would entitle it to several new benefits.

Financial results- For the half-year ended 31 December 2018, the company recorded revenues of USD4.5 billion, up 11% on the prior corresponding period. The net profit also improved by 10% to USD1.2 billion.

Cochlear Limited (ASX: COH) is a healthcare sector company based in Sydney, Australia and is engaged in the development, commercialisation and provision of implantable hearing solutions to clients across Americas, Africa, the Middle East, Europe, and the Asia Pacific.

Recently, on 17 June 2019, the company informed the stakeholders that it received the FDA approval for the Nucleus® Profile™ Plus Series cochlear implant. Following the recent approval, the company intends to immediately begin the commercial launch of the product in the United States of America.

Previously in April 2019, the company had announced the launch of the Nucleus® Profile™ Plus Series cochlear implant that had been designed to essentially conduct the regular 1.5 and 3 Tesla magnetic resonance imaging scans without having to remove the internal magnet in the process. The new technology is expected to be first commercially available for sale in Germany and that would be followed by its launch in other countries across Europe in the months to come, as the required regulatory approvals are sought by the company.

Financial Results- In February 2019, Cochlear disclosed its financial results for the half-year (six months) 31 December 2019. The company posted an 11% rise in sales revenue to $ 711.9 million and an 8% increase in revenue and the Earnings Before Interest and Taxes (EBIT) also recorded a 10% improvement to $ 177 million in the first half of the financial year 2019. There was a significant increase of 16% in the net profit for the profit attributable to members to $ 128.6 million. 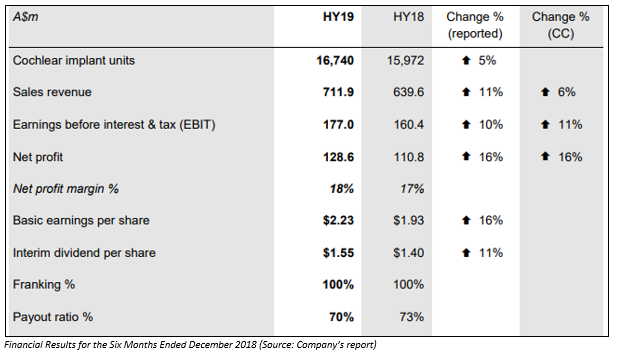 Its sales in the United States experienced a lower rate of growth with a loss of share, owing to the launch of a competitor product. Also, unit sales in Western European markets were impacted due to a combination of factors. However, unit sales in emerging markets registered growth of more than 15%. There was a strong growth in unit sales in Japan, backed by the expansion of indications as well as funding raised during 2017.

In addition, the operating cash flow also improved to $ 164.1 million in the first half ended 31 December 2018. The company has a pipeline of several large long-term investment projects in the coming years.

Ramsay Health Care Limited (ASX: RHC), established in 1964 and based in Sydney, Australia, is engaged in the provision of healthcare services to patients. The services offered include day surgery procedures, complex surgeries, psychiatric care and rehabilitation services. The group operates about 235 hospitals and healthcare & treatment facilities comprising around 25,000 beds. It has operations in Australia, France, Italy, the United Kingdom, Malaysia and Indonesia.

The company also has an annual dividend yield of 2.01%.

On 25 June 2019, Ramsay Health Care pleasingly announced the appointment of Ms. Henrietta Rowe as the Group’s new General Counsel and Company Secretary. Earlier on 27 May 2019, Ramsay’s Finance Director and Chief Financial Officer, Mr Bruce Soden declared his resignation from the role, effective from the second half of the year.

On 25 March 2019, Ramsay Health Care Limited informed the stakeholders that its French subsidiary, Ramsay Générale de Santé (RGdS), had launched a Renounceable Rights Issue (RGdS Rights Issue) worth EUR625 million, as part of its previously announced plans regarding the refinancing of its purchase of Capio AB. 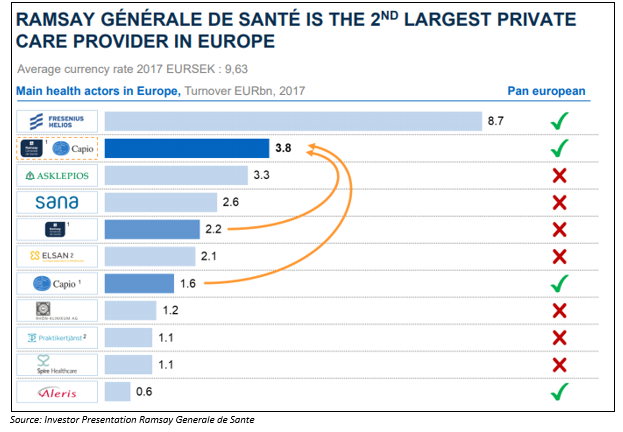 The Group also previously announced that Ramsay and RGdS’ other major shareholder, Prévoyance Dialogue du Crédit Agricole (Predica), all are committed to subscribe for a minimum of EUR550 million in RGdS New Shares. Accordingly, Ramsay would issue new RGdS shares amounting to EUR318.1 million (or 56% of the RGdS Rights Issue subscriptions), and these shares have increased Ramsay’s equity ownership in RGdS from 50.91% to 52.53%.

On 28 February 2019, Ramsay Health Care Limited disclosed its financial results for the six months to 31 December 2019, and recorded revenue and other income of $5.11 billion, up 14.9% on the prior corresponding period (pcp) ended 31 December 2017. In addition, net profit after tax attributable to the members also improved by 9.6% on pcp to $270.1 million.