Australia has one of the best healthcare systems in the world in terms of cost, access, and quality of services and products offered. Globally, health is challenged by demographic and economic changes, threatening a countryâs ability to deliver the level of quality healthcare to which their populations aspire. However, in Australia, there is an extensive R&D and innovations occurring in the healthcare sector which caters to not just the domestic market but the international demand as well. According to a study released by market research firm, Australia has a rising as well as ageing population and its private health insurance services are also improving. These factors are expected to generate strong demand for health services and thereby support revenue growth over the five years through 2018-19.

Letâs look at the three healthcare companies operating in Australia.

In addition, the stock has generated positive return yields of 15.19% for the last six months and 15.40% for YTD.

On 17 June 2019, the company announced that it had received FDA approval for the NucleusÂ® Profileâ ¢ Plus Series cochlear implant and will commence an immediate US launch.

Cochlear had announced the launch of NucleusÂ® Profileâ ¢ Plus Series cochlear implant on 16 April 2019. It has been designed to conduct routine 1.5 and 3 Tesla magnetic resonance imaging scans without the need to remove the internal magnet. The new technology will be first introduced for commercial sale in Germany, followed by commercialisation in other European countries in the upcoming months as Cochlear seeks respective regulatory approvals.

As per the companyâs half-year 2019 results for the six months to 31 December 2018, the business recorded a 11% increase in the sales revenue to $711.9 million and 16% rise in the profits to $ 128.6 million. The highlight was the Services business which grew revenue by 28% (21% in CC), with sound processor upgrade revenue increasing by 26% in CC. In addition, Cochlearâs Acoustics business also recorded a revenue growth of 7% (1% in CC) and the demand continues to gradually grow for the Baha 5 sound processor range of product. 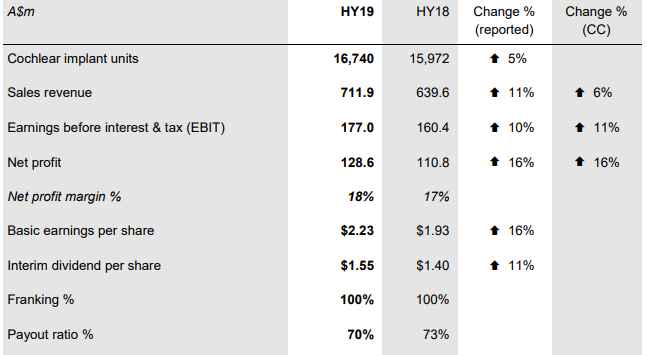 In addition, the companyâs operating cash flow increased by $71.4 million to $164.1 million and the Board declared an interim dividend of $1.55, an increase of 11% on the last year.

World-leading health company ResMed Inc (ASX: RMD) is based in Bella Vista, Australia and engaged in the development, manufacturing and commercialisation of cloud-connected medical devices for supporting diagnosis, treatment and management of chronic obstructive pulmonary disease, sleep apnoea, and other chronic diseases. With a market capitalisation of AUD 24.63 billion and around 1.43 billion outstanding shares, the RMD stock was trading (on 18 June 2019, 3:36 PM AEST) at AUD 17.390, edging up 1.222% by AUD 0.210 with approximately 1,284,148 shares traded.

In April 2019, ResMed released the results for the third quarter of FY2019, reporting another three months of strong top-line revenue growth recorded across all business categories, including a significant contribution from recently acquired SaaS companies and impressive growth in the device sales internationally. There was a 12 percent year-on-year improvement in the revenue to $ 662.2 million, (up 15 percent on a constant currency basis) while the gross margin also extended to 59.2% (by 100bps). There was also a 15% rise in the net operating profit and the non-GAAP operating profit was up 15%. The company posted the GAAP diluted earnings per share of $ 0.73 and the non-GAAP diluted earnings per share of $ 0.89. The results for the 2019 third quarter are depicted in the image below.

CSL Limited (ASX: CSL), established in 1916 and headquartered in Parkville, Australia, is engaged in the research, development, manufacturing, marketing, and distribution of biopharmaceutical and allied products in the United States, Australia, Switzerland, Germany, the United Kingdom, China, and other countries worldwide. The company operates through two segments, CSL Behring and Seqirus. With a market capitalisation of AUD 95.8 billion and around 453.14 million outstanding shares, the CSL stock was trading at AUD 215.545, edging up 1.951% by AUD 4.125 with around 944,606 shares traded on 18 June 2019 (AEST 3: 52 PM).

Recently on 14 May 2019, the company issued around 28, 268 fully paid ordinary shares under the Performance Rights Plan (PRP) upon exercise of Rights and Options granted. The PRP was adopted by the shareholders at the 2003 Annual General Meeting (AGM) and was recently approved at the 2018 AGM.

As per CSLâs half-year results for the six months to 31 December 2018, the revenues from continuing operations increased to USD 4.5 billion (see figure 2), up 8.6% while the net profit after tax for the period attributable to members was up 6.8% to USD 1.2 billion. Besides, the company also launched 5 major products in the last 24 months (see figure 1). 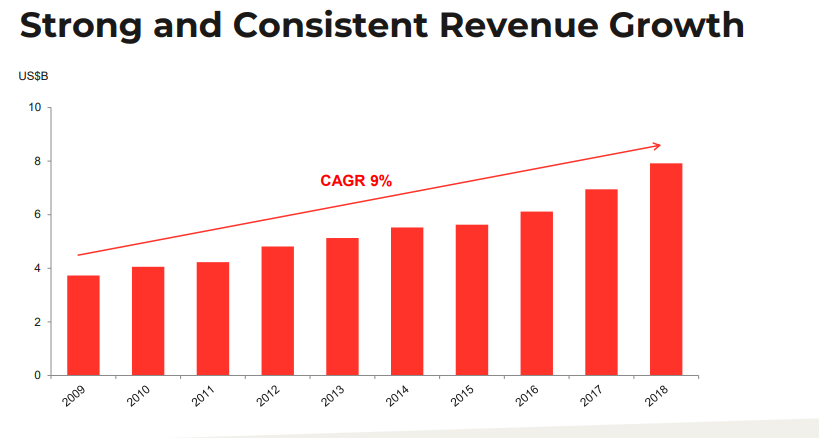 CLICK HERE FOR YOUR FREE REPORT!
Tags:
Blog RMD CSL COH
All pictures are copyright to their respective owner(s).Kalkinemedia.com does not claim ownership of any of the pictures displayed on this website unless stated otherwise. Some of the images used on this website are taken from the web and are believed to be in public domain. We have used reasonable efforts to accredit the source (public domain/CC0 status) to where it was found and indicated it below the image.