In this article, we discuss three financial stocks with updates that were made to market on 14 January 2020. These three companies include a listed investment company, an investment management company and a neo bank.

Mirrabooka Investments has reported the first-half year results for the period ended 31 December 2019. The profit for the period was $4.4 million as against $4.6 million in the previous corresponding period.

Dividends and distributions received were down 8 per cent, which was offset by an increase in net contribution from the trading and options portfolios of $0.6 million, and the taxation was higher due to increased composition of income that was not franked. 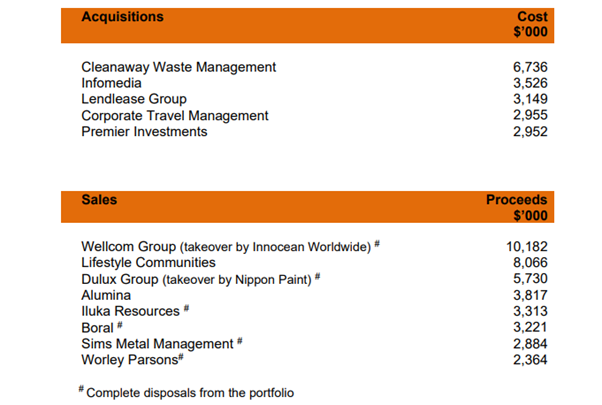 It has announced an interim dividend of 3.5 cents per share fully franked at 30 per cent, and the dividend would be paid on 14 February 2020 to the shareholders in records on 23 January 2020.

Net asset backing per share at the end of the period was $2.54 before deferred tax on the unrealised gains on the long-term investment portfolio, up from $2.21 in the previous corresponding period.

The company noted that the market for small and mid-cap companies remained resilient during the period, which saw many companies maintaining elevated valuations as investors continued to search for growth in a subdued economic environment.

Its portfolio return for the period was 10.2 per cent, including the benefit of franking that outperformed the combined small and mid-cap sector, which was up 5.2% during the same period, including franking.

Wellcom Group and Dulux Group were taken over, and it trimmed the position in Lifestyle Communities Limited (ASX:LIC) as its performance was overly optimistic. Some new additions to the portfolio included Cleanaway Waste Management Limited (ASX:CWY), Infomedia Ltd (ASX:IFM) and Lendlease Group (ASX:LLC).

MIR is of a view that stock prices are higher in the small and mid-cap sector of the market, and the equity valuations are factoring significant growth with little allowances for the execution challenges that smaller business face.

The company is focused on quality of investments that it is holding irrespective of the potential direction of the market, and it is intended to reduce the risks of the capital losses that are seen in the lower quality businesses. Also, it would allow the company to increase investment in companies that it owns and know well amid a broader market correction.

PDL said that higher markets had favourably impacted the funds under management, which witnessed MSCI All Countries World Index increasing by 7.4 per cent over the period.

Meanwhile, the group recorded net outflows of $1.3 billion, representing an improvement over the previous two quarters. And, the annualised impact of the quarterly net outflows on PDL fee income is a decrease of $8.9 million.

The group’s Australian funds under management were broadly flat during the period backed by strong investment performance, which enabled to offset net outflows of around $500 million.

It was noted that there had been consistent positive flow momentum into cash and fixed income strategies through institutional and wholesale channels with outflows recorded in equity strategies.

According to the release, the funds under management for the business increased by $1.1 billion backed by resilient performance that was offset from net outflows and adverse currency movements.

And, the net outflows were majorly from the OEICS as investors continued to move away from European equities (outflow of $800 million). However, the business recorded positive flows into the UK equities (inflow of $300 million), following the potential resolution on Brexit.

The performance fee revenue from the business for the year ended 31 December 2019 was approximately $0.6 million, which would contribute to around $0.2 million to the group’s cash net profit after tax for the financial year ending 30 September 2020.

On 14 January 2020, the company responded to an ASX aware query about a request of information after the release of an announcement made by WZR on 13 January 2020. 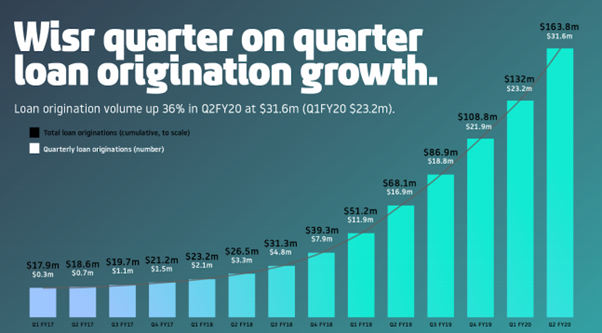 Further, it was mentioned that starting from January 2020, there has been consistent increase in the share price of Wisr, and the company notes that a favourable article was published on the livewiremarkets on January 2. In that article, the company was ‘top pick for 2020’ by a representative of Eley Griffiths.

The company said that the information would have been disclosed in the quarterly reporting. However, the company’s Board discussed the plans of corporate activity and fundraising intentions on 10 January 2020 and decided to verify the loan origination data before progressing any corporate activity.

Further, the H1FY20 originations of $54.9 million witnessed a 90 per cent increase compared to the previous corresponding period, and an increase of 35 per cent on sequential terms. The new funding facility was operational in the during the quarter, equating to tripling of average margin compared to previous loan unit economics.

WZR last traded at $0.235 on 13 January 2020. As per its update on 14 January 2020, WZR securities would be placed under trading halt pending its update regarding a placement, until the earlier of the beginning of normal trading session on 16 January 2020, or when it notifies the market.