Lately, the Australian Bureau of Statistics published figures for Australian GDP, which contracted by 0.3% (seasonally adjusted) in the quarter of March 2020 amid the lockdown caused by COVID-19.

Also, RBA Governor Philip Lowe commented that the economy of Australia was witnessing the biggest economic contraction since the 1930s. He further added that downturn’s depth will be less than what was expected earlier, followed by an unchanged cash rate at 0.25%. The news was followed by the revival of the AUD wherein one AUD was buying 69.37 US cents (as on 3 June). However, on 4 June 2020, the currency has dropped, and one AUD was buying 69.01 US cents (at AEST 2:49 PM).

On the given backdrop, let us now look at some of the hot stocks listed on ASX.

One of the BNPL stocks that has seen a boost in contactless payment space during this period is Afterpay Limited (ASX:APT).

During the current times, social distancing is the mantra to stay safe. There has been a paradigm shift in the payment patterns as both the businesses and individuals have switched their payment preferences and mode of interaction. They have moved on from cash-based transactions to cashless payment methods such as tap cards, cryptocurrency, buy now pay later (BNPL), PayID and payment via smartphones. 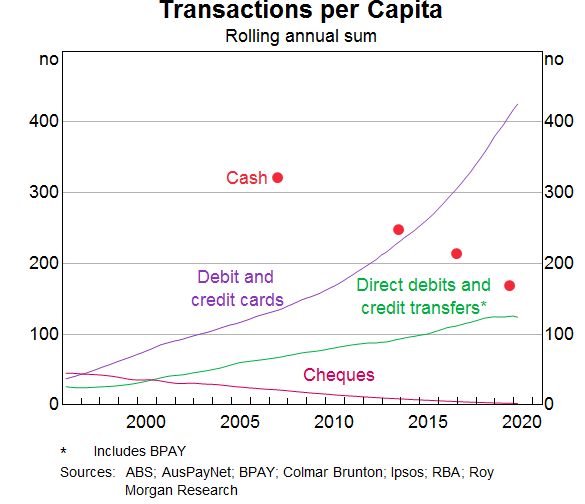 APT witnessed a strong business performance during the quarter ending 31 March 2020 (Q3 FY2020), and as per the Company’s announcement on 21 May 2020, Afterpay had crossed 5 million active customers in the US, while ~9 million people joined the platform. The US market performance remained strong in Q3 FY20 despite the seasonally softer retail market. 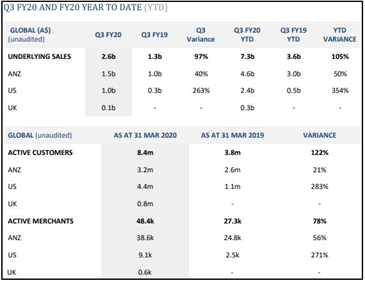 APT’s competitor, Zip Co Limited (ASX:Z1P) is entering into the US market with acquisition of the US-BNPL, QuadPay (New York based entity). Also, Z1P raised up to US$ 200 million as a growth driver to add competition while accelerating its adoption by consumers and merchants. 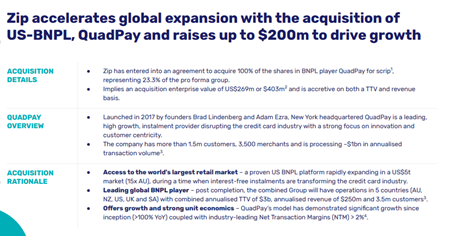 Iron ore is one of the commodities that has witnessed a strong rally across the globe amid COVID-19. Brazil and Australia are the largest iron ore suppliers to China and Brazil saw bad weather conditions causing damage to transportation and production side of the iron ore supply chain.

There has been a lag in the supply chain along with the fall in steel inventory across China. However, the price of steel got better both in the nation and global market, and is now persuading the steel mills in Chinese region to buy iron ore, further adding to the vigorous demand for it.

Fortescue Metals Group Ltd (ASX:FMG) had a booming demand for the products at the end of 31 March 2020 (Q3 FY20) with average revenue of US$ 73/dry metric tonne. Also, the overall shipment stood at 42.3 million tonnes with a hit of 9% against the previous quarter.

FMG upgraded FY2020 guidance for shipments between 175-177 million tonnes. Also, total capital expenditure guidance for FY20 is now revised to US$2.0 - US$2.2 billion from US$ 2.4 million, which reflects the expected timing of cash outflows on growth projects.

Also, a rise in the (realised price) for iron ore boosted FMG’s financial position along with the updated guidance, support the market sentiment around it.

Mineral Resources Limited (ASX:MIN) is an Australian mining infrastructure services provider and into the integrated supply of goods and services, operating in the segments such as mining, mineral services and processing.

Infigen recently published its activity report for the quarter ended 31 March 2020 (Q3 FY20) and reiterated its FY 20 guidance which includes selling of ~1.9TWh of renewable energy generation by the end of FY20. Also, the Company restated that 100% of IFN’s anticipated FY20 LGCs were contracted at an average sales price of AU$ 54 per certificate, Asset Operating Costs of ~ AU$50-55 million and Business Operating Costs of ~AU$25 million. Infigen had consolidated Net Debt of AU$ 454 million and unrestricted cash of AU$140million, as on 31 March 2020.