The wine industry of Australia had a remarkable financial year 2019. As per the FY 2019 figures from Wine Australia, an Australian government authority, the average exports value grew by 16 per cent to $3.74 per litre, the highest since 2008.

The industry across the globe has been hit hard by the coronavirus, and its impact will intensify due to the low income growth, a rise in unemployment and economic uncertainty. The industry is likely to witness a fall in the year ahead with depleting sales via both direct selling and through restaurants and bars. It is estimated that the wine grape production in Australia for 2020 will be around 1.4 million tonnes which is the smallest harvest since 2013–14. The fall in global demand for wine in 2019-20 may lead to slashing the Australian wine exports, thereby impacting the price (as indicated in the chart below). 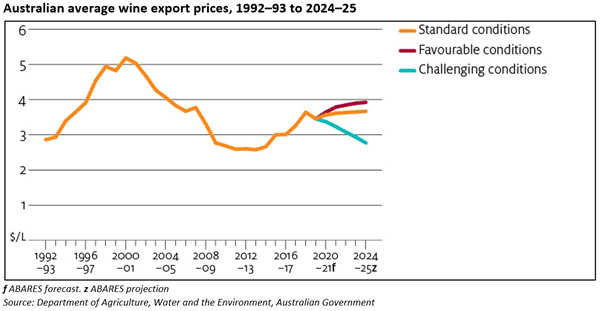 Let’s have a look at one of the wine companies, Treasury Wine Estates Limited and its business performance, potential and the class action lawsuit filed against it.

Founded in 1843, Treasury Wine Estates Limited operates in the international winery business. It offers a portfolio of premium, luxury and commercial wines to its consumers. The Company has around 3500 employees with presence in more than 100 countries including four regions, namely, The Americas, Australia & New Zealand, Asia, and Europe. TWE has diverse brands in its portfolio, including Penfolds, Wolf Blass, 19 Crimes, and Matua, amongst others.

At the start of the new quarter in 2020, a group of proceedings were filed against Treasury Wine in the Supreme Court of Victoria. On behalf of the plaintiff, the law firm Slater + Gordon had filed the proceedings.

It has been alleged that Treasury Wines engaged in misleading or deceptive behaviour. Also, the Company had breached the disclosure obligations continuously to the market.

The shareholders who had acquired the Company’s shares between 14 February 2019 and 28 January 2020 claimed that TWE misled its guidance and should have disclosed about its financial standpoint at an earlier time.

Having said that, Treasury Wine completely denies all of the obligations and plans to defend the proceedings actively.

The share price of the stock dropped from $16.68 to $12.35, a decrease of 26 per cent within a day after the Company disclosed its revised guidance for FY 2020 on 28 January 2020. The revised guidance stated that Treasury Wine expects the reported EBITS growth in the range 5 per cent - 10 per cent in FY 2020.

On 25 February 2020, TWE further updated its earnings expectation for FY 2020. The Company mentioned that it would not be able to achieve its previously declared FY 2020 guidance for the reported EBITS growth.

The key highlights of the financial performance in the first half FY 2020 (period ended 31 December 2019) include:

Despite the challenging situation in the US market, the Company managed to deliver positive results in the first half, as highlighted above. The underperformance in the US is expected to continue in the second half of FY 2020 as well. The prime driving reasons for the same are mentioned below:

Resignation and appointment of CEO

Recently, TWE mentioned about its succession plans for the Company’s CEO and Chief Legal Officer positions, as mentioned below:

Outlook: Treasury Wine holds the potential to strive through the current difficult times. The Company has an advantage of its unique business model and a robust portfolio of brands. TWE is positioned well to take advantage of the long-term opportunities in its operating regions, including the Asia region.

The Company also mentions the following areas to focus on in the future: