Mid-cap stocks are those stocks whose market capitalisation falls between the market capitalisation of large cap stocks and small cap stocks. The good thing about investing in mid-cap stocks is that they are expected to grow and increase profits, productivity and market share, that has positioned them in the middle of the growth curve. An entityâs market cap is subject to 2 components: 1) Its current market price and 2) its number of outstanding shares.

A simple formula for calculating market cap is:

Magellan Financial Group Limited is a funds management company, with the aim of offering international investment funds to institutional investors globally, and retail investors and high net worth in New Zealand and Australia.

The increase in dividend was almost in-line with the 39% increase in PBT for the FUM. The company has a dividend policy of paying dividend amounting to 90-95% of the PAT of the FUM segment. The main reasons behind increase in 39% PAT are:

In the month of August 2019, the company raised $275 million through institutional share placement of 4.98 million shares, which represented ~2.8% of shares outstanding prior.

The funds raised will be primarily used to fund costs that are associated with the IPO of Magellan High Conviction Trust of about $55 million and to support new retirement products which are under development of about $50 million. 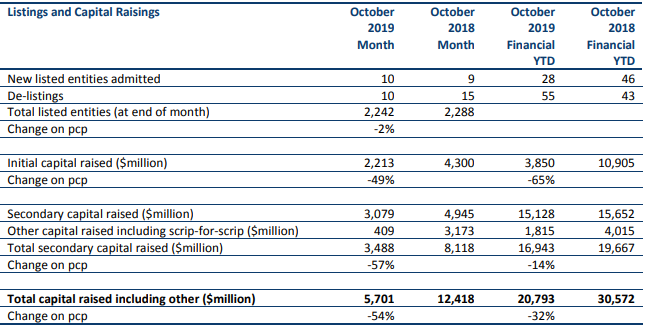 In the month of September, $5.4 billion was raised, which was down by 33% on the pcp and the daily average number of trades was 30% higher than pcp and average value traded on market came at $5.4 billion, which was up by 17% on the pcp.

Medibank has provided additional information regarding its FY20 outlook. Medibank agrees that it has experienced higher than predicted claims, which has increased the underlying claims growth per policy unit from 2.0% reported at the full year vs 2.4% in FY19.

Janus Henderson has released key dates for 4Q19, which are as given below: 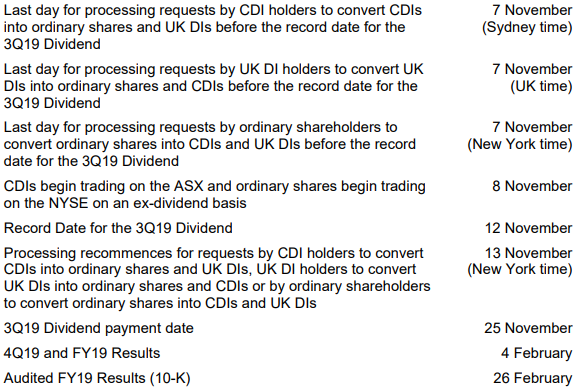 The company reported net income of US$112.1 million in 3Q19 compared to US$109.4 million in 2Q19 and US$111.2 million in 3Q18. AUM was down by 1% to US$356.1 billion, compared to the previous quarter, as a result of net inflows of US$3.5 billion. It also completed share buy backs of US$81 million during the third quarter and US$19 million remains authorised for buybacks in 2019. The company also declared a third quarter dividend of US$0.36 per share.