The Money behind an Oscar campaign

The Academy Award nominations were announced on 13 January 2020, featuring the usual surprises and snubs. Netflix walked away with more nominations than any Hollywood studio at 24, the first time that an online streaming producer has beat out the industry stalwarts. Netflix received its first Best Picture nomination just last year, after giving Roma a limited theatrical release in order to be eligible; films must have a minimum 7-day run in cinemas in order receive a nomination.

This time around, both The Irishman and Marriage Story were given wide releases prior to going live on Netflix’s online platform. It’s an expense that the company would normally avoid in its regular release schedule, however executives are likely to walk away more than satisfied that the extra spending was worth it, and even more so if they secure a golden statuette. Why are studios so invested in winning big at the Oscars? And how much are they willing to spend to do so?

How much does an Oscar cost?

It depends. Some films can spend as much as $30 million courting Oscar voters. Others have gotten through the gate for relatively little. In last year’s race, campaigns for films Roma, A Star is Born and First Man reportedly all surpassed the $20 million mark. By contrast, the entire budget for 2017’s Best Picture winner Moonlight was only $1.5 million. Though an expensive campaign obviously doesn’t guarantee a win, studio spending is increasing every year, according to industry sources. There are several reasons this may be the case.

The swathe of streaming companies that have recently entered the already crowded field means more competition in attracting the attention of Academy voters. Also, year in which there are no clear frontrunners tends to increase spending, as more of the nominated films try to inch out ahead of the pack.

Another factor to consider is the number of categories in which a film seeks nominations. Films that mount campaigns for multiple actors, such as Marriage Story and The Irishman, which have both received nominations for three actors apiece in this year’s race, could be expected to spend a lot more than star vehicles that highlight the talent of a single actor, like this year’s Joker did for Joaquin Phoenix.

If you’re wondering what a studio could possibly spend $30 million on for an Oscar bid, the answer apparently goes way beyond member screenings. Last year’s well-funded but ultimately unsuccessful Best Picture campaign for Roma saw Netflix sending around branded cushions and 200-page books of stills from the film, alongside the usual slate of industry screenings and lavish premiere parties, plus the wider cinematic release that made the film eligible in the first place.

Nine films are nominated for Best Picture in 2020. They are: 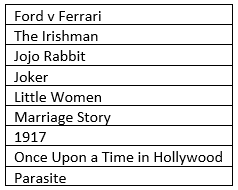 With nearly a month still to go until the ceremony, the race is hard to call. Joker leads the pack in number of nominations with 11, however the film was critically divisive, and historically the Academy has shied away from honouring comic-book movies. Following Joker are both 1917 and Once Upon A Time… In Hollywood, each with 10 nominations. Both films did well at the Golden Globes, where 1917 was awarded Best Motion Picture – Drama, and Once Upon A Time was similarly honoured in the Best Motion Picture – Musical or Comedy category. Currently TAB is offering the lowest odds on Once Upon A Time at 2.50, followed by 1917 at 3.50.

There is a lot less contention in the Best Actor / Actress categories, which are widely expected to go to Joaquin Phoenix for Joker and Renee Zellweger for Judy, respectively. With such a lack of contention, films are likely to place a lot more of their focus on the Best Picture category, and possibly those for Directing and Writing.

What does a win mean for studios?

The obvious answer is money – films can often expect higher ticket sales if they attract significant awards buzz. It’s not just about winning either; films can receive a huge bump to their box office following news of significant Oscar nomination. Last year, Fox Searchlight’s The Favourite got a 212% jump in box office revenue the weekend after it received nominations for Best Picture and its three leading actresses. The previous year’s Best Picture winner The Shape of Water got a 171% bump in box office the weekend after its nominations. For films like these with a modest budget, Oscars provide the kind of publicity they literally cannot buy. A targeted campaign to get a small pool of Academy voters to see your film can be a lot more cost effective than national or international marketing drives.

However, financial gain can’t explain the whole attraction. Despite harsh criticism in recent years for lack of diversity and representation, the Academy is still the biggest kingmaker in Hollywood. The awards are as much about prestige as they are about the bottom line.

For smaller studios, Oscar notice is important to secure funding and greenlight future projects. For big studios, it is likely to be more about their professional reputation in the industry. Most actors working in Hollywood don’t have a stake in the box office receipts, but rely on awards attention to secure future roles and maintain their professional credibility (some more than others). If a studio like Disney or Warner Bros can demonstrate that their films are taken seriously by the Academy, they will have more luck convincing big names to join their projects.

For Netflix, the drive to win Best Picture is a little different. Since entering the production business in 2012, Netflix has fought tooth and nail to be taken seriously. Often shunned by big studios and traditionalist filmmakers (such as Stephen Spielberg, who called for the Academy to disqualify films made by online streaming companies last year) Netflix has worked hard to attract world-class talent to its projects. Their $30 million campaign for Roma is believed to be the most expensive ever undertaken, costing twice as much as the film itself. But that spending appears to have already paid off, as it reaches the mantle of most nominated studio for the first time just one year later.

The 92nd Academy Awards ceremony will take place on 9 February.