The Coronavirus Situation in China; Update from Phoslock Environmental Technologies

The rapidly spreading coronavirus infections have led to the lockdown of 3 cities in China, cancelling of Chinese New Year festivities with the puzzled global public health experts to understand, track, and contain the new virus.

There are notable number of growing cases reported that are affected by the outbreak of the virus in China. With hundreds of infections reported by Chinese health officials, there are cases being reported even from countries internationally, including the US, where the first coronavirus infection was identified in a traveller returning from Wuhan on 21 January 2020.

According to the Centers for Disease Control and Prevention (CDC),

The spread of the coronavirus has not only raised the health concerns but has taken a toll on the Chinese businesses, tourism as well as several other aspects of the economy. Travellers to China are being cautious, lockdowns in cities and transport system have put the commerce to a halt in some parts of the country.

The latest situation reports on coronavirus by WHO confirms the following: 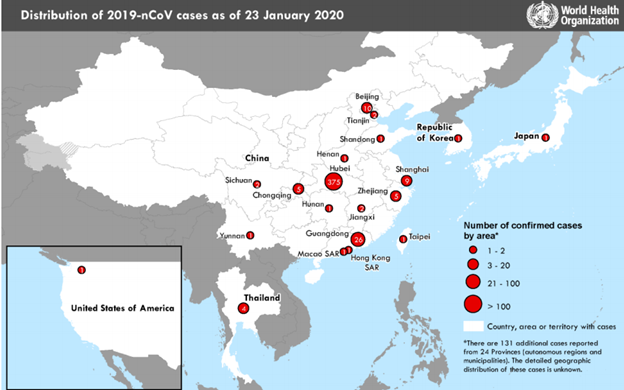 CDC considers this is as an extremely serious public health threat and travel advisories to China have been issued by the governments across the globe.

While, the local government in China has temporarily closed the area’s outgoing airport and railway stations and suspended all public transport in Wuhan, where the situation is worsening with increasing number of cases.

Amidst this worrisome situation in China, Phoslock Environmental Technologies Limited (ASX:PET) provided update concerning its projects and personnel stating that there has been no impact on PET’s business due to the coronavirus and that none of its staff has been affected by the same.

In China, ASX-listed global environmental company, Phoslock was formed to help remediate the massive Chinese algae and water pollution problem and currently has several agreements for marketing and co-operation with various environmental companies and government agencies.

Moreover, the Company notified the Chinese government’s robust measures to minimise any further spreading of the virus particularly around the Wuhan area.

The Company’s application and engineering teams in Wuhan during September and October 2019 completed the first Phoslock applications.

The Company notifies that further Phoslock applications are scheduled for the months of April & May in the current year, only if local conditions are favourable.

All About Phoslock Environmental Technologies

Headquartered in Sydney, PET has global presence with offices across Brisbane, Beijing & Changxing, China; and Manchester, UK and ten other countries where it is represented by licensees, distributors and agents, like:

PET manages the increased array of projects both in China and elsewhere, which comprises of the following:

In addition to the above, PET secured the exclusive global licence to produce, commercialise and distribute a unique new product which can be reused after removing phosphorus from polluted water. Furthermore, a development team has been established by PET to advance the product to full commercialisation and commercial quantities of the same are anticipated to be available by mid-2020s.

Centers for Disease Control and Prevention has taken steps that have been implemented on ground level in response to the risks asserted by the virus including:

CDC believes that there can be identification of more cases in the coming days, including the US. Moreover, the person-to-person spread is also expected to occur further and persist for some time.

Since the investigations are ongoing to learn more about the occurrence, spreading and other aspects of the virus, the people need to be extra cautious in public gatherings.