On the close of market on 18th December 2019, the S&P/ASX200 stood at 6851.4 points, with a rise of 0.1 point. However, in the below article we will be discussing about the four stocks with bigger bites on ASX, possessing market capitalisation of more than $5 billion. These companies have big businesses in multiple regions as well as products. Let’s have a look at the four stocks under discussion.

Treasury Wine Estates Limited is primarily engaged into international wine business. The company is also in the production, sales and distribution of wine.

TWE recently announced that BlackRock Group (BlackRock Inc. and subsidiaries) has made a change to their substantial holding in the company on 13th December 2019, and the current voting power stands at 7.22% in comparison to the previous voting power of 6.21%.

Also, TWE has appointed Ben Dollard for the role of President for the Americas operations. However, the new appointment would be effective from 13th January next year.

The key personnel of the company addressed the shareholders and pointed out the following:

Crown Resorts Limited (ASX: CWN) is an entity, which has a presence in the business of international casino and gaming entity. The company also has businesses and investments in key international markets. The company recently through a release has announced to pay interest of A$1.22 on security, which would be paid on 16th March 2020.

Crown, through a release dated 8th November 2019 announced that it has wrapped up the purchase of One Queensbridge Development Site. The company stated in the announcement dated 21 August 2019, that it had reached agreement in order to purchase the 50% ownership interest of Schiavello Group in the One Queensbridge development site and all pre-development assets.

The company recently released its results for financial year 2019, and outlined the following:

Coles Group Limited (ASX: COL) is in the retailing of daily usage products like fresh food, groceries, household goods etc. Coles recently announced that The Vanguard Group, Inc, and its controlled entities has become a substantial holder in the company, with voting power of 5.007% on 26th November 2019.

At the 2019 Annual General Meeting, the Chairman addressed the shareholders and pointed out the following:

Coca-Cola Amatil Limited (ASX: CCL) is engaged in manufacturing, distribution and marketing of beverages, which officially got listed on ASX in 1970. The company through a release dated 29th November 2019 announced that it has appointed Ms Penelope Winn as an Independent Non-Executive Director, which came into effect on 2nd December 2019.

Recently, the company updated the market with the results of 1H FY19, which are as follows: 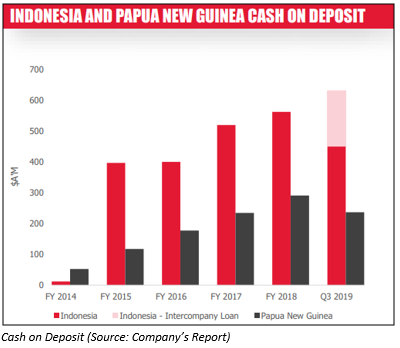 Also Read: How the company is well placed for growth in 2020?